So, I turned 43 the other day, celebrating my passage into another year with dinner and dancing with friends, a return of the Memorial Park Concert, and some quality time with the family. 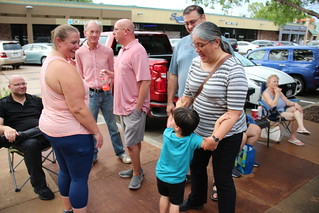 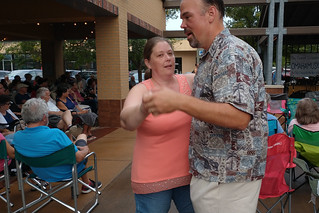 We kicked things off on Friday with a trip out to Rockbrook for some outdoor music courtesy of the Steve Raybine Band. There was a passing thunderstorm that got things nice and wet to start off, and it left me worried about the prospects of dancing outdoors, but it cleared up in time for me and a handful of my friends to hit the floor once the band started up. They played jazz instead of the swing music I was used to, but the beat was in eight-count and I was able to keep time with Vivian and a few other follows for a dance or two.

Afterward, we headed down the street to Village Inn at 108th and L — a tradition from my old days of jitterbugging when the dance would run until midnight and Village Inn was the only place open. This one closed at ten, but that was more than enough time for us to have some pancakes and pie together with some goofy conversion to cap off the evening (and a card from Dan). 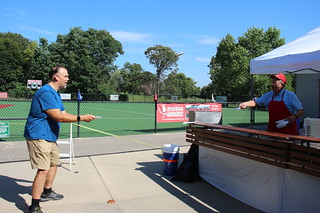 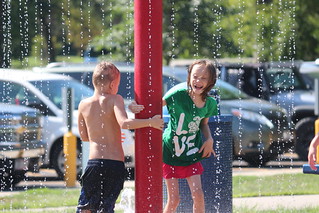 Aaron had an early baseball game the next morning at 9:30 AM, so we headed down there to watch him play for a bit (as well as pet a baby bulldog, which happened to be for sale). The Pancake Man was there as well, tossing pancakes for folks to catch, so I nabbed a couple and we had a nice little breakfast together.

It was still hot and muggy outside, so the kids spent some time cooling off in the spray-ground, which will likely be turned off in the next week or so as summer officially comes to an end. 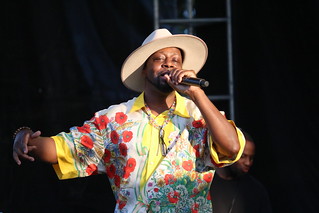 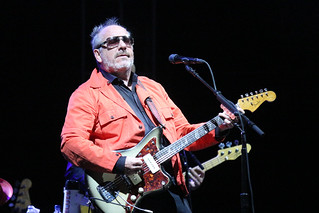 On Saturday night, Vivian and I headed down to Memorial Park for the return of their annual free concert in Omaha, which I’d been looking forward to for months. I’d been a fan since 2010, when Kansas, Styx, and Foreigner all played the same night — and I got a T-shirt to mark the occasion. This year, they had local band The Firm kicking things off, followed by Wyclef Jean and then Elvis Costello to headline. I wasn’t familiar with any of the music, but I was quite happy to nab a spot on the green and enjoy it with Vivian as the sun went down. I was expecting it to be hot and sweltering again, but we found a spot in the shade, and a steady breeze made things just perfect.

Vivian and I both enjoyed Wyclef the best, who had the audience waving their arms, dancing, and spinning things in the air as he played guitar with his mouth and actually climbed up the steel supports on the stage just for kicks. He played a variety of music and did some freestyling in Spanish and French. I enjoyed Elvis Costello as well (who glowed red and green) during the show, though the only song they played that I was familiar with was Pump it Up, which came at the end. The night was capped off with a fireworks show, and we just happened to plant our chairs within a few feet of where they were going off, so we got a monumental eyeful as every corner of the sky was ignited with rockets’ red glare. 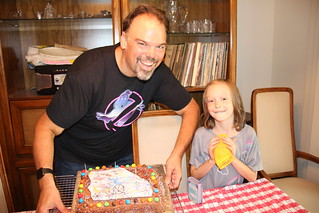 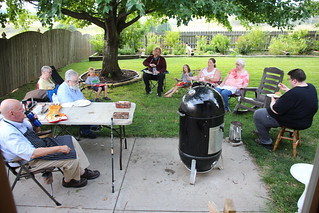 Sunday was my actual birthday, and I spent most of it with the family. Vivian made me a tasty breakfast burrito to start things off, and later on I got a few cards from Hannah and Aaron, along with some presents — a new set of saddlebags for my bike from Vivian and a game and other fun things from the kids. I also went by Walmart to get a new, goofy T-shirt to wear for the day.

At dinner time, the kids and I walked down to my parents’ house for dinner. Vivian and her folks joined my brothers and my parents as we had some hamburgers that my dad smoked for us. We ate outside and then had some cake, which Hannah happened to make (and bake) all by herself. She even decorated it with a drawing of our family riding bikes together, which was very sweet.

After dinner, I opened a few more gifts inside, which included a cordless drill from my folks and some snacks from Nathan and my in-laws. Then we watched some photos Nathan took from a recent trip to Michigan, where he happened to drop by our neighborhood in Kentwood. I popped open a bottle or two of Cheerwine and we finished off the evening playing some goofy games on Uncle Jonny’s Switch before calling it a night.

I was very happy to be able to grow older once again with our family all around! I hope to do this all over again next year and for many more years to come.