It’s been another busy week leading up to Vivian’s birthday on Sunday, which meant working in trips for gifts and decorating cards in-between all the other activities we have planned (as well as the usual work-week stuff). 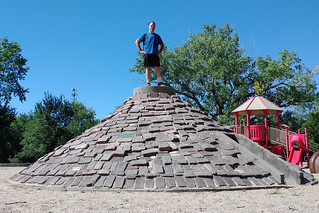 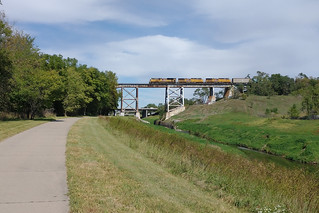 I’ve been getting as many lunchtime bike rides as I can fit into my schedule, enjoying the fall weather and burning off such things as root beer floats in the break room and chicken fried steak at a pro-life luncheon, where we got to hear from Dr. Ed DeSimone of the Creighton School of Pharmacy. I’ve really enjoyed seeing such things as the odd “volcano” covered wit bricks from the Brandeis estate at Democracy Park, as well as odd sights as a Forrest Gump bench and remnants of historic old train tracks along the Keystone Trail and in south Omaha. I even got to “race” a Union Pacific train on my way back to work. 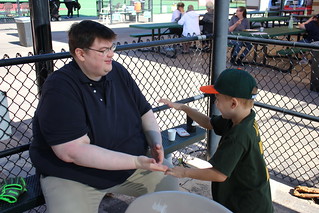 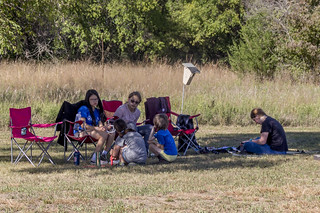 In the meantime, Aaron had his last baseball game at All-Play, giving high fives to the team members rounding first base and having a picnic lunch with us afterward. Uncle Jonny came by to watch him play one last time as well, and I think Aaron was very happy he came by.

In the meantime, Hannah had another camping trip with her little friends from American Heritage Girls. She camped out overnight in 40 degree weather, which made it hard to sleep but still warm about to spend the night playing with “Pop-Its” in the tent with Sammy — something she drew a picture of afterward to commemorate. 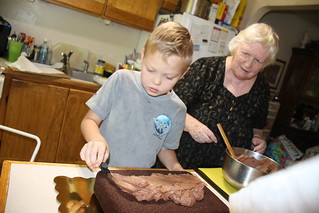 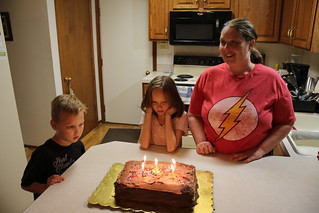 Then on Monday, we celebrated Vivian’s birthday, which required several days in advance of preparation. Grammy helped Aaron bake an decorate a cake on two separate days, letting him do everything from crack the eggs to mixing the batter to slathering on the frosting afterward. I trimmed Grammy’s hedges in the meantime, but also facilitated some trips to buy gifts with the kids and scheduling time to stealthily decorate some homemade birthday cards.

Then on Vivian’s big day, I took her down to Osaka in La Vista for a dinner of sushi, sashimi, and fish salad together as the kids had Happy meals with my folks. We returned afterward to have some of the cake Aaron made before returning to home to open a few presents, which included a Pop-It for Mommy, an avocado keychain, and a T-shirt from the Chosen, among other things.

Happy birthday, Vivian! I’m so happy to be able to grow old with you.