We’ve hit Peak Fall and are enjoying some of the best weather of the year, making the most of the Great Outdoors before winter rolls around. 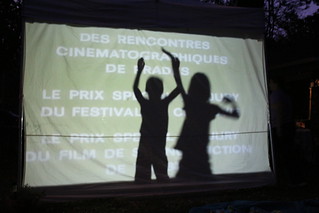 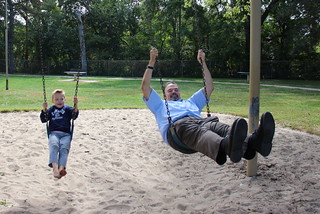 Last weekend, Jack and Donna’s neighbor Toni invited us over for an outdoor movie night in their yard. We dropped by with the kids to have some chili dogs and potato salad as they played on a few of their swings as a reel of weird, old cartoons played on their makeshift bedsheet-turned-movie-screen. I think the kids had a little more fun making dancing shadows behind the screen rather than anything that happened to be projecting on it.

The next day, we stopped by Ralston Park after church, just because the weather was so absolutely gorgeous. We got some McDonald’s for lunch and then let the kids run around a bit on the playground afterward. Aaron and I both hit the swings for a bit, and then we practice some martial arts together afterward. 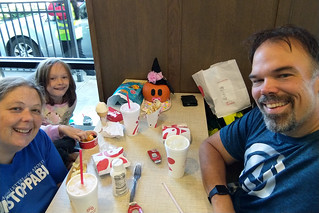 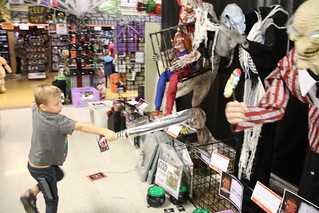 I kept busy the following week with an Education Program at work, which involved me putting together presentations and then doing a group photo hanging from a ladder in a hotel lobby, which was interesting. I still had time to bike down to the local Chick-Fil-A for lunch with Hannah and Vivian after BSF on Thursday. I’d been hoping their play area (which Hannah is still small enough for) would be open, but it wasn’t. We still enjoyed having some chicken together and seeing some of the restaurant’s pumpkin décor.

Then on Friday, we took the kids down to Mangelsen’s to look for some Halloween costumes. Hannah decided to be a Pink Power Ranger, while Aaron wanted to be a Cat Ninja. We couldn’t quite find a suitable cat or ninja, so he decided to be a Skull Ninja instead, which seemed to work just as well. 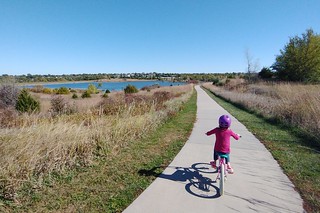 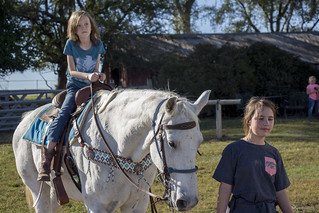 On Saturday, Vivian took Aaron clothes shopping while I took Hannah on a lovely bike ride around Walnut Creek Lake. I showed Hannah the “secret” entrance via the tunnel near Santa Fe Circle, which went through a tunnel under Highway 370 and through a bit of woods before coming up to the lake. Hannah and I pedaled around the entire lake together, stopping to get a closer look at the water (and a stray leaf) and stopping at a playground before circling back.

On Sunday, Pastor Ron donned a dreadlock wig to talk about Samson as the kids learned about the Ten Commandments. Then that afternoon, Hannah did a little horseback riding with her friends with American Heritage Girls. She’s been learning about taking care of horses as part of earning a badge with her group (as is Sammy), and she wound up riding for 45 minutes while on horseback for the first time. 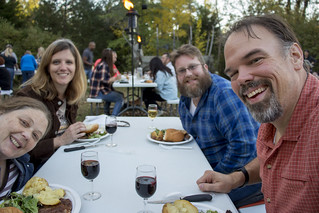 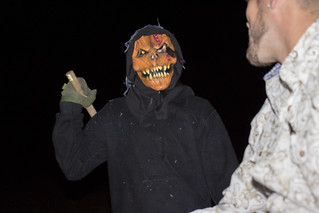 Capping off the weekend was a trip to James Arthur Vineyards for a Haunted Hayrack Ride. It’s an immensely popular event, with tickets typically selling out in less than half an hour once they go on sale. We bumped into our friends Jenny and Kody while we were there (who I hope still read this blog, since I mentioned it!) and had some ribeye steaks and wine together for dinner (with Kira the dog begging for scraps). Owner Jim Ballard told a few “true” ghost stories to the group about such characters as local ghost Charlie Werner (who has a port-style wine named after him). Then local musician Chris Sayre sat down to play music on a saw and tell a few ghost stories, such as the “Legend of Blackbird Hill.”

Of course, there was also a haunted hayrack ride, which mostly involved us puttering around the vineyard in the dark while a lone guy in an orange mask chased after us. It was a beautiful evening with or without the haunting, though, and we were even allowed to take glasses of wine along on the trip, none of which spilled.

Halloween’s just around the corner, and next on my agenda will be scrambling up some costumes for Vivian and me — as well as a family trip to Sioux Falls right before Jenny’s Halloween party. The fun never stops!

Fall is well underway, and that means enjoying as much time outdoors as we can before Nebraska turns into an arctic wonderland. 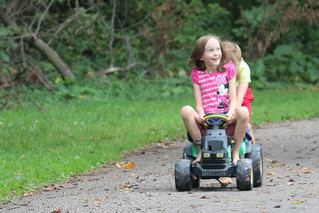 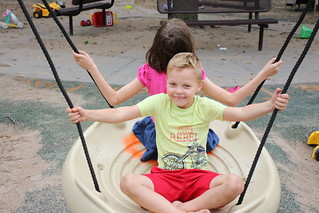 On Friday last week, Aaron had the day off school, so I rode down to Elmwood Park to spend a lovely lunch break with Vivian and the kids. This park is known for having an assortment of stray toys, and Hannah found a little cart that she and Aaron took turns pushing each other around in. I also gave them a good swing in the saucer for a while, and they finished off with a little exercise in the workout area.

Then on Sunday afternoon, I decided to use up some leftover ground beef by showing the kids how to grill a few hamburgers for lunch, which they cooked and ate with us. 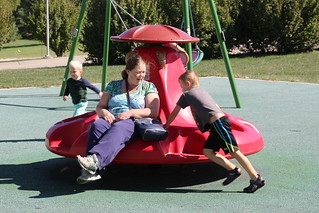 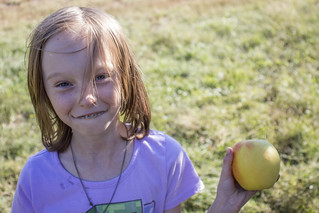 Sunday was also the last day of Nebraska City’s Applejack Festival, so we decided to drive down to Kimmel Orchard for some apple-picking. We got to see how the kids measured up before letting them take a spin on the playground. Then we took a hay rack down to the orchard, where we filled a couple bags with Winesap, Jonathan, and Braeburn apples, to name a few. We also stumbled upon a nature trail and “Natural Playground” that the kids both liked playing in for a bit — partly because of the shade from the sun blazing down overhead.

We spent a little more time on the playground before heading home around closing time. I stopped by Union Orchard hoping to get an apple pie, but they were closed, so we may have to leave that to Vivian’s devices later on. (No sour grapes.) 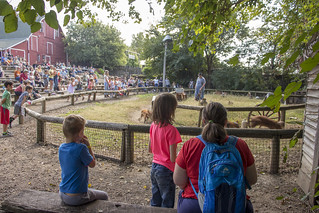 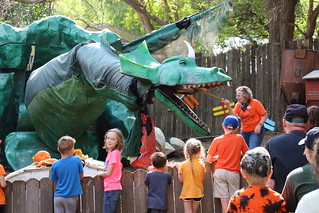 Then on Tuesday, I took the day off so we could spend a day at Vala’s on their Homeschool Day. The kids have been to Vala’s every year of their lives so far, and Hannah said it was her favorite day outside of Christmas and her birthday. We’re old pros at seeing all the attractions and had it down to a science by now — hitting Bunnyville and the Pumpkin Mine first before doing some trikes and then catching a Train Ride while the line was short. We did the jumping pillows after that and checked out the duck races before taking a few spins around the Highway 6 bike track — both on the family cart and individually (even Vivian).

We got some fries for lunch before taking a dip in the corn bin, where I helped Hannah and Aaron get completely buried. We headed back for some Pig Races around one, and Hannah got to be a Pig Leader this time. We got some time on slides and a tractor before going to see Xander the Dragon, and Hannah and Aaron got a few balloon bracelets from an old Jitterbug friend along the way. 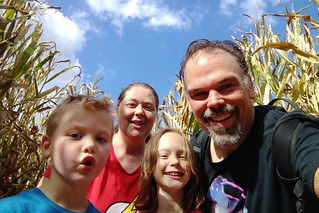 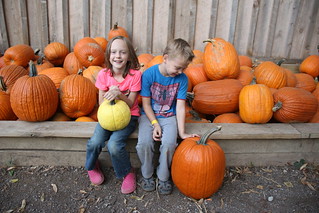 We hit the schoolhouse, the haunted house, and the Big Chair before going down to Prairie Hill Town, where the kids got to run on a hamster wheel (as did I) and run around a bit more. We hit the obstacle course next, took a swing at a “high striker” or two, before taking a few trips down the Big Slide. Then we went through the Corn Maze together as a family for the first time, which was a bit of an adventure, but I had the map on my phone that helped us get through fairly easily (much to Hannah’s irritation).

We got some more of a maze fix in the Pirate Maze for a bit before dropping by the spider web, getting a pretzel, and visiting the Storybook Village. We also took the kids to the petting zoo to feed some goats before having some donuts (which we watched being made that morning) and then picking out a few pumpkins to take home. Aaron picked out a giant 32 pounder, which I had to lug a ways before getting a wheelbarrow to haul it to the car. I’m hoping we can turn our produce this year into something interesting, either a Jack-o-Lantern, some roasted seeds, or anything other than a rotting mess to leave in the garden.

It was a bit exhausting to hit a pair of our favorite fall events within just a few days, but it was worth it. Now we just have to get ready for Halloween — and the chain of Thanksgiving and Christmas events that follow shortly thereafter, of course.