We’ve had some lovely fall weather over the past few days, allowing us to enjoy the great outdoors a bit before winter comes. 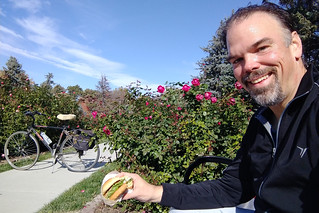 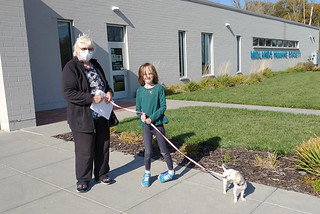 I was able to nab a free sandwich at Chick-Fil-A on Friday and pedaled it all the way to Memorial Park for a lovely lunch among the rosebushes — which are still in bloom even in November.

In other news, Grammy just adopted a little dog named Bella, who’s a poodle mix and seems very sweet, albeit nervous — especially around men. Hannah and Aaron got acquainted with her for a bit and also took her for a walk or two down Bellevue Boulevard. 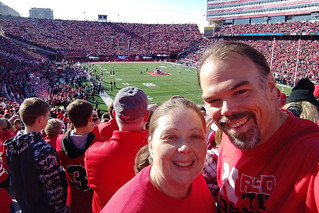 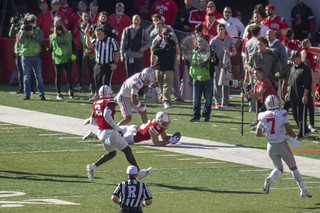 We had perfect weather Saturday for a Husker game down in Lincoln. I won a pair of free tickets at work and got to leave the kids with Grammy for a bit as Vivian and I headed down to watch the game. It seemed to be a good game — even though the Huskers lost, it wasn’t the blowout everyone was expecting. There was one particularly impressive interception in the first quarter that I managed to photograph, and it was particularly fun to watch the game live — especially with the crowd getting riled up after a few bad calls.

We had some Runzas for lunch and were able to spot a few of our friends in the crowd of 84,000+ (though I’m sure there were a few more). At the end of the game, I recorded an impression of Rob Schneider’s character from Waterboy, just to amuse my friend Richard, who uses the clip as a meme. 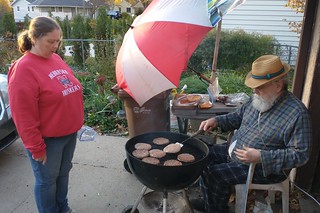 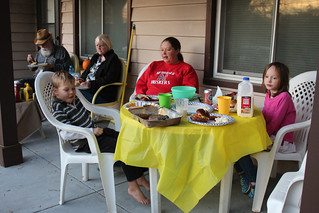 Then that evening, we stopped by Grammy and Pop-Pop’s to have a little “porch party,” inaugurating their new front porch. They’d had work done replacing some beams, adding new concrete, and removing a line of massive hedges, so celebrated with burgers, barbecue potato chips, and egg nog — a menu entirely of Aaron’s invention. 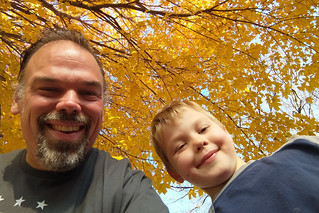 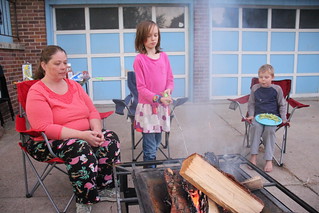 Then on Sunday, I spent some time with Aaron enjoying the autumn leaves at Halleck Park. The leaves are at their peak, so it was nice to get out of the house (where Aaron’s been obsessed with math problems) and walk among the fall colors for a while.

Then back at the house, we brought out the firepit to roast some hot dogs with the kids on the driveway (and even a s’more or two). Daylight saving time ended, so it was dark an hour sooner, so I brought out the laptop so we could watch Beauty and the Beast (the original animated version, of course) by the fire. We even got to roast some marshmallows together before heading back inside.