We just got done with another lovely Thanksgiving weekend here in Omaha, having all four grandparents, Uncle Jonny, and even Harold’s mommy under one roof once again — something for which to be truly thankful. We’ve also kicked off our Christmas season in style, getting our holiday in gear well before the start of December. 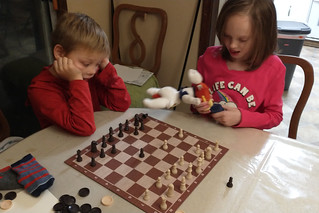 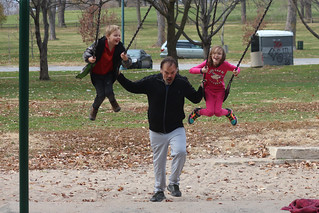 The fun started Wednesday, as we took the kids down to Elmwood Park before a cold snap on Thanksgiving Day for a romp in the park. We still had a few colorful leaves on the trees to do a nice family photo or two, and the kids got some lunch and had some fun swinging, running around, and getting some exercise in the park.

In other new, Aaron’s had some interest in playing some analog games, so I showed him and Hannah how to play checkers and chess, which provided some fun away from a screen for a change. 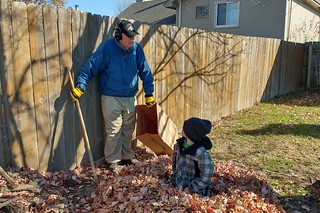 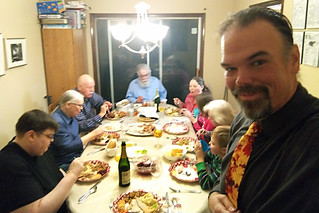 Then on Thanksgiving Day, Vivian and Jack made a lovely Thanksgiving Dinner together as I kept Aaron occupied with a walk down to Grandma and Grandpa’s house. They had a few leaves in the backyard that needed raking, so we helped them with that a bit in the nearly freezing (albeit sunny) weather outside. My dad also made some Swedish rosettes, which he shared with us at our house when everyone gathered for Thanksgiving Dinner.

We had the usual assortment of food — Taber salad, stuffing, potatoes, green bean casserole, and roast turkey, of course. We all ate together and had pie afterward, and Hannah got to open a few belated birthday presents from my folks somewhere in-between, which included a Baby Yoda from Uncle Jonny (which Hannah inexplicably named “Clap.”) My mom also gave Hannah some nail polish, which she helped Hannah put on before heading home. 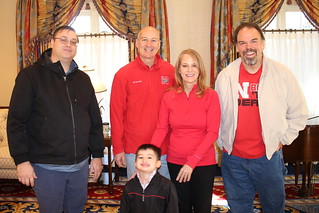 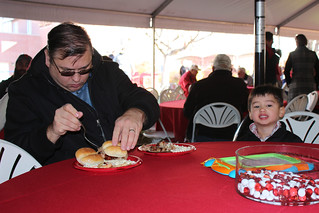 On Friday morning, I went down to the Governor’s Mansion with my friend Phil and his son Gabriel for a little Tailgate Party with Pete Ricketts. They had pulled pork and chicken with pasta salad from Hy-Vee. We even got a couple cans of “Dear Old Nebraska Brew” to wash it all down. It was still a chilly morning, but quite nice under a pavilion outside with the warming lamps. We also got our picture taken with the Governor, of course. His son Roscoe took it for us, who coincidentally took one of me and Vivian in 2015. 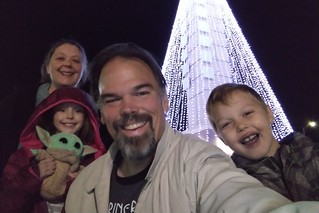 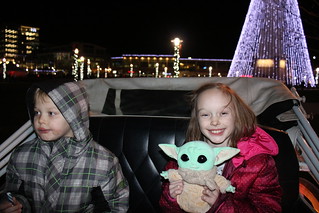 We kicked off the Christmas season that evening with the kids down at Aksarben Village. They lit up the spire at Stinson Park with a cone of lights, and they had hot cocoa for the kids and free carriage rides around the park, which was quite lovely.

We were a bit hungry afterward and stopped by Golden Mountain for a little dim sum, primarily to show Hannah what a “real” dumpling looked like — as opposed to the rubbery toy she got for her birthday. 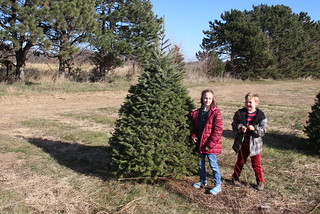 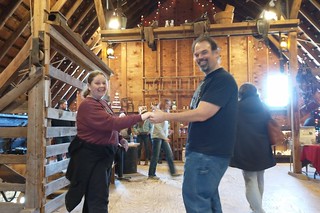 Then on Saturday, we had some lovely weather to go up to Santa’s Woods and pick out a Christmas tree for this year. We took a hayrack ride over to the “woods” and said hello to Santa Claus along the way. The kids got a few pictures with him and on a nearby sleigh before we headed through the rows of pine trees to pick out our own. The kids managed to find a seven foot Douglas fir on one end of the lot that seemed to do, so we had it cut down and strapped to our car to take home.

Before we left, we stopped by a few selfie stations for some photos and then went back to get some hot cocoa. We also got the kids a s’more kit to roast some marshmallows over an open fire, which they had going in perpetuity. Twinkle the reindeer was also back again, so we said hello to her. Most memorable for me, however, was dropping inside the barn to see the second floor, where Vivian and I had had a barn dance put on by GAMe back around 14 years ago, which brought back some fond memories. It’s because of that dance at Santa’s Woods that Vivian got introduced to the Omaha Jitterbugs — and me as a result — so it was quite special. 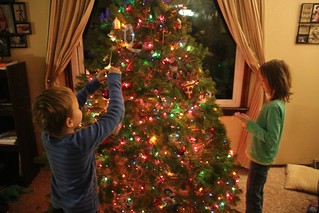 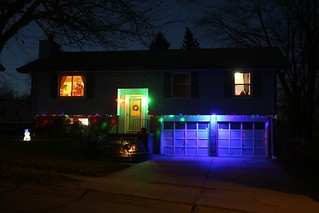 We got some McDonald’s for dinner and then we hauled in the tree and got it lit. I also finished decorating the house for a few nice nighttime shots once the sun went down. Then we showed the kids the movie Elf for the first time, which they seemed to enjoy. Aaron in particular was laughing nearly non-stop through the whole thing.

Then we continued putting on ornaments the next day, with Christmas music piped into our house via my Sonos speaker. It truly started to feel like Christmas once again.