Is it just me, or has time shifted into Warp Speed as we’re just a week or two away from Christmas? I’ve been scrambling to get Christmas gifts as we continue checking off all our holiday traditions as time flies by before the big day. 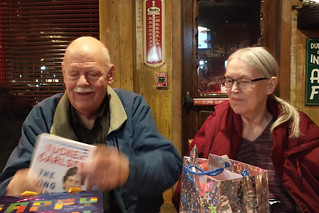 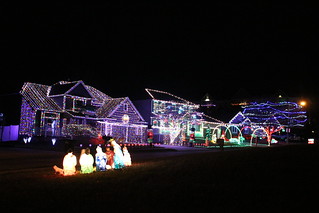 My parents both have birthdays in December, so I took them out to Famous Dave’s for some barbecue to celebrate. I got a two-meat combo with some brisket and burnt ends, and I had a couple gifts for my folks, which included a Tucker Carlson book for my dad and “The Baron’s Apprenticeship” by George MacDonald for my mom (a very specific request).

Then on Thursday, we went on a family Christmas lights tour together. Vivian brought the kids to my office first so they could say hello to the “angel” and see where I work for a moment. Then we let them run around Stinson Park (AKA Daddy Park) for a bit to get the wiggles out before we hit the road. We got some McDonald’s along the way and then went up Steinauer Family Lights on Larimore Ave. Vivian and I found this street on a tour bus a few years ago, and it’s quite the spectacle, particularly when you get out of your car and walk up close to it all. If it didn’t remind of the Griswold Family with the sheer number of light, they’ve got an inflatable Family Truckster on the roof just as a reminder.

We then drove through the displays in Linden Estates before making our way back to Omaha. 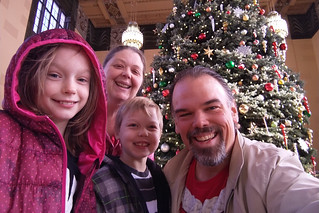 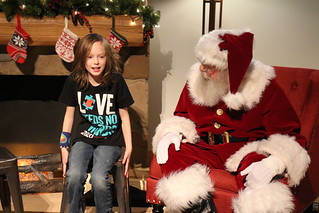 On Saturday morning, we woke up to our first legit snowfall of the season, just just under an inch in the metro area (enough to dust our pumpkins a bit). Then around lunchtime we took the kids down for some quality time at the Durham Museum at Union Station. We got an obligatory selfie in front of the big tree before going downstairs to see some photos of Billie Holiday and run through the trains a couple times. Some of the cars that had been closed off before, such as the executive board room and the toilets, were now open for viewing, which was fun to see.

We took Hannah and Aaron by to see Santa, of course (when he came back from his break of milk and cookies), and then we visited the trolley car and a few other exhibits before we felt worn out. Then we got a few treats at the café before heading home. 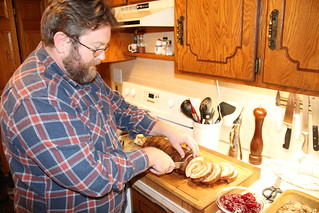 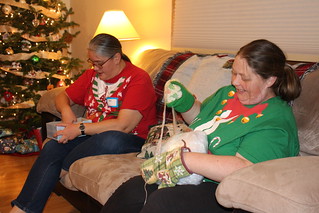 That evening, Uncle Jonny came to watch the kids as Vivian and I went to a grown-up Christmas party with Jenny and Kody and a few of our friends up in Bennington. Vivian and I got some festive T-shirts to wear just for the occasion, and Kody’s black poodle was similarly \ as well. Kody put together a fancy charcuterie board for starters and then served up a pork tenderloin for dinner filled with stuffing like a Swiss roll, and we ate it with some macaroni and cheese, Greek salad, and some sweet potatoes Vivian brought with us. Jenny made some pistachio pudding for dessert, which we had with some chocolate banana cake from Jen.

After dinner, we played a game afterward taking turns unwrapping a giant ball of plastic wrap filled with a progressive series of gifts from the Dollar Tree (an a $10 Amazon gift card at the end), and then we finished off the night with a round of Say Anything before heading home. 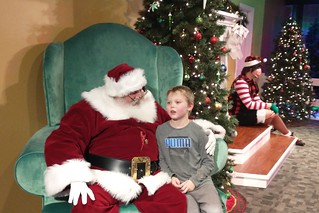 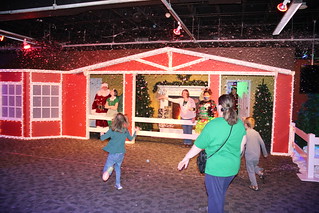 On Sunday, Vivian and I had the honor lighting an advent candle at church and reading a bit of scripture from Matthew for the “Love” week of Advent. Then that evening, we took the kids to the Children’s Museum. They had the same exhibits we’d seen back in August, but the kids still had fun throwing balls and making some Lego racecars to go down the Pinewood Derby track. Santa and his elves were there as well, so the kids got to pay another visit before running through some soapy snowfall together. We finished things off in the play grocery store and a few other exhibits for a bit before heading out, and I got wistful thinking of all the memories Hannah and Aaron have had at this place — and how they’ll be too old for it before long.

We grabbed some gas at Casey’s on the way home, and I grabbed a few slices of pizza for dinner, just to try it out. It’s less than a fortnight before Christmas. Hang on, tight everyone! Here it comes.