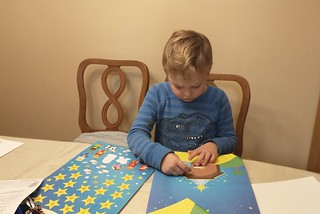 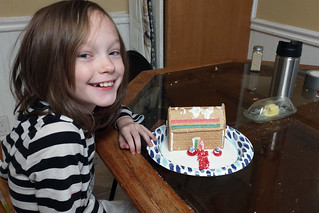 The Christmas season is whizzing by! The kids got a sticker poster at church for advent, which they’ve been busy decorating. Hannah got to make a tiny graham cracker “gingerbread” house at the CC Christmas party, while Aaron’s discovered the quadratic formula (which he asked us to “solve” for him). I also grabbed some half-priced meat from Aldi, which included a delicious beef tenderloin. I even got in a bike ride to work, despite the near-freezing temperatures. Otherwise, we’re basking in the glow of our Christmas tree from the comfort of our living room. 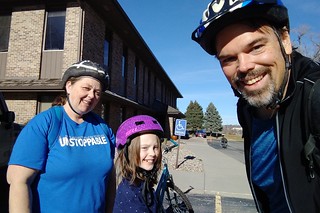 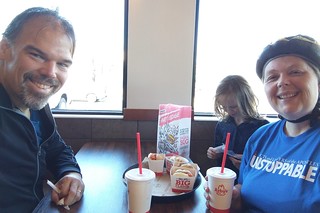 The temperature got up into the 70s on Thursday (a record high), so Vivian and Hannah dropped by the office for a family bike ride up and down the Keystone Trail. We pedaled down to Karen Park and then took the South Omaha trail up to 50th street, where we stopped for lunch at Arby’s before heading back. It was the first time Vivian had ridden her bike since before Hannah was born, so I was quite happy to have her along for the ride with us! 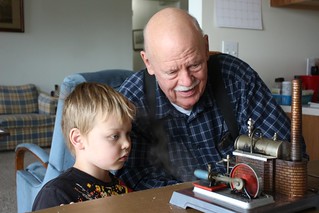 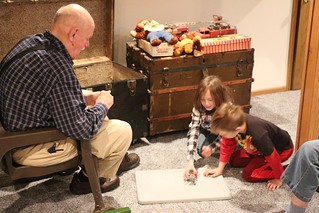 On Saturday, Vivian kicked us out of the house so she could have the place for brunch with the girls from WAG. I walked down to my parents’ house with the kids, where Hannah and Aaron did some exercises before grandpa shows them some of his old toys. He brought out a working model steam engine, which he got moving (and whistling) for us. He also had a model rocket-car that he’d made — and won a blue ribbon for.

Then we moved along downstairs, where dad showed the kids a few of his wind-up toys, which included an acrobatic little mouse. After that, we went to get some McDonald’s for lunch as Grandma made a paper “fortune teller” with Hannah and Uncle Jonny showed Aaron some games on his phone. Then we ate while watching some home movies on the TV before calling it a day. 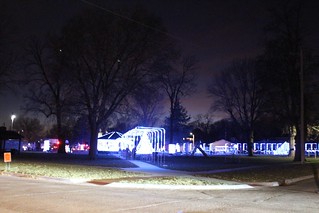 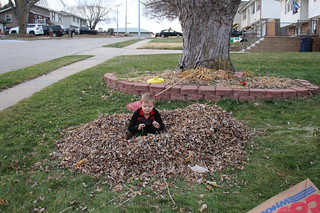 That evening, we drove downtown hoping to enjoy a drive-thru Christmas experience in Olde Town, but the line of cars rounding just a block or two was so slow that it took folks upwards of two hours to make the trip, so we gave up and went down to watch The Santa Clause instead. We did get a glimpse of Washington Park all lit up, however, so we may come back later and enjoy it on foot.

Then on Sunday, I raked up some leaves, which Aaron used to pretend to be a baby bird. 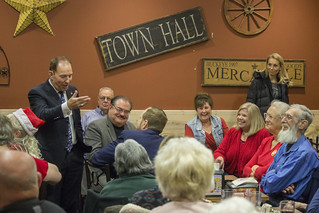 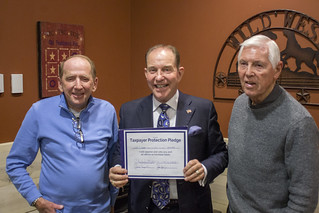 Then on Monday, I did a little politicking over lunch as Charles Herbster had a meetup down at the Pizza Ranch around the corner. The party room was standing room only. He talked about school choice, property taxes, and Critical Race Theory during a brief stump speech and then took a few questions from guests. He then sat down to sign the Taxpayer Protection Pledge at the end, which read, “I will oppose and veto any and all efforts to increase taxes.”

The primary election’s going to be very interesting next year, and I’m not even entirely sure which of the candidates I’ll be voting for. Hopefully I’ll get to bump into Jim Pillen before long and be able to say I’d met every candidate on one side of the aisle. (Carol Blood, the lone Democrat running, is actually my state senator, and she’s usually nowhere to be found.)