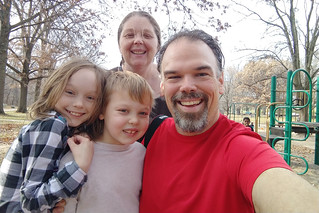 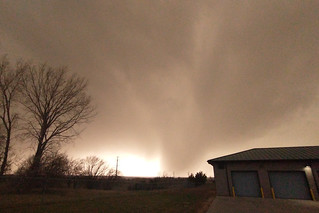 We’ve had some lovely unseasonable weather over the past week that made December feel more like springtime. I’ve continued riding my bike and even had a picnic lunch (with free Chick-Fil-A) during the week. Then on Wednesday, the temperature got up to the 70s, so we took the kids down to Elmwood Park for a little quality time on the swings and playground as well as a walk through the woods, where we found wild origami and a little shrine (in memory of someone named “Josh”).

Of course, this was also the day that a large line of storms came through much of Nebraska and Iowa, a line we’d been warned about for days that shut down schools and businesses all over town. When the storm finally rolled through, however, it did little more than thunder and blow a bit before it passed on by — and sent temperature back down to freezing. 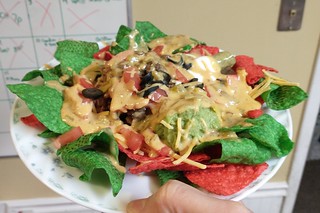 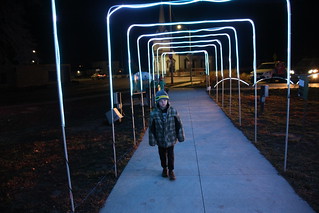 We’ve stayed busy with a handful of other holiday activities over the weekend, such as finishing up our Christmas letters. Vivian made some Nachos Navidad for us on Friday and then a giant set of sliders on Saturday, which I had with some spicy ketchup from Volcanic Peppers.

Then on Sunday, we took the kids down to Washington Park to see some of their Christmas lights. It was a lovely little walkthrough show, though we spent a little more time on swings than actually walking around, and it got a bit too cold for us to stay long.