Winter came rip-roaring back again last week, with a couple inches of snow and some frigid temperatures right just in time for a late Christmas party at work. 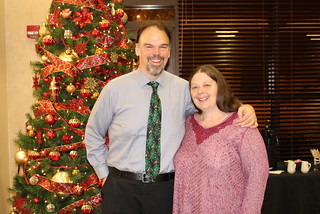 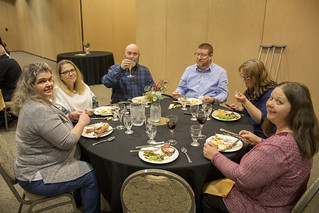 I was able to wear my new Christmas socks as Vivian and I went out to St. Robert’s to have some prime rib and salmon with a few of my co-workers as we belatedly celebrated Christmas together. All things considered, it was probably the nicest venue we’d had in a while, with better food than the Garden Café and much more room than the packed party room at Wheatfields. It sounds like most of my co-workers would very much approve of doing it again (even after Christmas).

Hannah got to celebrate Other Hannah’s birthday with her in the meantime as Aaron got some quality time with August and Gabriel playing Foosball at the Mills’. We also had a bit of an adventurous time driving in the snow-covered roads, but I drove slow and we avoided any serious problems along the way. The world was covered in a winter wonderland in the meantime, and Vivian spent Saturday roasting a turkey that she tuned both into dinner and later to soup. 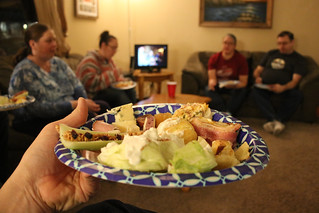 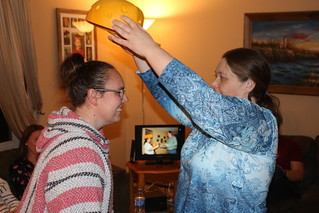 The following Friday, we hosted the long-awaited return of our Hors D’oeuvre & Cheese Party — our annual excuse to clean up the house and have fun and food with our friends during the post-Christmas doldrums in January. Vivian made some jalapeño popper dip and a bacon-wrapped baguette stuffed with three cheeses for our friends. Tamra and Ryan won our pig-in-a-blanket for their wedge salad bar, and Lexi won our cheese prize (a trio of erasers) for an asiago cheese with rosemary and olive oil. We were also joined by Jolene, who brought some bell peppers, Venche, who brought pigs in blankets, and Phil and Jen, who brought some a savory cheese croquembouche, an almond milk cheese with pepper jack, and an entire Spanish Serrano Ham from Costco, which came with its own mounting contraption, and they carved it with a knife that phil literally forged himself (with his own homemade forge).

Hannah and Aaron visited with Grammy, Pop-Pop, and Bella in the meantime, having some Papa Murphy’s for dinner and watching the Packers lose to the 49ers. They came home in time to bring Harold out to say hello and nibble on some leftover salad (and refuse to touch Jolene’s bell peppers) before we called it a night. It was a lovely evening, and it felt especially good to be having our friends over once again for a long-expected party.