We just got through a one-two punch of holidays (of sorts) here in Omaha, which naturally means spending time with family and eating too much food, per the norm. 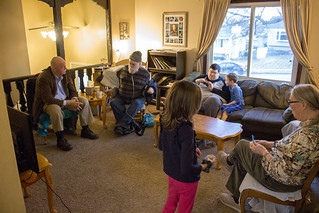 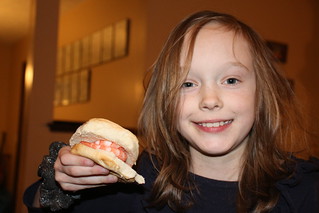 First up was the Super Bowl. I’m not a sports ball fan by any means, but any excuse to dish up chicken wings, chips and dip, meatballs, ham roll-ups, and various other high-sodium treats from our buffet table is fine by me. Hannah got into the game again dishing me up a plate herself (with a shrimp sandwich). Then we got to watch the Rams narrowly beat the Bengals in the fourth quarter amidst a slew of unforgettable ads and a half-time show that clearly wasn’t for me. (Shocker: there’s no 90s gangsta hip-hop on MY playlist. Dawg.)

The real fun was just having the whole family over — both sets of grandparents and both Uncle Nathan and Jonathan. We even got to bring Harold out for a bit, who had never met Uncle Nathan before. Even though our team lost, we still enjoyed the evening. 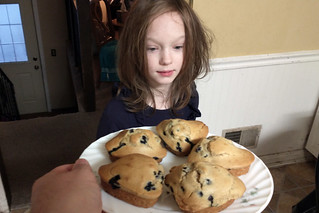 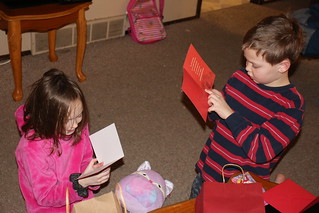 Then came Valentine’s Day. I got up early to make some blueberry muffins from scratch with our heart-shaped cast iron muffin pan. The kids has plenty of Valentine’s Day activity during the day, including a batch of Valentine cards (and pencils) I helped Aaron put together, and a party with the homeschool kids with Hannah, which she made her own Valentine box for.

That evening, we changed a few gifts with the kids, which included hand-drawn Valentine cards from me (and one from mommy) and such treats, such some bisque for Vivian a couple Pez dispensers for the kids (which Aaron figured out how to use right away). I also had a few toys for the kids, and Vivian had an “infinity cube” for me (so now I no longer have to borrow hers when I’m feeling bored). Then we had some pizza and watched Lilo and Stitch together, a movie none of us had seen but had several toys of from McDonald’s for some reason.