We’ve launched headfirst into spring, and the trees are exploding with blossoms as tulips and daffodils bloom in our front yard. The cold has persisted for a couple of days, but it’s also been warm enough to have ice cream on the front porch and bring Harold out to graze in the front yard once again. 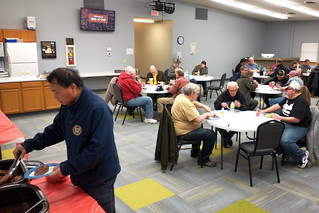 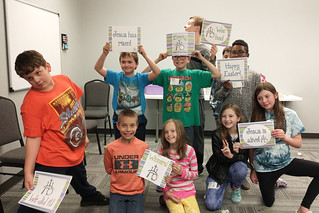 We also had a few fun activities at Wildewood. On Tuesday last week, the Men of God had dinner again, with spare ribs Woody smoked up for us his smoked and beans as Scott had everyone brainstorming about what a men’s group ought to look like in the coming year. Hannah also came by on Wednesday and got to do an Easter-themed “escape room” with her youth group (which was fun for me to watch through the window). 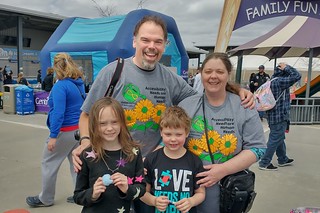 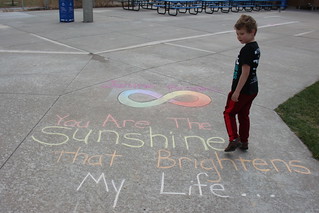 On Sunday afternoon, we took the kids to Omaha Funfest at Werner Park, sponsored by the Autism Society of Nebraska. Aaron got some time in the bounce house and I got to spin around on the carousel feeling nice and sick for a few minutes. Aaron and another boy got to play a legit game of chess together in the game tent while Hannah tried her hand at Jenga for the first time. Hannah got a painted tattoo and Aaron learned about juggling afterward. There were a few cosplayers on hand as well, featuring Ghostbusters and Star Wars characters, as well as a heavily modified “Stormy” mascot. They had a walk around the park before closing up for the day, and I did a lap with Aaron before heading home. 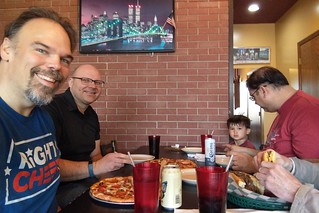 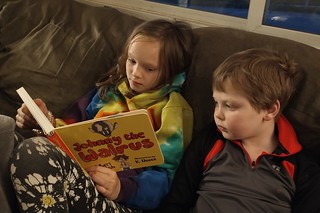 In other news, I got a couple pieces of political swag in the mail. First as my Daily Wire “leftist tears” tumbler, which came on the same day Elon Musk bought Twitter, which couldn’t be better timing. Next was a custom t-shirt I had made up for my Twitter handle, which I planned to wear at a certain rally later this week, just in case I’m seen by OANN, Newsmax, or RSBN and can get some free advertising.

I also wore this shirt on Tuesday, when I had meetup with a few friends down at Don Carmelo’s pizza in Rockbrook. I have events like this every so often with anyone who wants to talk politics “off the grid,” so I picked this little pizza joint to give them a little extra business after they were brave enough to host Jack Posobiec a few weeks ago. It’s darn good pizza, too.

I also got Matt Walsh’s book on the same day and had some fun reading it to Hannah and Aaron before bedtime.