Summer’s finally here, and that nmeans finding new ways to enjoy the great outdoors while tryinhg to stay cool at the same time. 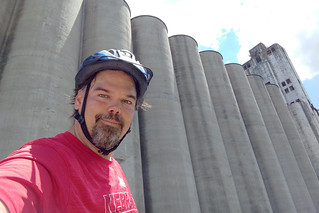 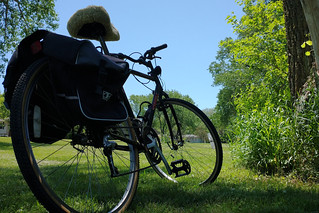 I had a fun time getting to know Omaha’s bike trails a bit better this week. I took a ride up the South Omaha Trail by the abandoned grain silos, which travelers can see clearly near the 480 interchange on I-80. I took a trip by Trader Joe’s the next day, and then I rode up to Esther Pilster Park for a lovely picnic lunch (and a nap) under some tall trees the following day.

It’s been fun being able to explore some of the hidden trails and parks in Omaha that you can’t exactly see from the main roads. I also seem to have gotten bit of a farmer’s tan, with a nice white outline of my Fitbit, in the process. 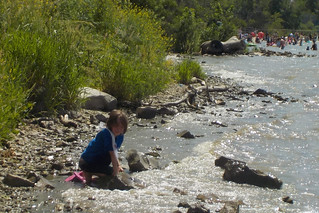 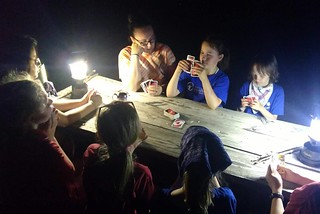 Over the weekend, Vivian and Hannah went camping together with the American Heritage Girls down at Lake Manawa. Hannah learned how to sharpen a knife and whittle soap, tie some knots, paint some rocks, play UNO with some friends, and practice hitting a volleyball.

She also got to find a “gooey” frog or two, something she’s always enjoyed doing while camping, and she also got to have pizza baked in a cast-iron Dutch oven for dinner (along with s’mores, of course). 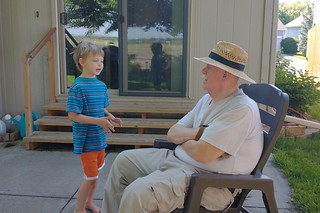 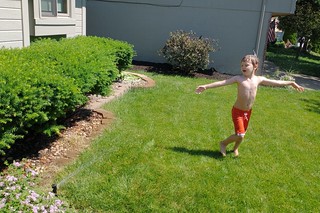 Aaron and I got to have some “guy time” in the meantime. On Saturday morning, we visited grandpa to help clean up some of the things he’d used to smoke the brisket we had on Monday. Then I helped to get the water turned back on for their lawn sprinklers, which Aaron immediately used to cool off while outside. He wanted to play some video games, and he eve found Uncle Jonny’s giant collection of old NES titles, but we were able to get him to draw out what he’d like to build in Mario Maker sometime on paper instead. 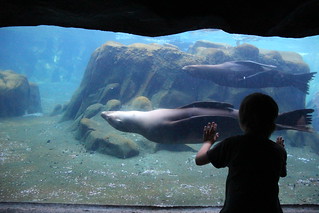 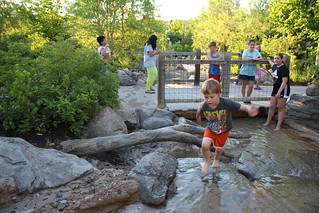 Then that evening, I grilled some burgers and fries for dinner (with avocado) and then took Aaron for an evening at the Omaha Zoo. We went to see the new Sea Lion exhibit first, which had some lovely viewing windows underground where we could see them swimming about. We got a bit sidetracked by the mazelike “Children’s Adventure Trails” on our way to the aquarium, and Aaron had some fun there climbing, sliding, wading, and hanging in a chrysalis as a few monkeys climbed overhead and prairie dogs ran about. Then we finished our visit seeing some puffins, penguins, jellyfish, and other sea life in the Scott Aquarium before things began to close down. Of course, no trip to the zoo would be complete without a visit to the wet, spinning globe or the lion statues, where Aaron got a few obligatory photos before we headed home. 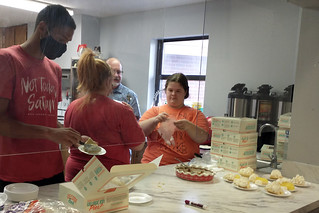 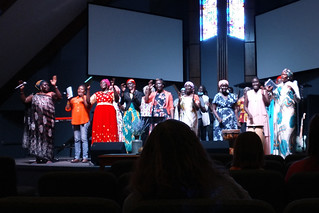 Vivian and Hannah returned home the next day. I took the kids by Grammy’s house to have some lunch as I trimmed some hedges. Then that evening, I went by Wildewood for Praise and Pie Night. We had about an hour of worship songs with a performance by the South Sudanese church singing Amazing Grace in one of their native languages (and garb). It felt like a spiritually cleansing time for myself, with the weight of trouble and turmoil in the world being ripped away in the light of God’s presence there in the sanctuary.

We had a bunch of pie afterward, and I got some peach and cherry for Vivian and the kids, along with some all-American apple pie for myself (with a scoop of vanilla ice cream, of course). 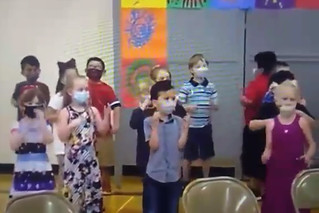 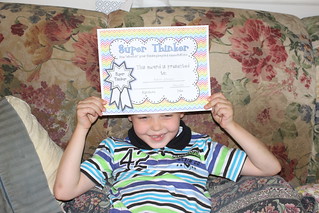 Another school year is winding down, which means a few end-of-year events with the kids. Aaron had a “virtual” concert at his elementary school, which I was able to tune into online. Naturally, it wasn’t the same as seeing it in person, but it was nice to be able to attend right from my office at work (and I even snapped a few pictures).

Aaron also won an award for being a “Super Thinker,” a rainbow slinky (which I hope lasts longer than ten seconds), and a tiny Octopus Sprinkler, which I set up for him and Hannah to use in the driveway to get a little wet on a warm evening. He also got to pick a book to bring home and naturally chose the most gigantic picture book I’d ever seen. (I suppose bigger is better?) Then the next morning, Aaron helped decorate a card to give to his teachers on his last day of Kindergarten. 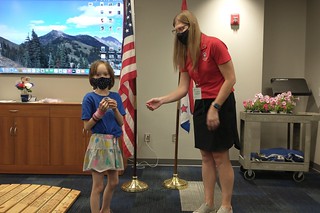 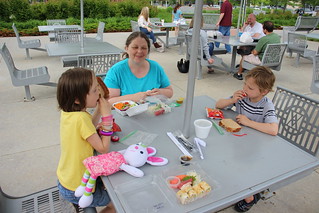 Hannah also had an end-of-year event with the American Heritage Girls. She’s only been attending for a month or two (and doesn’t even have a uniform yet), but she won a few patches as a “Tenderheart” and got to receive them at a little ceremony on Wednesday night.

Then with both of the kids out of school, we had a fun little year-end lunch at the park. I got some sushi from Ponzu around the corner, some of which I shared with Hannah. Then we let the kids play on the playground for a bit before a cold front started blowing in that afternoon. 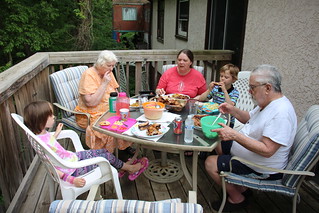 In other news, the rain let up just long enough for us to enjoy the outdoors a bit. I rode my bike for the first time this year, pushing through some gusts of wind for a decent ride (and workout) along the Keystone Trail. I’ve also been enjoying some regular walks during the day, stretching my legs with a walk down to Chick-Fil-A for lunch, just for the heck of it.

We also had another lovely dinner on the deck at Vivian’s parents’ house. Jack and Vivian made smoked some ribs and chicken, and then we Aaron had some fun in the sprinkler and Hannah played with a lawn ornament or two before we headed home.

Next up: Memorial Day weekend! 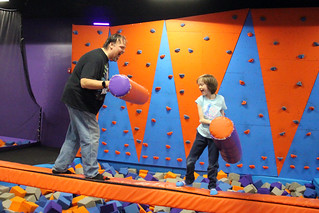 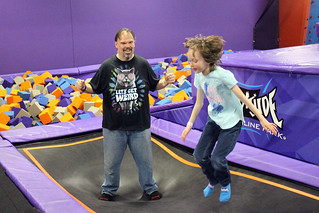 On Friday last week, I joined Vivian and Hannah up at Altitude Trampoline Park for some quality bouncing around time. They have a weekly special for homeschool kids, so Hannah was able to run, slide, and bounce on the various trampolines, climb on a wall, and take a few dives into a pit of foam balls. She even got to have a bit of a sparring match with me on the balance beam. I got her a blue raspberry Icee when we were done, and then we had some lunch down at the Dodge Street Chick-Fil-A — with enough food left over afterward for leftovers on Sunday. (Is that sacrilegious?) 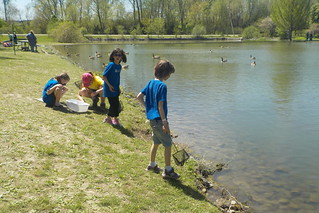 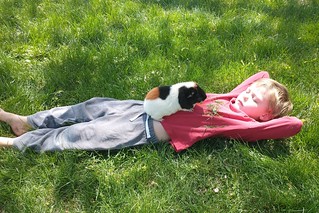 Hannah got to have some more fun with her American Heritage Girls’ troop as they went digging for fossils and fishing for wildlife out at Schramm State Park. She also got to see some bees, pet a sturgeon, and go on a bit of a hike in the warm afternoon.

Aaron and I spent some quality time with Harold in the meantime. Then we took a walk to grandma and grandpa’s house so I could mow their lawn and he could spend an hour or two telling them all about the “maze book” he’d created. Then that evening we got some roasted street corn pizza from Aldi and watched Zootopia for an impromptu Family Movie Night. 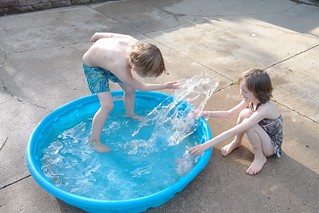 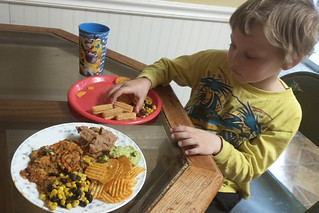 We had some more fun Sunday after church as I got our two Raspberry Pi computers networked together so Hannah and Aaron could have a game of tag in a virtual, blocky world. I got a little yardwork done, and then we broke out the wading pool so the kids could have some fun with our new hose as temperatures pushed into the upper 80s. They took their plush monkeys for a swim as well and had to bundle then up afterward to dry off.

Then on Wednesday, we celebrated Cinco de Mayo with an assortment of tasty food. I got some Mexican coffee and made a breakfast burrito in the morning. Then for dinner, Vivian put together some enchiladas (courtesy of the Stay at Home Chef) with some refried beans, chipotle black beans and corn, “Crispy Taco” potato chips, and homemade guacamole. We even had churros for dessert, which Aaron ate hot out of the oven — with sleeves for potholders. I even made a margarita once the kids went to bed — and I even put salt around the rim. ¡Muy lujoso!