It’s been another busy weekend for me as summer makes way for fall, with plenty of politics involved while still making time for the kids. 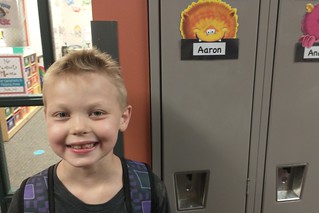 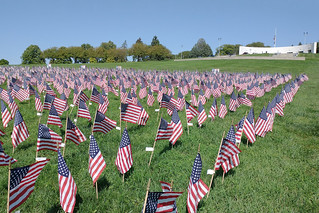 On Monday, there was an open house at Chandler Elementary, so we got to chat with Aaron’s first grade teacher and learn how his first few weeks back at public school have been going. We also got to see his locker, his cubby, and some of the things he’s been working on. We also dropped by the art room, the library, and the gym before playing a bit on the playground before heading home.

Then on Wednesday, I took a lovely bike ride in the cooler weather, stopping my Memorial Park to see their “Tribute of Flags” honoring victims of 9/11 on the south lawn. Afterward, I rode up Happy Hollow to visit a few houses featured in movies I’d seen, including Jack Nicholson’s house in About Schmidt and Martin Landau’s house in Lovely Still. I even dropped by Warren Buffett’s house on the way back to work (it was essentially right on the way). 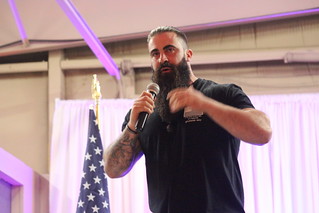 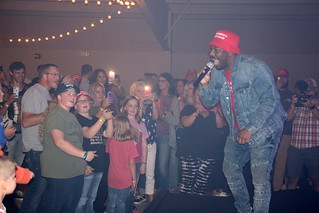 On Friday night, I drove up to Ashland to attend Freedom Fest, a combination of “Woodstock and CPAC” according to organizers. I had a hot dog and some barbecue from a few of the food trucks while chatting with a few attendees in the garden area of the Round the Bend ballroom, where it was held. Kids got to play in a bounce house as grown-ups flung axes while waiting for the program to begin. Chris Baker played emcee, and keynote speakers included school choice advocate Corey DeAngelis, Ben Tapper, and New Jersey gym owner Ian Smith, who made headlines keeping his doors open during Covid lockdowns. Smith encouraged attendees to get involved at the local level rather than waiting for “some guy at the top to solve all our problems.”

The evening ended with a performance by Bryson Gray, a conservative rapper in a floppy MAGA hat and denim and rapping about vaccines and Trump. He seemed to be the favorite of the young folks in the audience. A pastor from South Dakota brought his girls all the way down to see him, and they stood in the front singing right along, clearly familiar with his work. It was a fun night with even more attendees than organizer Tim Davis expected, which was a nice surprise considering Eventbrite cancelled all ticket sales a week earlier. 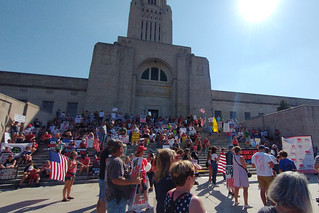 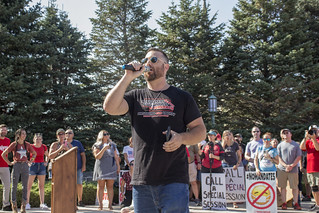 On Saturday, we got up early to take Aaron in his Mega Man outfit for another baseball game, this time with a Halloween theme. He got to throw and bat and high-five the other team members before walking his bucket around to get some candy.

Then that afternoon, I went down to Lincoln for a large Freedom Rally on the capitol steps, featuring several people speaking out against government mask and vaccine mandates and calling for a special session to put a stop to them. There was a fairly good crowd, between 500-1000 people over the two hours I was there, and cars passing by honked and waved. I even managed to find my twin in red, white, and blue as I made my way through the patriotic crowd.

(And of course, no trip to Lincoln would be complete without pho from Pho Nguyenn.) 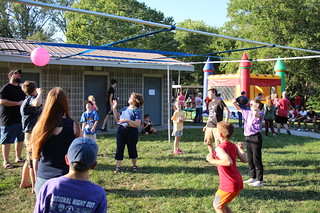 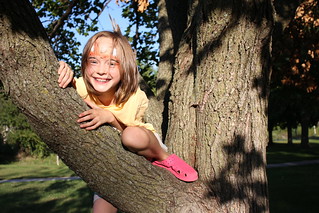 Sunday was a relatively quiet day as I took Hannah to church but Vivian and Aaron stayed home sick. Then that afternoon I dropped by Central Park, where Wildewood was having a “block party” for the neighborhood. Hannah got some time in a bounce house and got her face painted. I had a burger and chatted with Pastor Ron, who just returned from Florida, and a DJ played music as we played some nine-square and cornhole before heading home.

Then that evening, we sat the kids down to watch Star Wars — the original from 1977, unspecialized. It was fun to show them the film for the first time, though I’m not sure how interested they were in seeing it. I was just happy to share another bit of childhood with them (and not in a silly way where Greedo shoots first).