We’ve hit peak fall, with some beautiful fall colors exploding everywhere. It’s also time for parent/teacher conferences, giving Aaron a few days off from school and us a little time for an impromptu trip up to Sioux Falls and back. 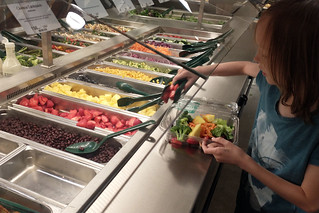 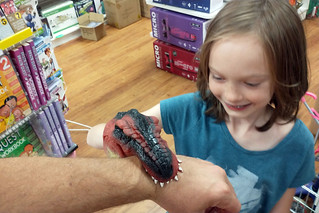 I met up with Vivian and Hannah on the Monday preceding the trip, stopping by Learning Express Toys at Regency Court to play with a few of their toys (just for fun after an orthodontist appointment). Then we took Hannah by Whole Foods for her first salad bar experience, where she assembled a fairly healthful lunch.

We’ve had some nice, brisk weather in the meantime, making for some cold bike rides as I pedaled to work without a car so we could give the CR-V an oil change before the trip. I made a stop by Hanscom Park, where a few flowers are still in bloom as warm weather comes to an end. 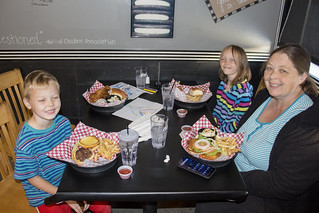 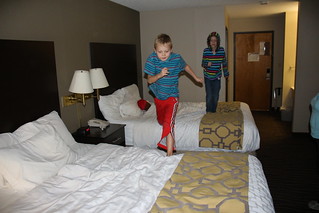 Then on Thursday, we packed up the car and headed on north on I-29. We stopped by Sneaky’s Chicken in Sioux City for dinner, a cozy little diner off Gordon Drive, where we had some broasted chicken and the kids got a bit of a break from the car ride.

We continued on north as the sun set and got checked in to the Wyndham by the airport, where Hannah and Aaron both some a bit of exercise jumping from beds before we crashed for the night. 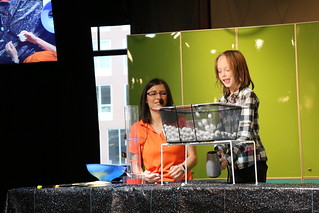 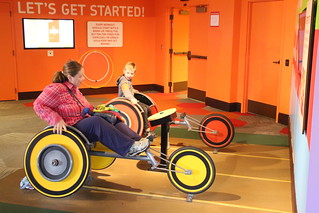 After breakfast at the hotel the next morning, we to spent a rainy morning inside the Washington Pavilion in downtown Sioux Falls, an old high school turned children’s museum. The kids got experience a wind machine and go inside a space suit, and Hannah got to participate in a science demonstration blowing Styrofoam balls into a bucket with a hair dryer.

There were also a couple exhibits on physical fitness as well, giving Hannah the chance to use a stationary bike, Aaron and Vivian the chance to race together, and me the chance to practice my dancing moves. 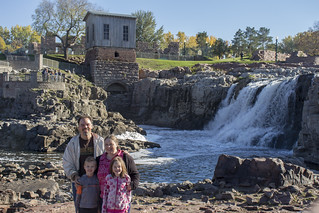 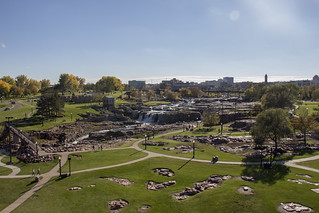 We grabbed some burgers for lunch and then headed down to Falls Park for the afternoon. It’s years since Vivian and I visited the park on our one-year anniversary in 2009, and we had much more time to walk around the rocks snapping photos of the falls with the kids. Hannah got a kick out of the foam down at the water’s edge, and she gave us a bit of a scare when she managed to fall into the water, as the foam concealed a steep drop off. Fortunately, she pulled herself out in a matter of seconds before daddy had to jump in after her.

After getting dried off, we walked with the kids some more, playing on and around some of the statuary. We even took a trip to the top of the gift shop’s observation deck to get a better view of the place. I also got the kids a couple souvenirs from downstairs, including a plush buffalo Hannah immediately named “Buffy.” 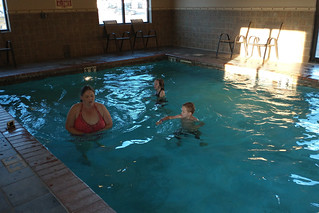 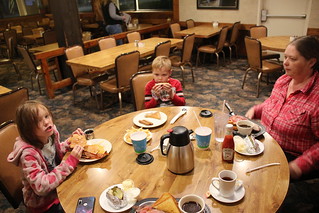 We returned to the hotel for a bit to take advantage of the indoor pool for a bit, getting wet with the kids while working up more of an appetite for dinner.

We headed a mile or two up the road to the Crack’d Pot Restaurant & Bakery on Minnesota Avenue, an old school family-style restaurant with wood paneling I remembered from my childhood in the 80s. The kids got some breakfast for dinner while Vivian and I both got the 12 oz. prime rib special with au jus, having our fill after our long day — even before hitting the soup and salad bar (which we learned afterward came with every meal). 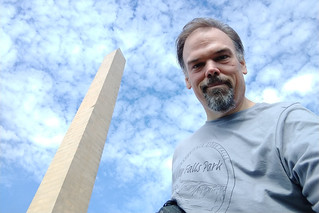 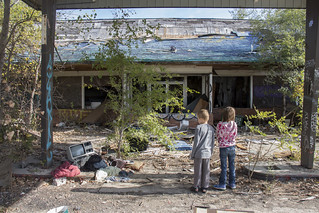 We had breakfast again at the hotel the next day before a long and scenic drive home. We stopped in Sioux City around noon and went by the Sergeant Floyd memorial, which is the burial site of a member of the Lewis and Clark expedition (which you can see prominently from the Interstate).

For lunch, we went to the Tastee Inn & Out, a restaurant I thought was a one-of-a-kind place in Lincoln (and had long since shut down). It’s an old drive-in restaurant with loose meat sandwiches and onion petals — just like I remembered. We took our food down to the Chris Larsen Park and got to walk along the riverfront for a bit, giving Hannah a close-up look and stretching our legs on the playground before hitting the road again.

Then near Little Sioux, we stopped by an old abandoned Citgo gas station I’d seen from the Interstate. It was a creepy place that has been left to deteriorate over a decade or two, and it seemed to serve as the dumping ground for various electronics, such as a microwave, old TVs, and even a TRS-80 (that miraculously was in one piece). 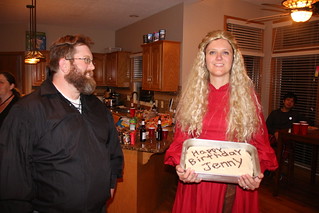 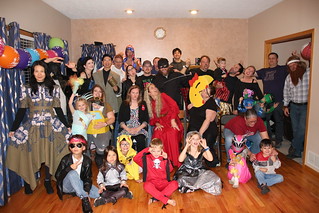 Then that evening, because we just can’t get enough fun, we went to Jenny’s birthday party out in West Omaha. It was an 80s-themed party, so I assembled some Pac-Man and Ms. Pac-Man costumes for Vivian and me, as Hannah and Aaron went as a pink Power Ranger and a Red Ninja, respectively. Our kids had some fun playing in the backyard as Vivian and I caught up with our cluster of mutual friends. Then, of course, I got a group photo of everyone before Kody broke out the cake for Jenny.

It was a long, fun weekend, but we’ve still got more happening soon on our way to Halloween. That’s coming up next.

Video highlights from our trip to Sioux Falls