It’s been a busy week post-blackout having some summer fun with the kids and spending extra time with both sets of grandparents. 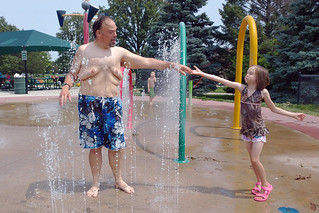 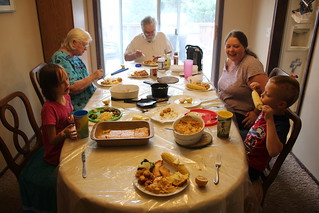 On Tuesday, I pedaled down to Seymour Smith Park to have lunch with Vivian and the kids and get a little wet at the splash pad. We like to visit this little splash pad at least once every summer, and its proximity to the Keystone Trail means it’s just a quick bike ride from my office down to the park. It was a particularly refreshing way for me to spend a lunch break (though it hasn’t helped my farmer’s tan at all).

In the meantime, Jack and Donna remained without power nearly all week, which meant Jack’s been spending the night with us to plug in his oxygen. We also got to help use up some of the thawed food from their freezer. That involves Jack and Vivian frying up tilapia, scallops, shrimp for us to eat. It’s a sacrifice, but I’ll do my part. 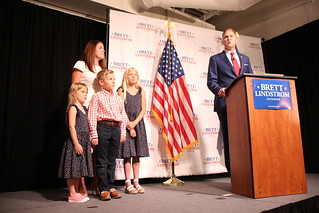 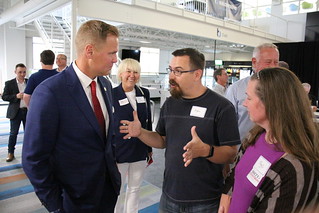 Then on Thursday, with the last election season barely over, we kicked off a new one as State Senator Brett Lindstrom officially announced his bid for governor. I’d bumped into him numerous times recently as the Walk for Life and the Ralston Parade, and several of my mutual Republican friends have already hopped aboard his campaign.

I was able to bring along our friends the Folkens to say hello and ask a few questions of the candidate after his stump speech, and I spent much of the evening snapping photos and rubbing elbows with several members of the Lindstrom family (and the fake news media). One of the nicest things about Nebraska is how easy it is to get close to the folks running for office like this — something I try not to take for granted. 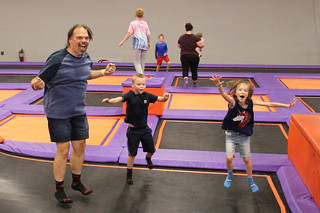 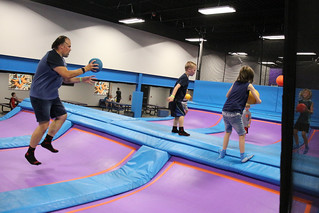 In other news, I’ve been riding my bike every chance I get, going to and from work and getting  to see mist over the prairie grass as the sun rises.

I also got some extra exercise at lunch on Friday when Vivian took the kids to Altitude for some quality time bouncing around together. We even got in a game of dodgeball, which was immensely fun for me, as it was the only sport I like playing back in elementary school and I hadn’t had the chance to play in over a decade. 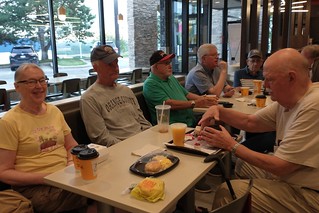 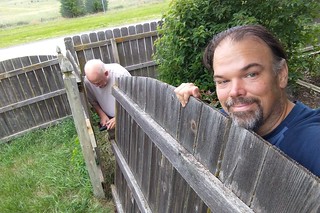 On Saturday, I got to spend a little quality time with my folks in my morning. First, we headed down to McDonald’s for breakfast with a couple of their fellow “seasoned citizens” — a group that’s been meeting for breakfast on Saturdays just as a way of getting out and socializing for a couple decades now.

Then after breakfast, my dad needed an extra pair of hands to help mend a fence, which had come apart in the recent wind storm. It wasn’t broken too badly, but we had to put a few deck screws through a few new boards to attach the fence back to the supporting post. Then I stuck around long enough to help my dad uninstall some Adobe malware on his laptop, AKA Creative Cloud. 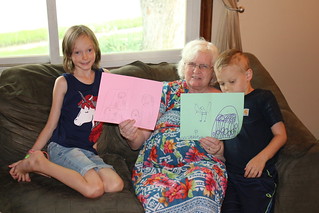 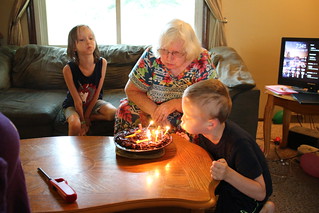 Saturday was also Grammy’s birthday, so much of the day was spent celebrating and keeping our kids occupied (with a board game they created) while Vivian and Jack fried up some calamari steaks for dinner. The kids also made Grammy some handmade cards — as did I, of course — and then we gave Grammy a handful of presents, which included a new ice chest, some habanero-blueberry jelly, and a grown-up coloring book.

Vivian made some Mississippi Mud Pie for dessert, which Hannah and Aaron decorated with a few “worms,” AKA Twizzlers before we blew the candles out. It was a pie with enough sugar to make Hannah go a bit crazy, so I took her for a quick bike ride to my parents’ house and back to work it off before going to bed. 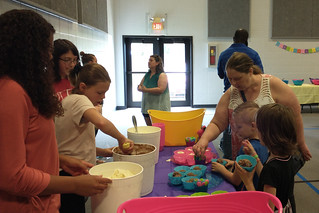 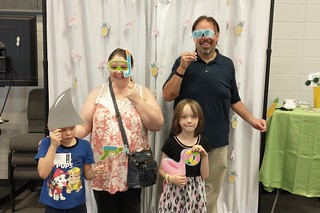 Then on Sunday, I got up early enough for a nice long ride along the full length of the West Papio Trail, all the way from Culver’s in Bellevue to Downtown Milliard. It was a lovely little ride that went past some hidden street art and a large tortoise crawling along. In Millard, I saw the Dairy Queen that was briefly featured in the movie About Schmidt on my way to Millard Avenue and back. I also passed a quaint little bike shop that might be worth visiting should I ever make it back.

Back home, we went to the late service at Wildewood so we could attend their summer social at noon immediately afterward (making time for Hannah to ride her bike and Aaron to have a shadow-fight with me). We had a nice time having “walking tacos” and some ice cream and chatting with a few other parents as our kids bounced around in the bounce house for a bit (and got a family photo).