We’ve been busy weekend here in Omaha having some fun with friends and a few politicians, along with a few rather somber moments over the 9/11 weekend. 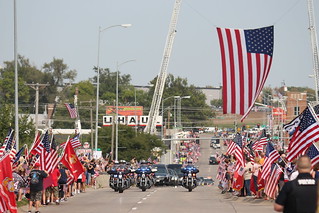 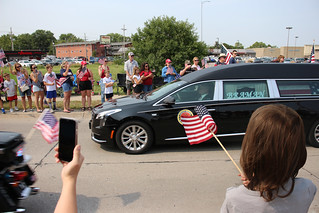 I wound up taking Friday off so Vivian could take Aaron to a doctor’s appointment. After helping Hannah with some of her homeschool work, we drove up to Milliard to help pay tribute to a fallen Marine. If you’ve been following the news, Cpl. Daegan Page was one of thirteen Americans killed in the chaotic aftermath of America’s hasty and sudden retreat in Afghanistan. The news hit home to a lot of people here in the metro area. A few people online organized an event to welcome the fallen Marine home, with thousands of people lining the streets along the route of the funeral procession.

I was able to spot people gathering on the overpasses along I-80 on the way west to Millard. There must have been a couple thousand people just lining Millard Avenue from 132nd to 144th, which was where Hannah and I found ourselves. We came early enough to claim a spot underneath a shady tree, but when the procession finally arrived around 2:30 PM, nearly everyone crossed over to stand along the median as it came by. All you could see from one end of town to the other was a sea of American flags as the motorcycle-led procession came by. A woman next to me burst into sobbing as they drove past. I’m not sure how much of an impact the whole experience had on Hannah, but she held her flag along with everyone else as they came by. It was a rare, unifying moment, and seemed quite appropriate to come before September 11. 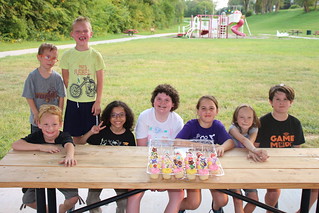 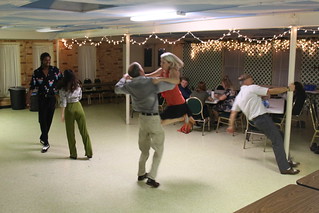 That evening, our whole family drove down to Stonecroft Park to celebrate Sammy and Lily’s birthdays. There was a new “all-access” playground installation Vivian had wanted to see for a while, so the kids had a couple hours to enjoy playing on that. We had Little Caesars for dinner and some cupcakes and the girls got to open a handful of presents before we called it a night.

Then after the kids were in bed, I drove up to the Starlight Chateau for a little swing dancing with few old Jitterbug friends. Jordan was putting on his speakeasy swing dance again, though only a few people showed up to dance. I think we all wore Sara out dancing throughout the night, and Dan got to play from a playlist of goofy novelty songs, including jingles for Coca-Cola, of all things. Mostly, it was nice just to get out and dance once again — something I’ve missed even before Covid came along and ended much of it.

Saturday was a bit of a break as Aaron played baseball, daddy grilled burgers, and we didn’t do much else. 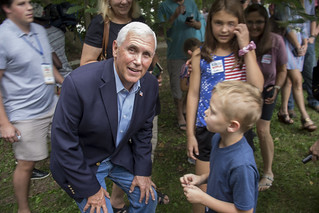 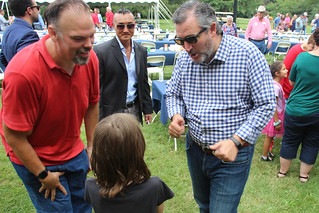 Then came Sunday, which was a long, busy day as we headed down to Nebraska City for a Steak Fry. It was Gov. Ricketts‘ fourth such event, this time with an all-star line-up of speakers: Florida Gov. Ron Desantis, Sen. Ted Cruz, and former VP Mike Pence. The event was nominally to celebrate agriculture, but it was very much a political rally, with each candidate (and Ricketts himself) rumored to have Presidential aspirations.

We also got to see many other familiar faces while we were there, including Lt. Gov. Foley, former Gov. Kay Orr, Sen. Deb Fischer, and Congressman Don Bacon. What really made this event unique, however, was that the VIP speakers were quite accessible to the crowd at large, both before and after their stump speeches. Desantis and Pence literally walked up and started greeting those of us in line for food, making for plenty of selfies and photos all around. Each of them lingered afterward as well, making it fairly easy to simply walk up with either Hannah or Aaron (or Lexi) to say hello. It’s quite a thrill to introduce your kids to a former Veep — or perhaps the next President. 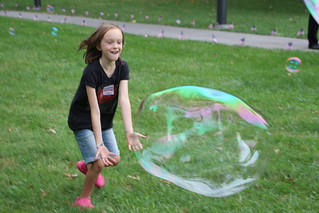 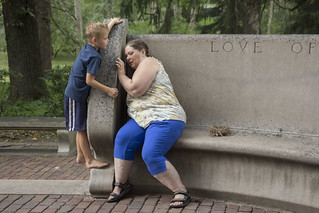 Of course, we also had some fun that had nothing whatsoever to do with politics. A few ladies brought an accoutrement of bubble-making wands, which the kids had fun with for a while before and after the speeches. We stayed afterward to let the kids play on the playground for a while as everyone filed out, and we got to play on the Whispering Bench by J. Morton Sterling’s statue once again (as we did last year). Then we swung by Dairy Queen on the south side of town to get some ice cream cones for the ride home.

It was a long, busy weekend, with fun and excitement and a few somber moments. Mostly, I’m hoping that I’m making some memories with the kids that they’ll have at least until the next election.