We’re still dealing with the aftermath of a record-setting windstorm and blackout that occurred in the early morning hours on Saturday. We were without power at our house for most of the day on Saturday, and Vivian’s parents are still without it yet today (and staying with us in the meantime). Fortunately, we’re all just fine, and our houses and trees were relatively unscathed. 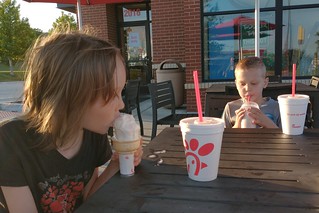 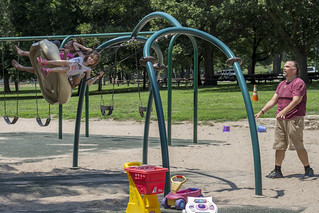 The weather’s been quite lovely, otherwise. On Thursday, I took a nice ride past the Omaha Silos for a few new photos in front of Kent Bellows’ graffiti at the bottom. Then I walked with the kids down to Chick-Fil-A for some ice cream that evening, just to get a few more steps on my FitBit.

The next day, I biked down to Elmwood Park to join Vivian and the kids for lunch, bringing some salads I picked up at Aldi, among other things. We got in a little extra park time now that school’s out for Aaron, much of which I spent pushing the giant disc swing once again. 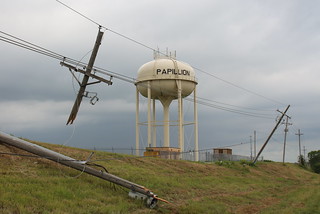 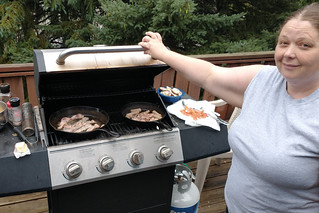 Then, just after midnight, a massive windstorm ripped through Omaha, with wind gusts hitting 96 MPH at the airport, the equivalent of a category 2 hurricane. It toppled tree limbs and power lines all over town, leaving a couple hundred thousand people without power. I checked on our parents and then went by Dunkin Donuts in Papillion (which still had power) to get some coffee and donuts for breakfast.

We enjoyed most of the day off the grid, picking up fallen sticks and branches from our yard and having Hannah do her schoolwork by flashlight. (Hannah also used her own headlight to temporarily replace our light switch in the bathroom.) Aaron and I watched round two of the storm pass by in the garage, and then Vivian use up some eggs and bacon before they went bad to make breakfast for dinner on our gas grill. 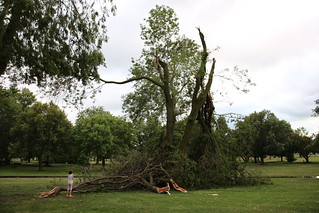 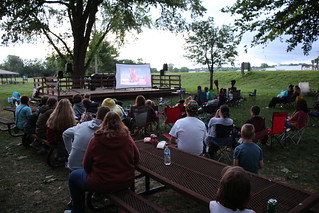 That evening, we took the kids down to Halleck Park, where they got to see some more of the damage up close. They spent some time playing on the playground as the sun went down, and then we walked down to Papillion City Park to catch a bit of Spider-Man: Into the Spider-Verse, presented by “Stronger Families Church.” Our original plan for the evening including a trip to the SumTur, which was cancelled in the wake of the storm. 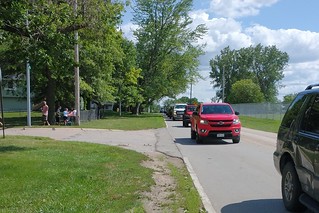 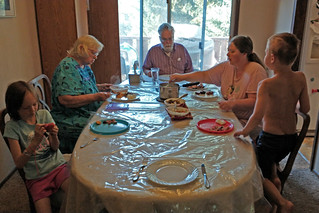 Our power was restored that evening, and we were able to return to some semblance of normalcy on Sunday, which included doing lots of laundry and dishes. The rest of Omaha continued dealing with fallen branches and power outages, with trucks lined up for the tree dump near our house almost non-stop throughout the day. Some neighbor kids had the bright idea to open a lemonade stand right at the end of it.

Vivian’s parents remained without power, so they brought over some thawed food from their freezer and had dinner with us that evening. Then Vivian’s dad, who relies on electricity for his oxygen tank, spent the night in our living room. The next morning, I found the Keystone Trail blocked with giant tree limbs on my bike ride to work commute, so it seems we’ll be dealing with the aftermath of this storm for a while. I’m just grateful we’re all safe and our homes are intact as we’re getting through it.