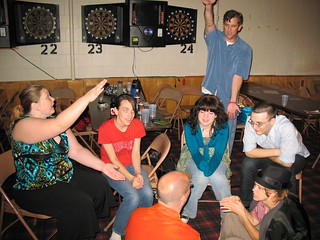 Another year’s gone by, and now I’m even further long into my 30s. I feel like an old married man, a bit too mature this year to dance on a picnic table and sing “Hungry Like the Wolf,” but I had a great weekend with my Jitterbug friends, who always manage to remind me that you’re only as old as you act.

We started the weekend off at JNO, where I got to have a birthday jam for the first time at the Eagle’s Lodge. Last year, JNO was held at Creighton in lieu of a dart tournament, and the year before we had my birthday jam at Bushwackers during the Cowtown Jamborama. Just as many guys and girls wanted to dance with me, and it especially fun dancing with the “other” Matt Johnson. The next day, Vivian treated me to a birthday breakfast of yummy pancakes topped with a matchstick candle for me to blow out. Then she gave me my first present of the day: a beautiful hand-painted wine bottle she’d made herself. We’ve both enjoyed having wine together, but none of the standard-size bottles will fit in our fridge (and white wine taste so wrong at room temperature).

Vivian then took me to see Harry Potter and the Half-Blood Prince that afternoon, which was fortunately still showing at the Village Pointe Theater. By late August, they usually pull all the summer blockbusters out of the theater so they can fill the theaters with the year’s crappiest movies until after Labor Day (I think it’s in the Screen Actors Guild contract). Needless to say, I was quite happy to see they were still showing at least one good film. That night, we had a big pot-luck style birthday bash at our mutual friend Lisa’s House. Both my brothers came from out of town to celebrate with us, which was especially nice. It was the first time the three of us have been together for my birthday in years. Vivian’s mom made me up a guinea pig cake, which was a serious surprise. I had several guinea pigs growing up, but our family hadn’t had one in years, so I was surprised she knew about them. It was a dark chocolate cake, too, which was especially delicious (nobody had the heart to eat the guinea pig).

Afterward, we had some impromptu dancing and card-playing before opening presents. Nathan got me season four of The Office, which was handy because Vivian and I were almost done watching season three. Jonathan gave me some MST3k DVDs and a VHS Tape of Tim Burton’s Ed Wood. I’d actually just suggested seeing this movie with Vivian after watching some Ed Wood commentary from the Angry Video Game Nerd. I also received a custom-made CD of “Johnson” swing tunes from Dan, some sketchbooks from Vivian’s mom and dad, a DVD of old cartoons from Lisa, and a Village in gift card from our friend Sherry and her husband Mike who made it up from Louisville.

Most of us hung around until after midnight, sufficiently stuffed with birthday cheer. The next day was Ben Cass’s birthday. ten years and a day younger than I am, which means it was his twenty-first birthday. Naturally, that meant he had to take him out and get him good and drunk (as a lesson never to do this again). We took him down to Blue Sushi for some Japanese food and fruity martinis. I’ve always found Blue to be heavy of atmosphere and even heavier on price, which was evident when the bill came around.

The next stop on the alcohol express was Upstream where Ben got carded and we all sipped different flavors of beer while trying to play pool together. It was a lovely, birthday-filled weekend to say the least.