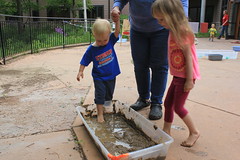 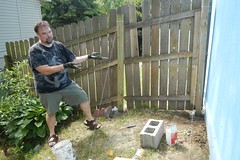 The Johnson Family had some time to play in the dirt over the weekend. On Thursday, Hannah and Aaron got to play with mud down at the Fontenelle Center during Mud Pies. That included making muddy footprints, making paintings with mud, and also having frozen chocolate “mud bars” as a snack. It’s something they do every year for Mud Pies and the first time Aaron’s got to experience it himself.

Then on Saturday morning, dad and I got to do some manly work together as we fixed a couple fence posts in my yard. Spring rains and strong winds pushed our fence over to the point where we needed to re-anchor it with cement. It was a fairly simple job, but required two people to level the posts and tie them down with stakes before I poured cement at the base and cleaned them up with a makeshift trowel (i.e. stir stick). After half an hour or so — huzzah! Good as new. 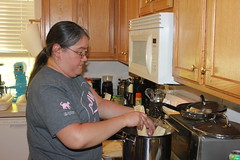 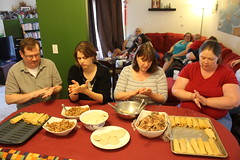 That evening, we celebrated our friend Jen’s birthday party with another culinary experience — making tamales! Phil and Jen both had corn husks, masa (corn meal with lard) and a pair of meat fillings — rabbit and pork — laid out for us to assemble. It was a surprising amount of work to make tamales, and I learned in the process how instead to make pupusas — pancakes made with the masa and meat and fried instead of steamed. We always love going to Phil and Jen’s house since we always learn something new about food when we come over. 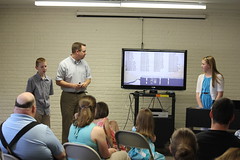 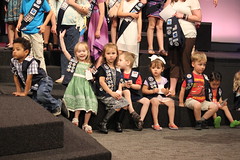 On Sunday afternoon, we took the kids to a piano recital for the Folken kids, who played a few songs for us and also recited a few bible verses from memory. It was a good lesson in getting the kids to sit still before hanging out afterward.

Then that evening we went by the Bellevue Christian Center for a kind of graduation ceremony for the little ones at Rainbows. It went very much like last time with the kids singing a song or two and displaying what they’ve learned this year (and flirting with boys). Hannah got to show us her collection of badges before returning her vest for the summer. Sammy is in her class and had to give Hannah a hug goodbye as she and her family will be sadly moving to Minnesota before long. All four grandparents (and Aaron) were also in attendance, at least until Hannah’s class was finished.