Another fabulous Christmas has come and gone. This year, we got to enjoy a three-day weekend for the holidays, which was particularly nice since we had a whole Monday just to recuperate and clean house after a busy time with the whole family. 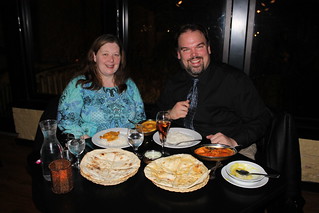 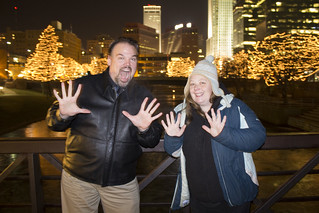 The Christmas weekend started on Friday, with Vivian and me celebrating ten years since our very first date way back in 2006. We managed to squeeze in a movie this time around, ducking into the Aksarben Cinema to see Rogue One before anyone on Facebook could spoil it for us. We went down to the Old Market afterward to get our Christmas fudge from Mike at the Old Market Candy Shoppe, and then we crossed the street to have some Indian food for dinner at Himalayas (located in the Indian Oven’s old spot).

Vivian and I got to reminisce about old times before our traditional walk up and down the Gene Leahy Mall, lit with festive Christmas lights. It was much warmer than usual, with not-quite-freezing temperatures that made it a much more pleasant walk. Several other couples were out at the same time and asked us to get their pictures on the bridge while we were getting our own. We made one last stop by Ted & Wally’s for some date ice cream to celebrate ten first dates together! 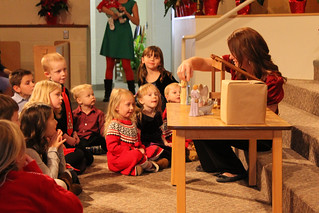 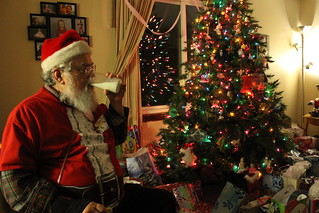 On Christmas Eve Day, we got a little taste of a white Christmas as the world was covered with fog and icy mists throughout the day (what Vivian would call a “California Christmas”). After spending the morning cleaning house and getting food ready for the next day, we dropped by First Presbyterian Church in Bellevue for their Children’s Christmas Eve service at three o’clock. They had some live music and some traditional Christmas songs, as well as a story for the kids abut Mortimer Mouse.

We returned home to put some reindeer food out on the lawn before going inside for Christmas Eve Dinner. Jack and Donna made pork and chestnut stuffing along with some mincemeat pies for dessert. Hannah and Aaron put on their jammies, and I recited I recited T’was the Night Before Christmas before sending them off to bed (dancing sugar plums optional). After that, we — I mean Santa — filled the stockings and laid the presents under the tree. We also opened a few stocking gifts for each other, and Jack hot his milk and cookies before taking the sleigh on home. 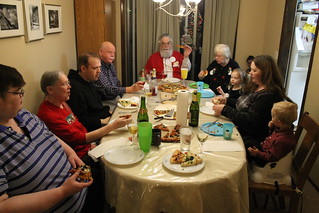 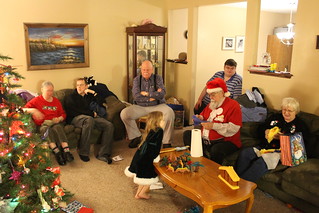 On Christmas Day, we got to have some thundershowers early in the morning as the kids got up to see their presents. We let them open a couple to each other, including a set of matching baby kitties for Hannah to go along with her plush black-and-white cat Zoe. I made some banana and chocolate chip pancakes for breakfast, which we ate before we headed off to church. Yes, I insisted on going to church — it only happens once every seven years.

Back home, I made up our Christmas quiche for lunch before we opened some more presents. Hannah got a new “friend” named Layla, who stayed with us for the rest of the day. Aaron was quite happy with his train set and drum set, and mommy and daddy got a few gifts as well. Grandma and Grandpa Johnson came by later with Uncle Nathan and Jonny to spend the evening with us. We had some Christmas pizza for dinner and opened more presents, some of which were goofy gag gifts from the kids to us. Hannah got a good deal of mileage out of some wind-up Groucho Glasses. Even Santasaurus had a gift before Christmas was done.

It was a busy, busy weekend, and I’m glad we had Monday to recover. Mostly, it was wonderful just to have all our family under one roof again. Merry Christmas, everybody!