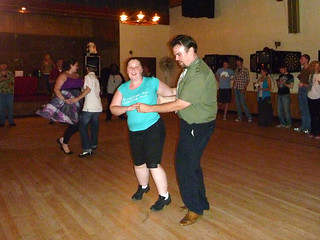 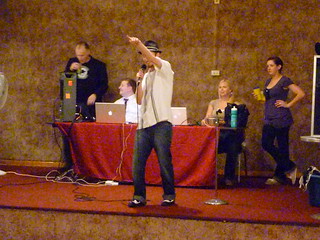 It’s that time of year again. I’m a year older now (the big two-to-the-power-of-five, for the mathematically inclined), and I had a wonderful weekend to celebrate it with both friends and family (thanks primarily to Vivian, who had a weekend full of wonderful surprises in store for me!) We kicked the weekend off, naturally, at the Eagle’s Lodge at 24th and Douglas, mostly for the giant group of birthday jams we held, one of which was mine. I’d had a fairly light dinner and saved my appetite for Village Inn afterward, which proved to be a sleepily goofy night as always. Vivian had kept the details of my birthday weekend something of a surprise, which was just fine by me. We started the afternoon off at Fun Plex, a small amusement park in mid-town Omaha that I was surprised to learn had its own miniature version of Oceans of Fun in the middle of it. I had a great time with Eric, Jon, Jenny, and Kristen and Gabe as we made use of the wave pool, the “lazy” river, and the water slides. The slides were especially fun, both because there was practically no waiting at the top, and because they were significantly faster that the ones available at Oceans of Fun. I found myself flipped around a number of times and went airborne more than once. Of course, I made full use of our waterproof camera, snapping as many photos and video as the battery would allow. After working up an appetite at the water park all afternoon, we went out to dinner at Johnny’s Cafe out in South Omaha. Johnny’s is something of a fixture in old Cow Town, having a long history sitting next to the old stockyards and even being featured in the film About Schmidt. (There’s a big photo of Jack Nicholson in the foyer, just to remind everyone.) We were joined with a dozen of our friends and Vivian’s parents to enjoy some delicious steak and onion rings together before heading home for cake and ice cream. Back at the house, we had some carrot cake and blueberry pie Donna had made with a crust made with vodka to give it an usual texture. We also some scrumptious homemade peanut butter ice cream courtesy of Vivian with a whole buffet of toppings to go along with it. I opened presents and a few cards before gathering with everyone in the basement to watch Mystery Science Theater 3000: the Movie. I’d seen it a couple times before, but it’s always fun to watch again, especially with people who’ve never seen it before. About half the crowd stuck around to watch the “encore” episode of Pod People, courtesy of my brother Jonathan who dropped by to join the party. We stayed up until well after midnight once the movie was done, wrapping up the evening with unspeakable acts of gross with whipped cream (which wasn’t quite as naughty as it sounds). On Sunday (my birthday), I went to Lincoln and dropped by Northpointe Community Church, my old place of worship several years ago. They had a new building out in Northwest Lincoln, and I was glad to be able to visit it. There were only a handful of people I recognized from the old days, but it was good to say hello and catch up with them before heading out. We spent the afternoon with Nathan and Ranae, who gave me a copy of Robert Crumb’s Book of Genesis. It proved to be a very unusual graphic novel, and considering the explicit nature of most of Crumb’s works, I was quite surprised to see that he’d illustrated the first book of the bible entirely “straight.” It should prove to be a very interesting read (even more so than Fritz the Cat). The five of us went to lunch at the Engine House Cafe in Havelock, one of my favorite little restaurants, and then went to the 20 Grand to watch Vampires Suck. I probably wouldn’t have picked that movie on my own, but it turned out to be much funnier than I expected (probably because I’ve sat through all three of the Twilight films so far and could appreciate all the gags). We played a few video games in the lobby before heading home, and then I got to wrap up the day opening a few more presents. I got copies of Ayn Rand’s Atlas Shrugged, Sun Tzu’s Art of War, and Seth Godin’s Linchpin courtesy of my parents, an iTunes Gift Card and an audio book of Ben Stein’s How to Ruin Your Life courtesy of Jonathan (among other things I’ll have to share later), and a bottle of Glenlivet and an AC/DC adapter from Vivian. Needless to say, I was quite the happy birthday boy. It was one of the best birthdays I’ve ever had, certainly the best in recent memory, and I had a wonderful time with the dozens of wonderful friends and family who came to share the weekend with us. I feel blessed every day I’m with Vivian, but this weekend made me feel more blessed that I could imagine. I love you, sweetie! You’ve made me very happy to have been born.