Summer’s now on a downward slope, with a week of muggy hotness and scattered days of showers, with time for some house painting, VBS, and a few visits from politicians in-between. 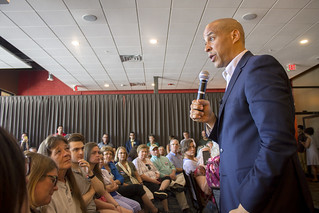 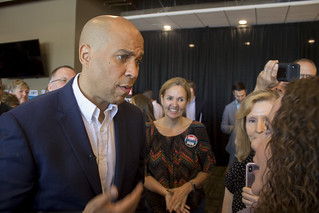 On Friday, it was Cory Booker who dropped by. About a hundred people came to the Gathering Room to see the New Jersey Senator and Presidential Candidate (polling around 1.5% nationally). He was introduced by three local Democrats and then gave a brief stump speech focused on “values” rather than “policy.” He had a great deal of enthusiasm and energy, which made for more interesting photos than most other candidates I’ve photographed. He also seemed to enjoy making a number of “dad jokes,” asking me personally during the Q&A if I were walked on as a child since my name was “Matt.”

My question was a bit more seriously, as I briefly relayed the assault of journalist Andy Ngo by Antifa in Portland and asked Sen. Booker if he would condemn them for it. You can read a partial transcript of his answer here, but he essentially condemned the violence but not the group itself, saying he wasn’t familiar with the situation. I thanked him afterward (during selfie time) for the question and said that the sides these days are not so much right and left but fringe versus mainstream, and we all should be OK with calling out the fringe, no matter which side they think they’re on. 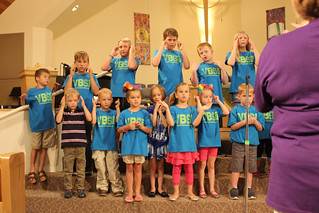 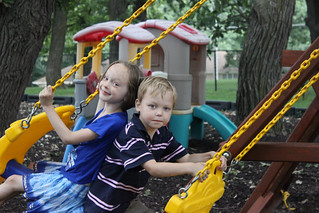 In the meantime, our kids were having a week of VBS at First Presbyterian Church in Bellevue, learning about Jesus healing lepers, washing feet, and being a servant in many other ways. We went to the church for service on Sunday so they kids could stand up front and (almost) sing a song or two from their week with their little friends. Our friends the Mills were there as well, and we stuck around afterward for fried chicken and some playground time before dragging the kids home. 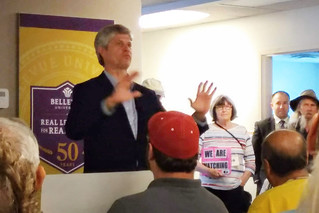 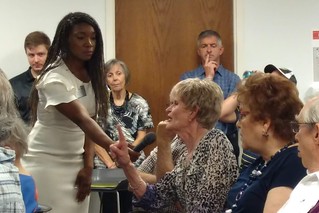 Then on Wednesday night, I dropped by a town hall with Jeff Fortenberry, who actually represents my district here in Nebraska. It was a packed house, and as usual the crowd seemed to be peppers with members of the opposite party. Things stayed mostly cordial, though one lady seemed to want to talk over everyone else during their questions before being told my another audience member, “We came to talk to him, not you.” Another woman wanted to argue with Fortenberry over the words “climate change” and seemed uninterested in his actual proposals on green energy and reducing carbon emissions, and another wanted him to condemn President Trump’s tweets (which he did).

A few more people had more serious questions, such as a woman whose parents died of carbon monoxide after their car, which had a key-less ignition, was accidentally left running. There was also a blind veteran who talked about the difficulty deaf veterans have getting help at VA hospitals when nursing staff have to deal with calling “711” and TTY machines. It was a good exchange overall, and it was especially nice to be able to have a back-and-forth with someone who will actually be on my ballot next year.