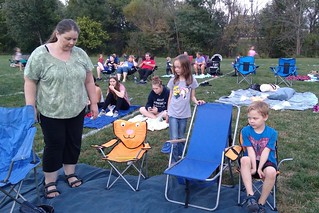 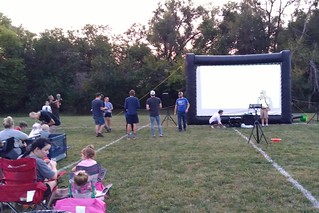 Fall seems to be here at last, but we still managed to find another outdoor movie to watch as a family before the really cold weather starts setting in. On Friday, Brookside Church out in Millard showed Pixar’s “Up” to us and around a hundred other people on their lawn. They even had a snack bar and a few goofy games that involved hitting balloons and eating hot dogs before the movie started. Most fun of all, however, was watching Hannah and Aaron see the movie for the first time — Aaron in particular finding scenes with the dogs hilarious. Vivian and I had seen the film about a decade earlier, and I was surprised how much more I enjoyed it the second time around. 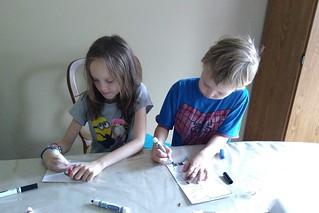 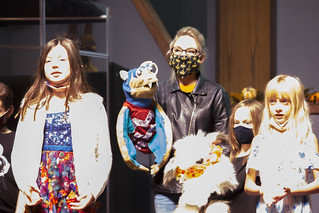 Saturday was a little quite, as Vivian and her mom shopped at the Bellevue farmers’ market and I worked with the kids to surreptitiously make their mom some Happy Birthday cards and then shop for a few presents for her.

Then on Sunday, I got up early to make some coconut toast for a birthday breakfast for Vivian and the kids. We went to church together afterward, where a bunch of the kids from Sunday School — including Hannah — went to the front of the church to sing “He’s got the whole world in his hands” with various puppets and instruments. It was very cute, and Hannah even got her own puppetry certificate afterward. 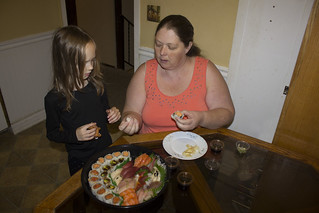 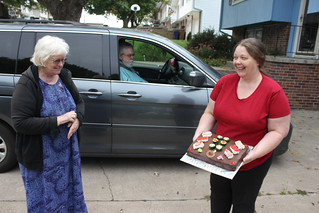 We continued celebrating Vivian’s birthday with a big sushi & sashimi lunch together, courtesy of Miyake Sushi in Papillion. Then by some coincidence, Jack and Donna came by a little later with a Sushi Birthday Cake for Vivian, decorated with various forms of sushi on top of a moist chocolate cake, along with a few presents, which Vivian opened on our driveway.

We had planned to have a big birthday dinner with Jack and Donna to celebrate Vivian’s birthday, but since they wanted to eat al fresco, we decided to put it off to another day when the ground wasn’t quite so damp. So instead, we took a joyride down to Lake Manawa, enjoying cool air with the windows open and chasing some seagulls around the lake — which Vivian seemed to find amazing so far from any ocean. 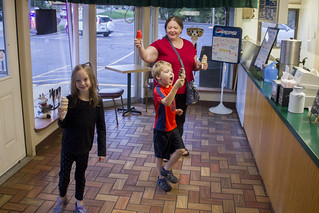 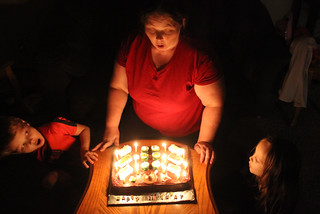 After our ride, we had dinner at what’s quickly becoming our go-to restaurant for birthdays and anniversaries — Dairy Twist. Vivian had a craving for a cheesesteak sandwich, and we got some chicken strips for the kids — along with some ice cream afterward, of course.

Then back home, I lit up Vivian’s birthday cake with candles to blow out, followed by cards and presents with the kids. Hannah and Aaron were particularly proud of their little cards, which included pictures of sushi, Mega Man, and a cake with exactly 41 candles on it. 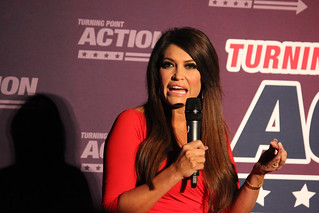 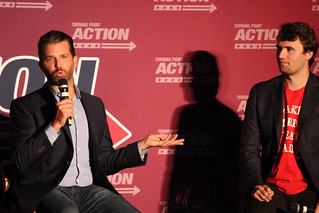 On Monday (in-between birthdays), Turning Point USA founder Charlie Kirk brought the Four More Tour to Omaha, which included guests Donald Trump Jr. and Kimberly Guilfoyle (and Students for Trump founder Ryan Fournier). The event was held at the “A View on State” reception hall in northwest Omaha, and the trio spoke to a packed house of around 500. I saw many familiar faces, including Mike Foley, Derek Oden (giving Hal Daub an elbow bump), and of course David and Mason Halliburton, who were able to snag a selfie with Guilfoyle before she left.

The rally itself felt like a biting, sarcastic comedy show, with jokes all targeting the Bidens — Joe for running a campaign in which he seems perpetually absent, and Hunter, who we learned took $3.5 million from the Russians in the wake of the Trumps being investigated for Russian collusion. Emcee Charlie Kirk brought Congressman Don Bacon on stage toward the end of the show to say a few words encouraging everyone to help get out the vote, as Nebraska’s 2nd district has become a “battleground” both for its electoral vote and congressional seat. Kirk then stayed to meet and greet nearly everyone who wanted to say hello (which included me, of course), and I even managed to nab an autographed copy of Don Jr.’s new book, Liberal Privilege, on my way out the door. 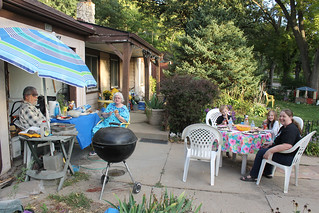 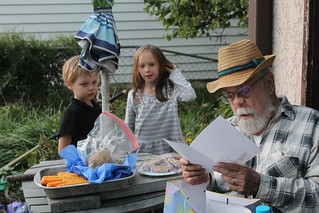 Then Tuesday evening, we celebrated Pop-Pop’s birthday by dining al fresco on his driveway. I swung by Outback Steakhouse for some bloomin’ onions for an appetizer, which we ate outside before getting dinner underway. The kids played nicely with magnetic blocks while Vivian and her dad grilled some rib-eye steaks in a dramatic flambé. We had some burgers separate for the kids (and Donna). We had a handful of presents for Jack as well, including homemade cookies from the kids, grilling trays, tongs, and some Jack Steak barbecue sauce of all things. Then for dessert, we brought out a delicious Italian layer cake that Vivian had made up, putting a lone candle on top for Jack to blow out before diving in.

It was the perfect evening for a birthday dinner outdoors. Hopefully the nice weather will persist through the week, or at least while we head off to Vala’s on Thursday.