We just got finished with a fun, filling, and frankly exhausting Thanksgiving Day Weekend, where every one of our four days “off” was filled with activity. 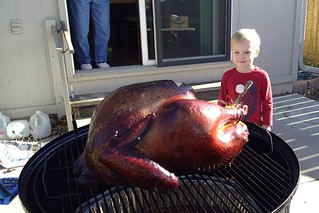 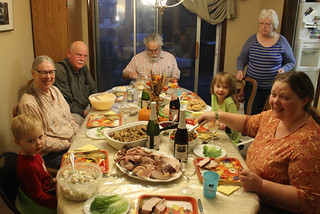 Thursday was a remarkably warm Thanksgiving Day, so once the Macy’s parade was done, I decided to take the kids for a walk to my parents’ house. Hannah got to try “walking” her new kitty and grandpa got to show us the giant turkey was was busy smoking in the backyard.

All four grandparents eventually joined us for another Thanksgiving Meal under one roof. Dad carved the turkey, and we had a huge assortment of stuffing, potatoes, salad, fruit salad, Jell-O salad and other standard Thanksgiving foods on the side. We even had festive plates (which were easy to clean up) and a lovely centerpiece featuring pumpkins from Vala’s. Top that off with lemon meringue and pumpkin pie and we called it another delicious Thanksgiving for the record books. 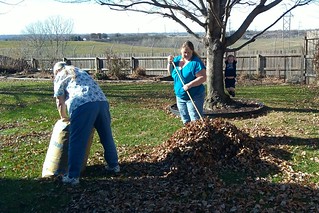 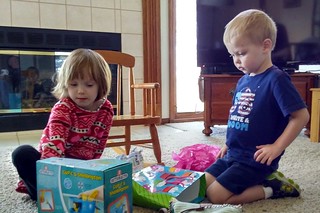 The lovely weather continued on Black Friday, so we took the kids for a walk back to my parents’ house to play a bit in the leaves (and help rake them). Grandpa also told Hannah a story about Tomtens, and Aaron got to try extending his train tracks into the living room. We ate the rest of Hannah’s birthday cake together, and then Hannah got to open a couple late birthday presents for grandma and grandpa and Uncle Jonny — her very first purse and a set of Octonaut Toys, respectively. 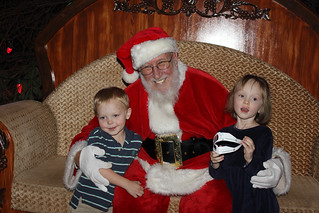 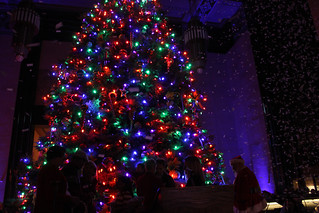 Then that evening, we went down to Union Station for their annual Christmas Tree Lighting. Grammy and her crew were decorating cookies as usual, so Hannah and Aaron got to get sugared up a bit before making a tea light snowman and then exploring the museum a bit. Santa was on hand for pictures and lap-sitting, of course, so we took Hannah and Aaron to see St. Nick while the line wasn’t too long. Then we took them downstairs for their annual run through the trains downstairs. We also got to look at a handful of “ethnic” Christmas trees upstairs, all decorated with ornaments relating to various cultures and countries around the world.

As seven o’clock approached, a high school show choir sang some festive Christmas songs before Mayor Jean, David Mangelsen, and Santa got up to light up this year’s tree. It was topped with a “150” star to commemorate Nebraska’s sesquicentennial, and everyone got to wear special glasses that turned the glare from the lights into tiny candy canes, Santa heads, or elves. We stuck around long enough to play in the confetti a bit and get a few nice pictures in front of the tree, but we eventually made our way back home, thoroughly exhausted. 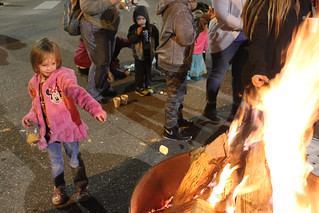 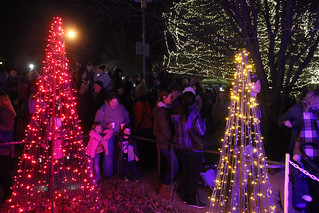 The next day, I did a little bit of work on the deck with my dad as the weather was still lovely. Then we took the kids to downtown Papillion to see their “winter wonderland” when the sun went down. They had bonfires with free hot chocolate and s’mores for the kids. There was some live music outside the library after they turned on the Christmas lights on the north lawn. We also got to see a pair of reindeer that were on-hand just for picture-taking (as were a couple Christmas trees).

We dropped by the Papillion Eagle’s Lodge to see Ariel before making our way to the firehouse for cupcakes and cannolis. Then we wrapped things up walking through some more lights and an 1860s farmhouse on our way back to the car. It was a lovely evening, but a little crowded and chaotic as we tried to see everything in the space of a few city blocks (wiping us all out again). 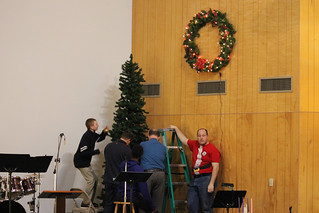 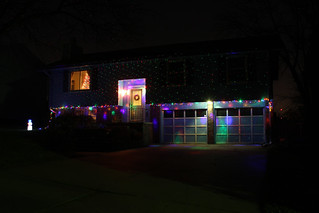 Then on Sunday, we spent a couple hours having a soup potluck at church and then helping to decorate for Christmas. Vivian made a tasty baked potato soup that nearly put me to sleep before hanging garland on both ends of the sanctuary. The Papsons also got to be a Living Nativity for a few minutes by putting Simon in the manger up front.

Then that afternoon, I continued the Christmas decorating at our own house. I’d put up the lights last week, and now we hauled up the tree and put the snowman out front. We also positioned the laser display Vivian got for Christmas last year to give our house a little sparkly goodness. Most importantly, of course, was that Santasaurus came out of his box, officially ringing in the Christmas season for 2017.

It was a fun, albeit exhausting weekend, and we spent a little time recovering digging into some classic Christmas movies, courtesy of our local library.