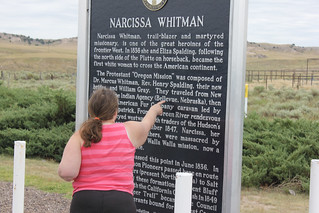 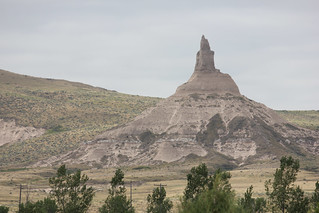 The next day took us down Highway 26 and along some scenic rocks and vistas, including Courthouse Rock and Jail Rock, as well as iconic Chimney Rock. We also came across a historical marker for Mormon pioneer and martyr Narcissa Whitman, whose journey west started in Bellevue of all places. We made a quick stop in Oshkosh for some Krispy Krunchy Chicken (and a bathroom break) and nabbed pictures of an abandoned but colorful old motel along the way. 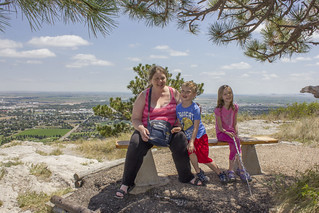 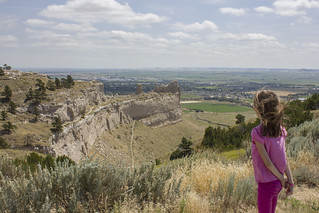 Before long, we made it to the Scotts Bluff National Monument, a giant (and gradually deteriorating) bluffs in the panhandle that Vivian and I had visited once before but didn’t know we could go to the top of. It was quick drive through a few tunnels around the side to get to the summit, and then we had a few paths to walk around to see spectacular views overlooking miles and miles of the world below (far enough to see Chimney Rock from over 26 miles away).

The steep drop-offs and signs warning about falling made it a little nerve-wracking walking with the kids, but they stuck close along the path, venturing only far enough to snap photos of the views and some wild cacti growing along the path. We also got to see a plaque for the “Scott” the whole area is named after, among other things before our trip back down. 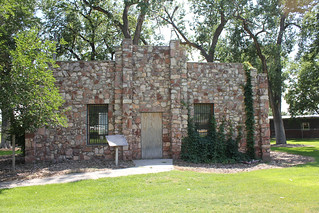 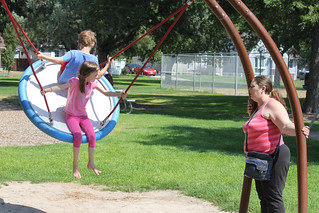 We made a trip next to Scottsbluff (the town), where we got some Mexican food for lunch at a place called San Pedro and let the kids play a bit at Pioneer Park around the corner. This park had a few interesting features along with the playground. One was a stone structure that was apparently built rock-by-rock by a Mexican farm worker who carried the rocks himself during his daily 20-mile walk to work, hoping to use it as a kind of proof-of-concept piece / resume to get into stone masonry. There was also replica of the Statue of Liberty, erected by a troop of Boy Scouts back in 1950.

During our brief picnic, I got to meet up with fellow web comic artist and historian Mat Rhys, who told us about these and other stories, including folks from Alliance literally stealing a building from Hemingford they hoped to use to win them role of County Seat of Box Butte County, and settlers from Gering moving their entire houses to Scottsbluff when they got tired of waiting for the railroad line to make it to their town. 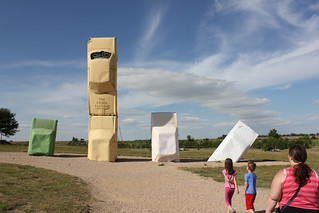 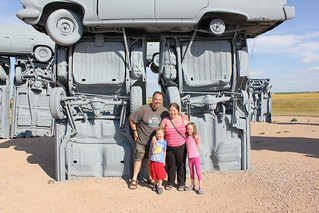 We made a stop at Carhenge on our trip north of Chadron, spending an hour with the kids at one of the panhandle’s best-known, albeit bizarre attractions. The kids got a good, close-up look at the various cars strewn about in the form of Britain’s famous rock structure, and there was even one car off to the side that we were allowed to “auto-graph” before we left. A few of the cars seemed to be memorials as well, one for WWII veterans and another for the domestic auto industry.

We headed on through the Nebraska national forest, giving us a brief change of scenery and a glimpse of what was in store in the black hills as wide-open prairie gave way to a few rolling hills of trees on our way to Chadron. Then we had a quiet evening of pizza and TV shows (via tablet) before one more night of sleeping in beds (and jumping on them) before a few days of camping.