President Trump returned on Omaha on Tuesday this week for a campaign rally down at Eppley Airfield in a series of last-minute events in an increasingly tightening Presidential campaign. The rally apparently trended on Twitter yesterday, and not for any of the reasons I would have guessed. More on that at the end. 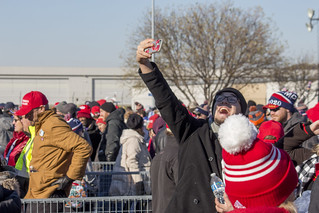 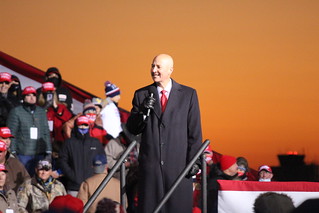 I brought my friend Jake along again for the rally, warning him ahead of time about the expected crowd (25,000 according to the Omaha Police Department) and hours of standing in line. We got there early at 2:30 PM hoping to beat most of the crowd. We immediately got on a shuttle bus that took us to the rally site, where trump staff took everyone’s temperature coming into the rally and had free masks, hand sanitizer, bottled water, and hand warmers for everyone. There was a respectable crowd in line already when I arrived, some having brought chairs, coolers, and even heaters like one big tailgate party. I saw some familiar faces while waiting to get inside, and I enjoy chatting with some of the die-hard Trump fans, one of whom wore a blanket with a photo of Trump they’d personally taken at the White House.

The crowd continued to pour in until OPD eventually shut off traffic around 6 PM — with thousands more still arriving. A series of local candidates and politicians got to up to speak before the President arrived, including David Young, Don Bacon, Kristi Noem, Deb Fischer, Gov. Ricketts and his brother Todd. Finally Rick Holdcroft, running to represent my state district, gave an opening prayer before the National Anthem. 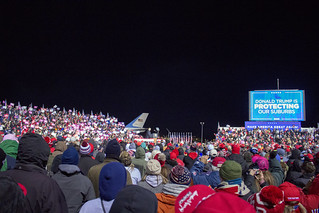 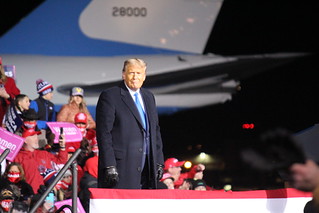 There was a bit of a lull after the speakers concluded. A couple staff members threw hats to the audience and other waiting in long, long lines for food vendors and free hot chocolate int he warming tent. Then around 7:45 PM, we saw the lights of Air Force One descending onto the runway, with plenty of cheers as it taxied along the tarmac behind the bleachers. President Trump emerged a few minutes later to the tune of Proud to be an American and took the stage. He made a few quips about the cold as he launched into his stump speech. This was his third rally of the day, but he had plenty of energy, taking shots at Biden (Joe and Hunter), particularly recent scandal involving Hunter’s laptop.Trump also had a few videos that played overhead, highlighting civil unrest among other things.

The crowd was very responsive, particularly when Trump pointed out various Nebraska politicians in the audience. The crowd started chanting “Bacon! Bacon!” when he pointed out the 2nd District congressman, and Trump took a brief shot at Ben Sasse, commenting that Deb Fischer was his “favorite Senator from Nebraska.” Then he wrapped up shortly before 9 PM, telling the crowd “we will make America great again” before dancing to YMCA by the Village People, which blasted overhead as people began to make their way out. 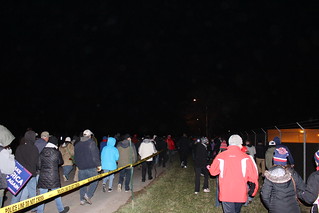 The long walk back.

As you may have heard, getting out of the rally proved to be a bit of an adventure, but the media has blown it way out of proportion. Jake and I followed the crowd out of the rally fairly quickly, hoping to get an early spot on a bus to get back to the parking lot. The buses hadn’t arrived yet, however, and the majority of the crowd seemed to just want to keep on walking down the road on foot. I didn’t quite realize they weren’t just walking to a bus stop but were actually walking the entire way back to the parking lots — a trek of over 3.5 miles.

It took Jake and me around an hour and a half to walk the entire way, at which point we were quite sore and tired and ready to collapse. Adding insult to injury, the first fleet of buses passed us along the way, making me wish we’d just waited a while at the curb for them to arrive. We had about half an hour after that to squeeze out of the south parking lot before we could finally head home.

The story didn’t seem to end there, however. The news media picked up the story, and declared that Trump supporters were “left stranded in freezing temperatures” after the rally, which was ridiculous. Only those of us dumb enough to walk back (raising my hand here) were left in the cold. Some folks discovered partway that they couldn’t make the trip and needed medical attention, some of which included blisters or cuts on feet from all the walking. What the media aren’t pointing out is that the crowd was far, far larger than expected — and may very well be a leading indicator for the election next week. We shall see.

Jake was a real trooper through the whole experience, and he even said he’d do it again if he had the chance. In particular he liked bragging to his dad that he got to see Kristi Noem, who they missed at the Governor’s steak fry a month ago.