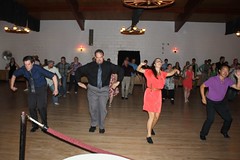 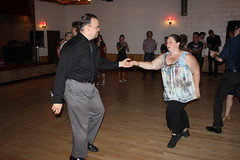 Time has been flying by these days. Can you believe Hannah is already in pre-school? Then over the weekend, I turned 37, and I’m getting so old that I’m starting to lose track of how old I actually am. Of course, I’m not too old to stop by the Eagles’ Lodge for a birthday jam at Jitterbugs Night Out. Vivian and I watched the movie War Room with Vivian on Friday (the latest film from the Kendrick Brothers, who also made Facing the Giants, Fireproof, and Courageous) and then spent the evening swing dancing until after eleven. There was a decent-sized crowd at the Eagles’ Lodge, but not as many familiar faces as I’d expected. There were plenty of newcomers to dance with, and they weren’t all just college students who’d wandered in from Creighton University. No, they were fairly experienced, which suggested to me that a new generation of young dancers had moved in while Vivian and I had been away.

I still got in plenty of dancing, thanks partly to a fairly decent playlist. I’m so grateful we’ve moved on from having nothing but Dixieland Tubas and Gypsy Jazz filling every dance slot. 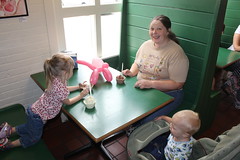 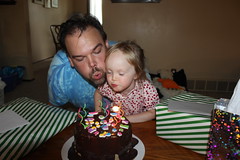 On Saturday — my birthday — my parents took me out to breakfast as Hannah and Aaron played cowboy and cowgirl back at home. Then I went down to the Old Market to browse through the Farmers’ Market and get Hannah a pink kitty balloon, and then we stopped to get me some free birthday ice cream over at Ted & Wally’s.

Jack and Donna dropped by a little later with a massive chocolate mocha layer cake. Hannah helped me blow out the candles, and I got to open a couple presents: a pair of saddlebags for my bike, which would make it easy to bike to work with my breakfast, lunch, and a change of clothes, and a lovely pair of New Balance shoes. 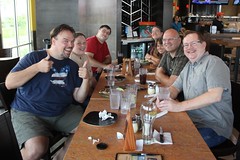 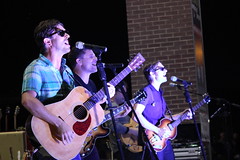 My birthday cake was so ridiculously rich that I almost didn’t have room for dinner at Spin afterward. Our mutual friends Phil and Jen had introduced us to the Neapolitan pizza joint back during Shakespeare on the Green, so I dropped in to try a combination chicken pesto / primavera pizza with Vivian. (I also managed to get 20% off since it was my birthday.) Our friends Phil, Jen, Jon, Jessica, Mark, Libby, and Ole all stopped by to pay their respects (and have pizza).

After dinner, Jon joined Vivian and me down at Stinson Park to spend an evening with Yesterday and Today, a Beatles tribute band. I haven’t actually been a huge fan of the fab four before, but I was aware of their existence and thought it sounded like fun. I think I left with a better appreciation of the band’s full catalog of songs, as they went through everything from the early 60s rock of I Want to Hold Your Hand to the groovy eastern sitar plucking in Norwegian Wood. They even played the “Birthday” song, which I’d never even heard before.

The concert also seemed to attract a giant swarm of bugs, who mostly pestered the band underneath the blazing lights on stage. It was a great birthday nonetheless, and I found myself enjoying the concert all the more thanks to some baby boomers in the audience participating in waving cell phones (and at least one lighter). Our Jitterbug friend Takashi also managed to work his way to the front of the stage to get a good face-full of the concert before the band called it a night.