Vivian and I enjoyed a wonderful (and long) Labor Day weekend in Cedar Rapids surrounded by my extended family celebrating my Uncle Ben and Aunt Carol’s 50th wedding anniversary. It’s been several years since I’ve seen most of the people, and it was great to spend time with them again and introduce them to our little ones. 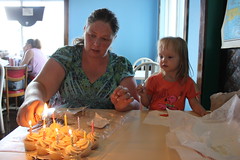 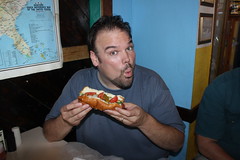 We started the weekend off with a little birthday celebration at the Flying Wienie, since my birthday happens to fall on my Aunt and Uncle’s anniversary. We’ve passed by this little place every time we went to Valley View for church on Sundays in Cedar Rapids, but it took us years to finally visit when they were open. I got a Chicago-style hot dog and some homemade fries, and Vivian even brought some little birthday cupcakes that she dressed up with candles for me to blow out. It was a nice little way to start the weekend, and I even got to show Hannah an upright video arcade game for the very first time. 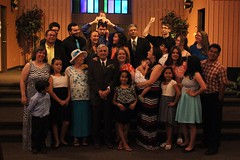 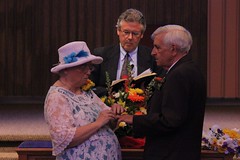 That evening, we gathered at Edgewood Baptist Family Fellowship Church to see Ben and Carol renew their vows, the same church they were married in 50 years ago. Caleb and his fiancee Lacie sang for them, and then Ben and Carol said their vows and exchanged rings (again). A whole cluster of family members from the Geho clan and my mom’s side of the family were on hand. A bunch of them had grown up quite a bit during the past six years, and several others now had kids of their own. Hannah seemed right at home running around in the midst of all of them, and we had more than a handful of people willing to hold Aaron for us throughout the night. 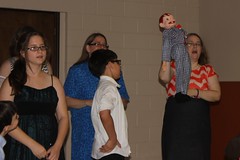 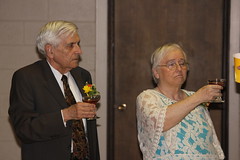 The party moved along downstairs, where Arlan introduced Ben and Carol along with all their kids before the food was served. The Geho girls and their gaggle of kids sang a few songs in honor of the happy couple, and of course there was also the Cutting of the Cake™ and a few toasts to top off the evening. Mostly, it was fun catching up with all our family members after so many years apart. Caleb and Lacie handed out wedding invitations in person to save postage, and he wished my brothers had come along so they could play “DAK” one more time before tying the knot. 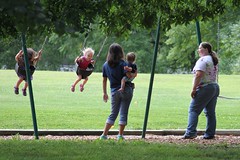 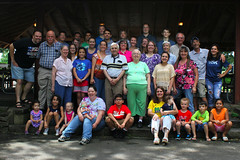 The next day (after a brief workout at the hotel) we went down to Ellis Park for a long picnic lunch with the family. Arlan and a bunch of the Uncles gathered around the grill, and Hannah got to play with a few of her cousins over on the playground. It was so nice to let her run loose for a few hours with so many family members available to keep track of her, and Aaron got passed along from one family member to the next throughout the afternoon. I couldn’t let the opportunity for a giant group picture to pass us by, either, so everyone gathered on the steps in front of my makeshift tripod, and I was able to snap the whole group in a photo worthy of framing (despite one person’s determination to hide his head the entire time). 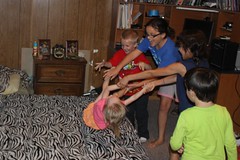 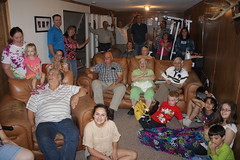 That evening, we drove down to Arlan and Barb’s place to have some apple crisp and watch a couple home movies I’d burned to DVD as a gift for Ben and Carol. My dad and I have been recording family get-togethers like this for as long as I can remember, so I gathered as many clips as I could that featured Ben and Carol and put them all into a half hour compilation. That meant everyone had to cram together in the basement, making for more fun group photos. Hannah also got to spend more time getting thrown around by her cousins as Vivian and I got to have an extended conversation with Abby and Shannon about the differences between our generations. (“Roseanne Barr? Is that like a bar with drinks?”) 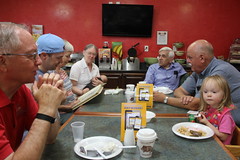 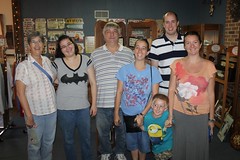 We weren’t quite done with our family by the next day, either. We got up and had a long breakfast with Ben and the Lockridges at the hotel, checking out photos from the wedding fifty years ago over biscuits and gravy. Then Vivian and I took off to visit the Amana Colonies on the way home, and we managed to bump into the Gibbs. They had come to visit with my mom’s next-door neighbor Pam for lunch (and more gratuitous pictures, of course). Then we bumped into Vivian’s former co-worker Cynthia, proving again what a small world this is. When we weren’t running into old friends and family members, Vivian and I walked around the lovely old streets of Amana buying some wine, cheese, and sausage, and we let Hannah run a bit wild in the candy store picking out something sweet while Aaron got a bottle. 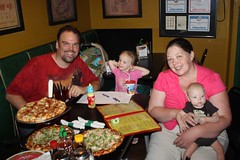 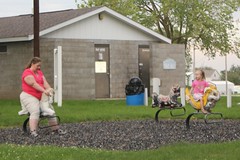 The fun trip wasn’t over then, either. On the way home, we dropped in at Fong’s Pizza in Des Moines, which was highly recommended to us by the culinarily-savvy Phil and Jen. They had pizzas done in the style of classic Chinese dishes — Kung Pao Chicken, Happy Family, and even Crab Rangoon. It required an open mind, since none of them has tomato sauce (or tasted all that much like pizza), but they were all very good. A heavy thunderstorm started rolling in on the way back to Omaha, which gave us a nice light-show and some rain, but fortunately not much else. We did have time to stop by Adair to see everyone’s favorite smiley face water tower and get some quality play time in the park before calling it a night. It was a fun, long trip, and I really didn’t want it to end so quickly. Fortunately, it looks like we’ll be heading back again in October for a wedding, so we’ll probably be seeing a bunch of our friends and family again a bit sooner than six years from now.

Introducing the children, grandchildren, and great-greatchildren of Uncle Ben and Aunt Carol