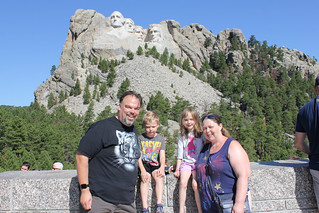 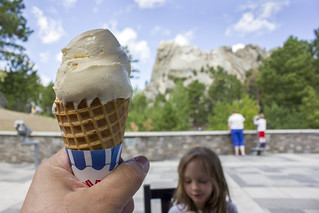 No trip to the Black Hills would be complete without an obligatory visit to Mount Rushmore, one of the most iconic American monuments in history. I’d visited twice before, once as a youngster and once again with Vivian on our one-year anniversary trip, but it’s always breathtaking to see the mountain-carved sculpture with my naked eyes. The kids seemed a little less impressed as we viewed the faces of Washington, Jefferson, Roosevelt, and Lincoln up close and personal, but we did get plenty of photos with them. We also stuck around for some ice cream, featuring vanilla allegedly made from Thomas Jefferson’s own recipe. 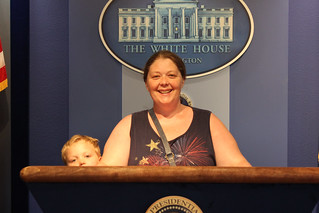 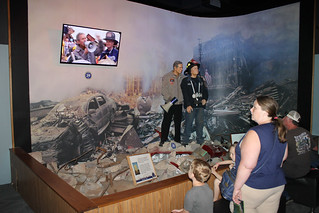 Afterward, we continued our Presidential kick down at the Presidential Wax Museum, nestled in the heart of the giant Tourist Trap known as Keystone. We got to see the faces of all 45 Presidents, as well as other historic figures. We couldn’t interact with any of them as we had with Madame Tussaud’s back in 2011, but we did get to see several famous moments of Presidential history, including the Lincoln-Douglas debate, Grover Cleveland’s wedding, the moon landing, the JFK assassination, and the 9/11 aftermath.

My favorite part of the visit was the mock Presidential press conference podium, where all four of us got the chance to play POTUS to no one in particular. The kids’ favorite part, however, was the bin of colorful rocks we let them dig through before heading out. Hannah in particular seemed to enjoy collecting rocks on our trip, continuing to find more and more to take with her at every stop. 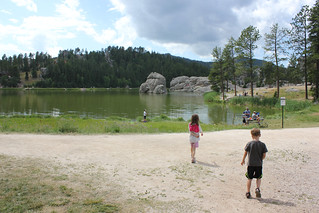 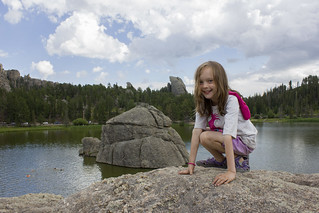 We drove on down (through a tunnel) to Sylvan Lake along the Needles Highway to have a little lunch and then get our feet wet. This particular lake was featured in the movie National Treasure: Book of Secrets, and Hannah and I got to climb on some of the same rocks traversed by Nicolas Cage and the cast of the film (from this scene, specifically). Aaron did some digging in the sand, but since none of us has brought swimming suits, we couldn’t get too wet before we left.

The lake itself was ridiculously crowded as well, for reasons I couldn’t quite understand, as there were plenty of other lakes nearby in the Black Hills. None of them featured the same fantastic rocks, however, one of which became a diving board for some people who didn’t seem worried about failing to clear the rocks below when jumping off. 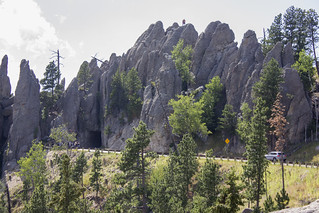 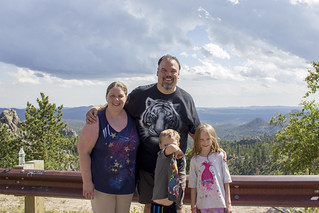 We took the long road back to camp, winding our way around the scenic Needles Highway. We got to see plenty of the tall, pointed peaks that give the road its name, and we also had to squeeze through a narrow called the “Needle’s Eye,” a bit of a difficult feat as there was only room for one car at a time and nobody around to direct traffic. On our way back down the mountain, we got to see some spectacular views of the hills and valleys below, and it was hard not to stop at every one to snap photos as we headed back down to the main highway.

On the way back to camp, we passed by the Crazy Horse Memorial, which we could clearly see from Highway 385. Vivian and I had visited it back in 2009, and I could barely tell if anything had changed since then, so we didn’t bother paying $30 to drive inside for a slightly closer look. 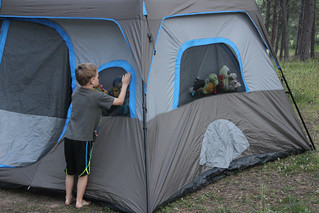 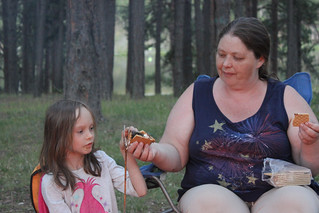 We made some foil-wrapped chicken and potatoes for dinner back at the campsite, which we baked right in the fire. Aaron created a kind of story with a collection of toys using our tent’s windows as “panels” of a comic strip. Then we had some more s’mores by the fire before calling it a night.