We’re approaching the end of September, but it feels more like summer now than the beginning of fall. That’s all right with me, though, as I hope to have more time to finish some work on the house and go on early morning treasure hunts with Hannah in the yard (and to Costco with Grammy). 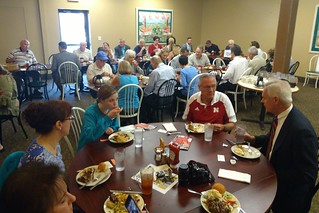 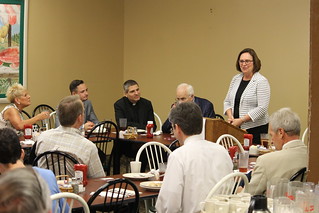 It’s also an election year, so that means meeting and greeting politicians ahead of the mid-terms, of course. On Friday, Senator Deb Fischer paid a visit to the Business and Professional People for Life luncheon down at the Garden Cafe. I got to attend with a number of my colleagues from the Pope Paul VI Institute and even got to share a table with Hal Daub and Mike Foley. There was something uniquely fun hearing Hal talking about free speech issues on UNL’s campus (as he’s a member of the board of regents) and watching the Lt. Gov. pass around photos of his new grand-baby on his cell phone.

Sen. Fischer also took several questions from the group on issues related to Planned Parenthood funding, bipartisanship in the Senate, and theatrics over the Cavanaugh hearings. Fischer said she’s driven 100-150k miles around the state during her term, and I think I believe it considering how often I seem to bump into her just in Omaha (unlike that other Senator we have). 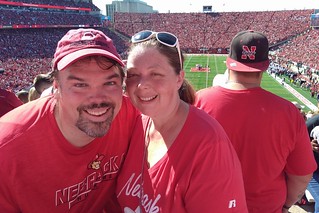 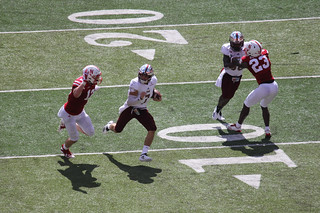 Fall also means it’s time for Husker Football, and for the first time in my 23 years of living in Nebraska, I actually got to attend a home game! I won a pair of tickets (generously donated by my boss) at a weekly drawing a work and got to take Vivian to see the Huskers play Troy at Memorial Stadium in Lincoln. We arrived just in time to follow a sea of red into the stands as the mascots goofed around before the National Anthem played, and then we baked in the sun for a couple hours as the Huskers lost 24-19. I’d watched plenty of these games on TV, but there’s nothing quite like watching it with the passionate fans in the stands (even when they’re clearly unhappy with the outcome). I even got to bring my DSLR with a telephoto lens to get some closer-up pictures of the action (and the crowd). I even got us a Runza to share for lunch, making for the most Nebraska picture in the world that doesn’t involve corn.

The only downer of our trip was getting a flat tire on the way out of the stadium, which meant spending an hour or two inflating it at a gas station down the street and then getting it patched up. I’ve never been so grateful for Walmart, as they fixed the tire when every other place in Lincoln was either booked solid or closed for the day. We finished off the day with dinner at Pho Nguyenn before a long ride home. 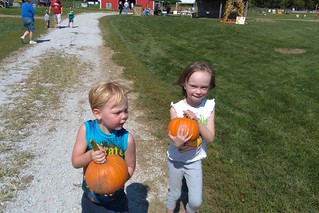 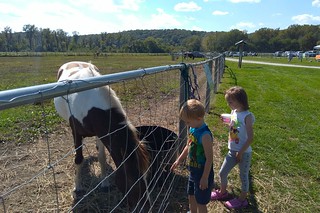 Fall also means the Fall Festival at Gifford Farm. We hadn’t been there since 2016, so it was good to get back and let the kids slide down into piles of hay once again. We said hello to the horses, chickens, cows, goats, and other animals. Hannah and Aaron also got to decorate cookies, ride a hay rack, and look inside their favorite hollow tree.

The kids played some more in the children’s area (making a “house” out of the various instruments, gourds, and utensils they gathered up), and then we finished our day buying some pumpkins and having some flavored ice before heading home (where we said hello to a woodpecker and bumblebees in our own yard). 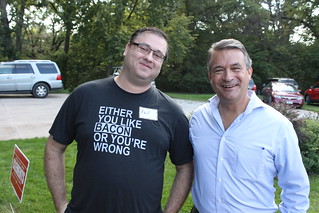 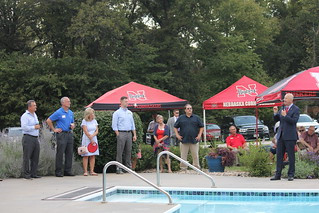 Temperatures stayed in the 90s throughout the week, which made for a steamy experience at meet-and-greet with local candidates hosted by the Sarpy County GOP. My friend Phil came (with an appropriate shirt) to meet folks like Congressman Don Bacon, who suggested throwing me in the pool, which would have been great if someone got it on video. Bob Evnen, Rusty Hike, and a handful of others also showed up, along with Gov. Ricketts. He actually came dressed in a tie and jacket and somehow didn’t even break a sweat until after his stump speech.

There was time afterward for selfies, of course, but no swimming actually took place. Between this event and the one on Thursday, I was repeatedly impressed with how easy it is for someone who’s not even a donor to the Republican party to have access to people running for office. (I don’t mind chatting with Democrats either, of course, but most of those events on my radar come with a price tag, and that’s a hurdle I generally won’t jump.)