Aside from a freak blizzard last week, spring seems to be pushing its way into Nebraska bit by bit. We had over a foot of snow come out of nowhere, but by Friday it was in the 60s and getting vaporized. As such, I took Hannah out to the park to play on some swings and be generally cute with Mommy one she got off work. 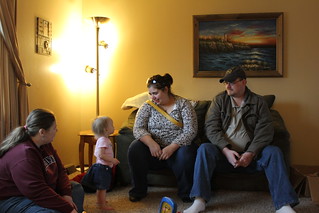 Our old friends Tim and Robin returned to Bellevue after a brief stint in Oregon and elsewhere, so they stopped by with Danny to say hello and meet Hannah for the first time on Saturday morning. I’d bumped into them back in 2007 when Danny was just a baby.

Monday was my brother Jonathan’s birthday, so he dropped by over the weekend, and we went on a spontaneous road trip together to Burchard, the hometown of silent film legend Harold Lloyd. It’s a tiny town near Nebraska’s southern border and doesn’t feature much other than an old bank and a sign or two advertising Harold Lloyd’s birthplace down on 2nd street. After a few obligatory pictures, we wiggled our way home past random sights in Pawnee City and Auburn. That evening, Jonathan made up some lasagna for dinner and we had some cake made by Donna. Oh, and presents, of course. Sunday was St. Patrick’s day, so Vivian and I spent much of it at Phil and Jen’s house having an ingredient party with an assortment of mutual friends. We’d attended two or these so far, and our favorite culinary duo always manages to turn random things into something delicious. This time around, Vivian and I brought eggplant and beef to add to cabbage, canned squid, pineapple, and any number of other things, which became some kind of mousaka, bubble and squeak and I’m not quite sure what else (but it was good). Hannah played with Dennis’ little girl Emily and was generally cute in her little Shamrock dress, and the rest of us watched Airplane in the background. For dessert, we had some kind of frozen dish infused with caramel Irish cream, which one person described as “better than sex.” Ahem.