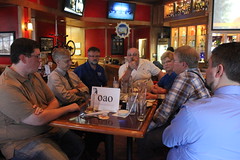 It’s been a fairly busy week for Vivian and me here in Omaha. Along with a flurry of meetings and projects at work, we both got to eat out at the soon-to-be-closed Venice Inn twice during the week — first on Tuesday with her parents (who had never eaten there before) and then again on Thursday for a pro-life luncheon. Our speaker was Carol Szczepaniak, whose son Joe was part of the chain that got me connected to the exciting job I have today. Then on Thursday, I got to attend a meet-and-greet at the Fox and Hound with Yaron Brook, the Executive Director of the Ayn Rand Institute. He was passing through Nebraska and made time to chat with a cluster of my Objectivist friends about the virtues of selfishness, among other things. 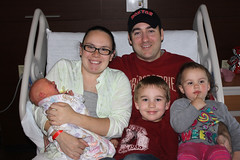 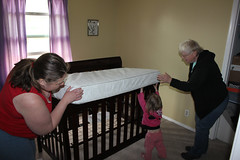 Spring is, of course, the season of new life, and in the case of the Mills is means a new baby boy named August. I dropped by the hospital to get their first family photo with their new arrival on Friday, which was a delight. Their son is going to be about the same as ours, and with Sam and Hannah nearly the same age as well, we’ve got some inevitable play-dates in our future, I expect.

At home, Vivian and I have been busy transforming my office into a new baby bedroom for our little boy. That meant hauling down bookshelves, filing cabinets, and entire desk, and my old desktop computer to the “dance floor” of our basement. It was a fairly exhausting task, but we got a little help from Hannah to finish the job on Saturday as we put the crib together. We went out for barbecue at Swine Dining with Donna and my parents to celebrate its (near) completion on Saturday. Then I got to spend the afternoon doing yard work, assembling a fertilizer spreader that I bought with my dad and putting down some weed and feed before some thunderstorms rolled by overnight. Things have been growing in our yard again, particularly the cluster of pretty tulips underneath our maple tree in the front yard. Hannah dropped by to let her Baby Cow sniff each of them while going on a walk with Grammy as Vivian and I worked on the house. 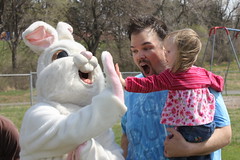 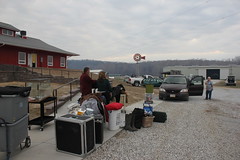 We had a lovely little Easter Weekend here in Omaha, now with both sides of the family on hand for the egg hunting and basketing fun. Vivian and I were at JNO to set up on Friday night, then got up (relatively) early on Saturday to take Hannah for her first big Easter Egg Hunt at the Bellevue Christian Center. She and a mob of other kids got to pick a playground lawn clean of plastic eggs, much to the approval of my folks (and the local Easter Bunny). They had games inside afterward, and Hannah got to “think outside the box” by walking around the tape in such games as bean bag toss (nobody said she had to stay behind it). We had some hot dogs for lunch afterward and Vivian said hello to a couple familiar faces before calling it a day.

That evening, an emergency call went out to volunteers at Gifford Farm. A brush fire was raging near the railroad tracks and the animals had to be evacuated. I helped Donna load up a van full of snakes, hedgehogs, lizards, and other critters we’d rather not have running loose and toted them to a shelter across town. Fortunately, the fire department kept the blaze under control, but things were smoky for quite a while. 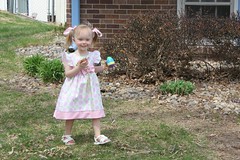 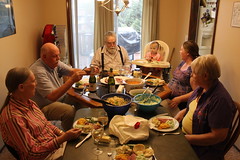 On Easter Sunday, we dressed up and went to church to celebrate Christ’s Resurrection properly with the gang from Twin Valley Church (and dedicate Baby Jonah). We returned home afterward for lunch and then took Hannah on an Easter Egg Hunt in our front yard. For the first time in over a decade, my parents were on hand to celebrate Easter, and they got to see Hannah picking up all sorts of plastic eggs around the yard (including plenty of animal-shaped eggs she didn’t want to let go of).

We wet inside afterward to nibble on a few hors d’eourves, and then we got to find some Easter Baskets filled with goodies hidden around the house. We topped off the day, naturally with our traditional un-kosher meal of ham and other things. It was the first time ever that both sets of grandparents got to have Easter Dinner with the Johnson Family, the first of many traditions of togetherness to come, I’m sure. 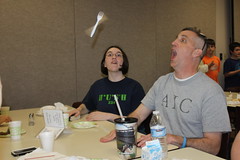 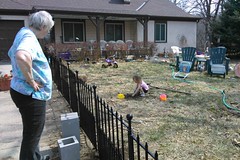 So it’s the week before Easter, and you know what that means — one last shot at pigging out, Lenten-Style. Eric and his Massively Chaotic crew dropped in at St. Pius X for their Pasta Feed, so we got the mix of spaghetti and mostaccioli with a helping of beer cheese and marinara sauce here and there. Mostly, though, we played with our phones, salt and pepper shakers, innuendo, and plastic forks for a couple hours. No, it doesn’t take much to amuse us, especially when cards and gooey bake sale nut rolls are involved.

We had some unseasonable warmth on Saturday, so I went to Donna’s house to help her put up a new fence in the yard, designed mostly to keep Hannah inside when she comes over to play with dirt. I got a nice, healthy blister on my hand at the end of it, but the results looked acceptable. 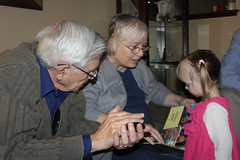 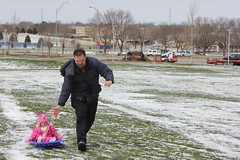 On Palm Sunday, Hannah joined a bunch of the little ones at Twin Valley Church to take a few laps around the sanctuary with plastic palm branches before the service (and then got some sugar afterward). In the meantime, my Uncle Ben and Aunt Carol came by to visit my parents, which was now the halfway point between their home in Scottsbluff and their other family in Cedar Rapids. Hannah hadn’t met either of them before, and we hadn’t seen them ourselves since they stopped by with the Garcia Herd back in 2010. It was indescribably sweet to watch them sing Jesus Loves Me together on a spur of the moment.

Naturally, Nebraska’s manic-depressive weather went from unseasonably warm 80s to freaking snow literally overnight. That made for a frosty Monday, which meant a lunchtime romp with Hannah and a sled down at Stinson Park. It was just above freezing, but I got to slide our little girl around the frozen lawn for a few minutes before retreating inside for Godfather’s Pizza and cupcakes for lunch. That’s quality time! 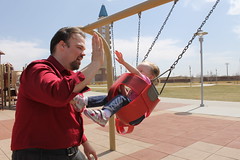 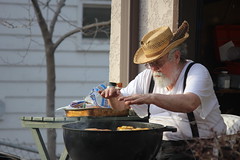 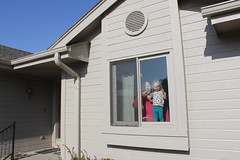 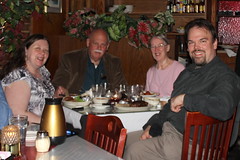 My parents are just about ready to close on their new home here in Bellevue. They had their final walk-through on Saturday, so Vivian and Hannah came along to take a look at it for the very first time. There were a few minor things that needed fixing, but everything looks clear for now. My folks did have some trouble getting the money from their bank to pay for the new house. The bank apparently won’t issue a cashier’s check or a wire transfer unless they show up at a branch in person, which made it necessary for them to make a brief day trip down to Kansas City on Thursday.

To celebrate the end to all the house-hunting madness, and my parents’ 29th anniversary, we took them out to Venice Inn to celebrate. The last of the Caniglia Italian restaurants in Omaha is due to close in a few months, so Vivian and I thought it would be a good idea to take mom and dad out for toasted ravioli, rib-eye and mostaccioli while we still had the chance. The place was insanely busy on Saturday night, as the rest of Omaha apparently had the same idea we did, because the place was packed wall-to-wall with people waiting for tables by seven o’clock (making me glad we got there at five). Jack and Donna also had a couple bags worth of housewarming gifts for mom and dad to welcome them to town, which they opened when we got home, most of which will help them get by untilt he moving van with all their stuff comes down in a week or so. 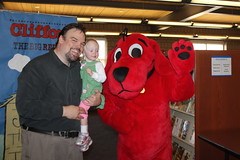 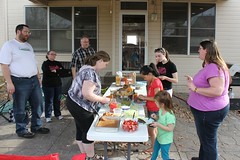 Sunday was Youth Sunday at church, which meant I got to sit with Vivian and Hannah during the service for the first time in over a year. (Usually, I’m stuck behind a computer screen doing the video.) I didn’t have to show up early for praise team practice either, so we got to have breakfast at Burger King ahead of time instead.

That afternoon, I took Hannah to Storybook Land at the Benson Library. Several storybook characters were there in full-costume for kids to meet, greet, and snap pictures with, including Clifford, Curious George, and one of the Wild Things. We made the rounds and got a free Curious George book for being able to meet every one of the characters on site.

We got a quick nap at home and then went to the Kuemichels’ house for some bible study time. We went through the story of Shadrach, Meshach, and Abednego and had some tacos together afterward. Ben also showed me his workshop/garage, and several of us busted out the family’s assortment of bikes. That meant Hannah got to try riding a tricycle by herself for the first time. The weather was just perfect for being outside, and now that spring is upon us, days like this will come quite a bit more often.