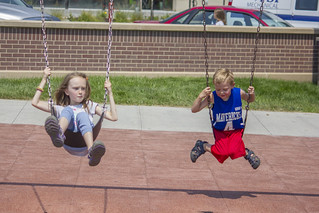 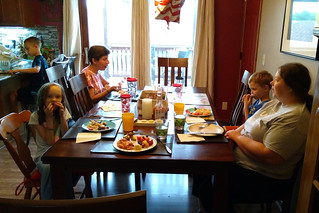 Now that our long, road trip vacation is over, we’ve had about a week to settle down before school starts up again. We took advantage by taking the kids for one last change to run around at Stinson Park with a few random kids (who had fun despite the oppressive heat and humidity). We also discovered our tomatoes were ripened in our backyard garden, so we immediately turned them into bruschetta.

Our friends the Lenarts invited us over their house for dinner in the meantime as well, giving us the chance to vent a bit about the craziness of an upcoming Kindergarten year for Aaron, specifically because much of it will be spent on an iPad. Our other nearby districts are doing at least a few in-person days of education every week, but OPS has decided the best learning environment for a Kindergartner is via Zoom meetings on a tablet. 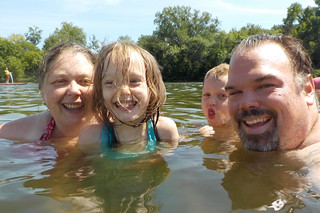 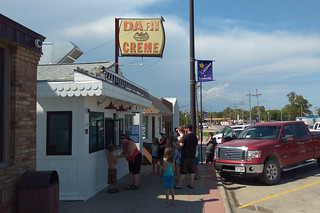 Then on Sunday, we took a trip down to Louisville Lake for one more chance to get wet before school starts. It was a lovely day for the whole family swim about and cool down, and I found the entire lake seemed shallower than last year, letting the kids stand up nearly all the way to the buoys flanking the “deep end.”

The kids got to use their floaties again as well, and after swimming, we drove by Louisville for some ice cream at the “Dari Creme.” We ate our cones out on the back patio where Vivian seemed certain there once existed some tables. Then we saw some thunderclouds slowly rolling in before heading for home. 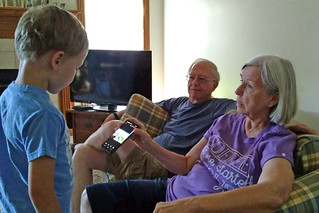 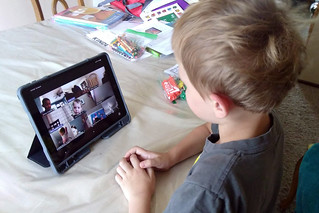 The day before school started, Aunt Nancy and Uncle Andy came by to visit. I walked Aaron over to say hello, and Vivian brought Hannah by after an orientation with our home school group. We talked a bit about our roads trip and the upcoming academic year, and Aaron got to practice his hand-holding exercises with Uncle Jonny before we left.

Then Aaron started school on Tuesday, posing for his annual picture before experiencing an entire day on an iPad. I’m having a very hard time imagining anyone expecting a group of Kindergartners to sit for four hours straight using an iPad, but that’s apparently happening. I got to sit in on a bit of Aaron’s class, which consisted mostly of the teacher telling all the kids to sit down and stop playing with things and keeping Aaron from hitting the mute button long enough to say “poopy pants.” I have a feeling homeschooling may be in our son’s future before long. 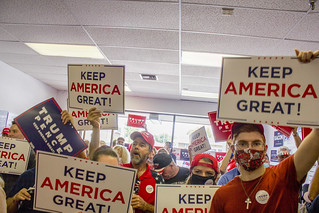 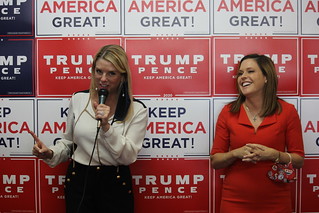 And because politics is still a thing (Did you know it’s an election year?), the Trump Victory Office in Omaha had its grand opening. I stopped by along with about a hundred other people to hear from Gov. Ricketts, State Rep. Lou Ann Linehan, and Omaha City Council Member Rich Pahls. We also had two special guests from Women for Trump — Pam Bondi and Mercedes Schlapp. They were in town along with Karen Pence doing some event with Don Bacon, but they stopped by long enough to say hello and encourage the crowd to get out and vote.

The Iowa Caucuses seem so long ago that I’d nearly forgotten what a proper rally like this felt like, but it was fun being back in the midst of it all again. I even got to see my old photographer friend Nati Harnik, who was there snapping photos before heading out.