It’s been another crazy, busy week at work and home for the Johnson Family (fueled by avocado toast), but at the end of it, we finally have a car once again, which was a relief. I was able to use it for several errands, including a lunchtime rendezvous with Vivian, Grammy, and the kids. 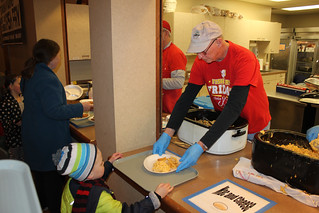 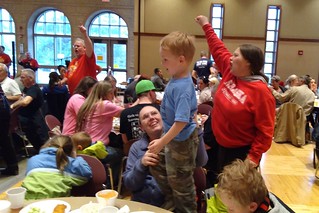 On Friday, we had our second fish fry of the year, this time landing at our traditional haunt, St. John Vianney. Our kids braved a cold and windy evening to play on the playground as we waited for our friends the Mills to arrive. Then we braved a shorter-than-usual line to get our annual dinner of fish, French fries, grilled cheese, tomato, and pancakes. Guitar Guy was there, as usual, to lead us all in “bah bah baaing” along to Sweet Caroline. When the food was gone, there was still time for some silly photos, and even Frank stopped by to frighten everyone with a new profile picture. 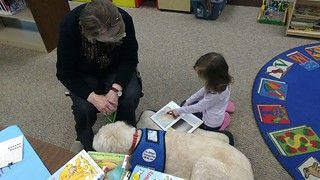 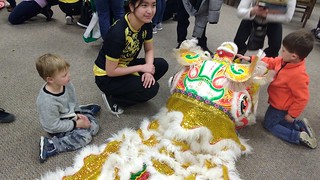 On Saturday morning, Hannah had an appointment to “read” a book with a sweet therapy dog named Gillian at the Bellevue Public Library. Then we stuck around for a performance of martial arts and Chinese Lion dancing courtesy of the Jing Mo Tong Athletic Association (from Lincoln). I’d never seen a performance like this before, which involved throwing tangerines and lettuce at the audience, among other things. We hung around afterward so the kids could touch a few of the lion costumes before heading home. 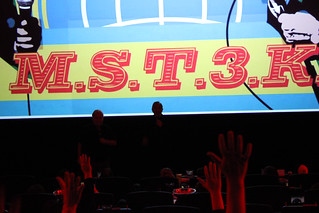 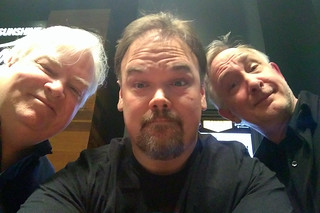 I took the kids out for some park time that afternoon. Then that evening, I dressed up went to see MST3K veterans Frank Conniff and Trace Beaulieu (AKA “the Mads“) once again for their third annual visit to the Alamo Theater. This was my third time seeing them riffing life, and my dad, brothers, and Richard Burney all came along as well. The movie of the evening was “The Creature Walks Among Us,” the third film in the “Creature form the Black Lagoon” trilogy, and the Mads’ riffing helped us get through some of the more tedious moments of the film, of which there were plenty (90% of them involving slow-moving boats).

Of course, I hung around afterward for the meet-and-greet, since getting a selfie with the villains from one of my favorite shows is always a thrill, even if I’d done it three times before. 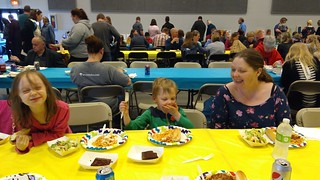 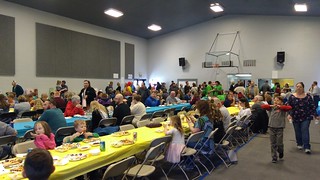 Sunday night, Wildewood church had a fundraiser spaghetti dinner for a young lady named Lexi, who’s been diagnosed with stage four bone cancer. Many local businesses donated food for the event, and there seemed to be a fairly good turnout, as the food was nearly gone when it was time for us to go. Hannah got her face-painted like a dalmatian and then got in some running around afterward with Aaron. Our kids can have fun with just a big empty field and a tree, which is a happy break from video games — now that we have the weather for it (random blizzards up north notwithstanding).