Vivian and I took a trip down to the Homestead National Monument in Beatrice yesterday and got “mooned” along with ten thousand other people (and Bill Nye the Science Guy), but it was an eclipse that nearly wasn’t.

I’d had the date for the Great American Eclipse on my calendar since I lived in Lincoln nearly a decade ago. People from all over the country came to be in the path of totality with us, and driving an hour or two to see it was relatively easy. The kids had to stay with Grammy and Pop-Pop for the day, as we weren’t sure we could keep their glasses on throughout the event. 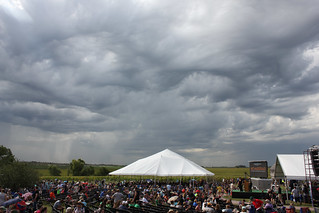 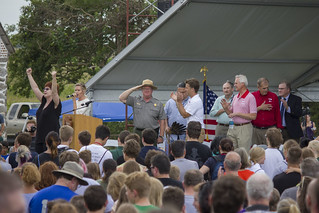 We left town at five o’clock, letting us beat the eclipse traffic and take a shuttle to Homestead National Monument in time for Vivian to catch a glimpse of Bill Nye making the rounds giving TV interviews. Vivian and I took a tour of the museum and got some pizza for a late lunch as the crowds continued to gather. The String Beans played some music for everyone, and Hannah Huston, Lincoln native and contestant on The Voice, sang the National Anthem to kick things off. I also managed to bump into several familiar (political) faces, including Sen. Ben Sasse, Lt. Gov. Mike Foley, and KFAB’s Scott Voorhees.

Our biggest concern was the cloud cover, which the staff in the NOAA tent said would be problematic. The day started off beautifully, but as eclipse time approached, a large chain of rain clouds came and obstructed our view of the sun. The event continued on schedule, even as the rain started coming down on representatives of the US Postal Service as they introduced their new eclipse stamp. 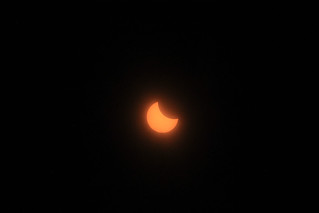 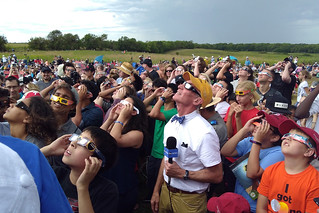 Part of the fun was being able to capture pictures of the eclipse as it happened. I had a modest paper filter and a telephoto lens to get my pictures, but several people brought much more elaborate instruments with them. As the clouds continued rolling by, Bill Nye had a Q&A panel with some members from NASA, and characters from the PBS show Ready, Jet, Go came to perform some music as Eclipse Time approached. (The lead guitarist was actually show creator Craig Bartlett, also known for creating the Nickelodeon show Hey Arnold!)

We got a few, quick peeks of the sun and moon converging as the morning went by, but they were fleeting, and it soon became apparent that we would probably miss seeing totality completely. Bill Nye continued to do more interviews and gave a demonstration of his fancy Eclipse Glasses with a group of people around him during one of the sun’s few peek-a-boo moments. 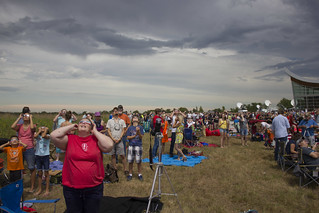 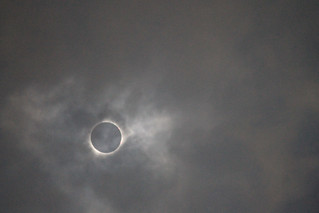 I got my camera ready as Totality approached, but it was nearly impossible to position the camera as the sky became a mass of thick, gray clouds. Around one o’clock, with a 360 degree sunset all around us, the whole area went from daylight to dark. Then it happened — a fully-eclipsed sun with a glowing corona emerged from the clouds to the screams of glee from the crowd. I snapped a bunch of photos with my camera but took in well over a minute of Totality with my naked eye, barely able to believe we’d actually seen it. A minute or two later, it was glasses on again as the diamond ring effect happened and a giant wave of light burst forth over the crowd.

Nothing quite captures the magic of seeing totality quite like that, and as Vivian said, it was “so much better than staring at a light in a box.” 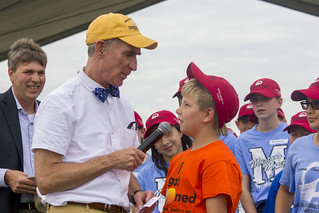 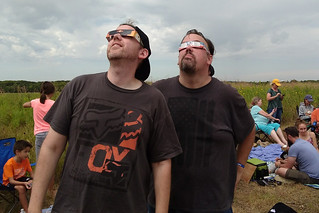 There were more events even after the eclipse, as the moon moved back away from the sun. Bill Nye brought some Junior Rangers on stage for some Q&A and took the Oath with them and the crowd. He even stayed to sign autographs before doing more media interviews, which was nice. Vivian and I stayed until the park was nearly emptied out, looking inside the homesteaders cabin and watching the eclipse through its final phase. The Spitfire Fiddle Band took the stage to play us out with their fiddles as thousands of people stood in line for a couple hours to ride back to the parking lot.

Everyone at the event did a great job making it a memorable experience for everyone. (And if you didn’t get to buy a couple eclipse glasses for $100 each from a scalper, they had plenty of extras.) One of the best parts of this day was sharing the same celestial experience with so many other people from all over the country. We were sitting next to people from San Diego, San Antonio, Wisconsin, and Minnesota, and we ran into others from as far away as Australia. We were all one family for this moment — regardless of background, beliefs, or political party. It was a beautiful thing.

I’m already getting excited for 2024.

Video highlights from my brother Nathan

Other videos from the event at Homestead National Monument