Our little girl turned eight over the weekend, so we celebrated for a couple days with friends and family on Friday and Saturday. 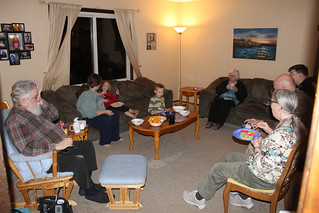 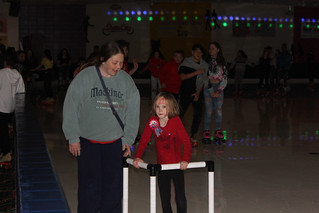 First on Friday, Vivian and I blew up some balloons to greet Hannah when she woke up, per tradition. Then, I made Hannah a special “8” pancake in the morning before she headed off to her home school co-op. Then that evening, we had all four grandparents over (and Uncle Jonny) to share in some of Hannah’s favorite foods for dinner — shrimp, oranges, strawberries, black olives, and potato chips. She got to open up some presents as well, including some calico critters, a baby doll, a musical puppy, and a “Little Live OMG Pet” from Uncle Jonny.

After blowing out a candle on her cupcake, we headed on our to Skate City afterward for some evening roller-skating with friends (and some hot dogs). Hannah and Mommy strapped on some skates and took a few laps around the rink, and even daddy took a turn rolling around trying desperately not to fall over (Aaron was preoccupied with some classic arcade games). Our friends the Mills came by to skate as well with us, but they unfortunately weren’t able to stay long. Miss Lexi took a tumble and somehow fractured her fibula, which is going to require surgery to fix. Vivian’s already planning a meal train to help her out while she’s recovering from that. 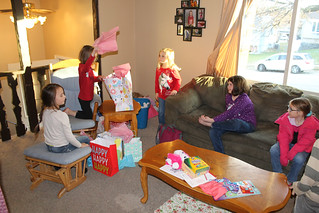 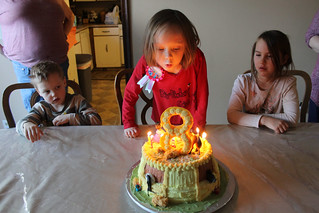 Then on Saturday, we invited a handful of Hannah’s friends over to celebrate her birthday together. Donna brought a cake modeled after the girls’ equestrian Netflix show “Spirit” with a giant “8” on the top. Hannah got a few new presents from her friends as well as Uncle Nathan, who stopped by just long enough not to have any cake. Hannah’s friends mostly played with one another as the moms talked, and then Hannah and Sammy put together horses out of foam tiles as a craft before calling it a night. 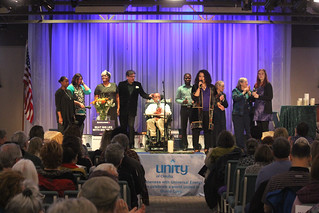 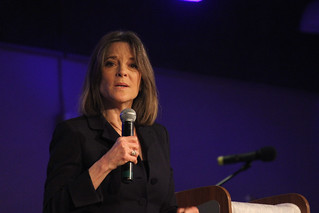 And because we’re still in a perpetual Presidential campaign season, we had a few more candidates some around. Last Sunday, it was Marianne Williamson, a kind of new-age spiritualist who actually spent three days in the Omaha area making appearances. She visited Unite Omaha on north 90th on Monday night and spoke to a few hundred people in something that felt more like a church service than a campaign rally. There was even a legit choir singing hymns about Ferguson and “hands up don’t shoot.” Marianne gave an hour-long stump speech touching on standard Democrat topics such as climate change, reparations, and the evils of “trickle-down” economics. This was followed by a Q&A with audience members, some of whom seemed even more colorful that the candidate — one being an anti-vaxxer and another being a member of the “UFO community.”

She stayed afterward to meet and greet guests and sign autographs. I got to meet her briefly and commented that a quote she cited that was often attributed to Voltaire (“To learn who rules over you, simply find out who you are not allowed to criticize”) actually came from a Neo-Nazi. This upset her enough that she had to run back stage to delete a tweet she shared recently that included the quote. While I wasn’t that impressed by her political idea, I did appreciate her understanding that political animosity is not all coming from one side. One man had asked what he could do to get family member to see Trump “for what he really is.” Marianne responded that his family members feel the same way about Democrats. “We’ve got to stop projecting onto others that their values are inferior,” she said. 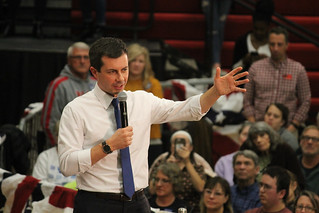 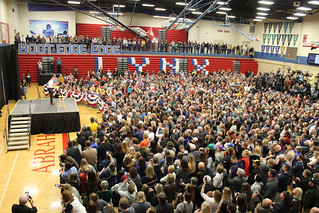 Then one week later, Mayor Pete Buttigieg from South Bend, Indiana came to town. He’s currently the front-runner and spoke to a gymnasium of around 2,100 people at Abraham Lincoln High School in Council Bluffs. I was a little late to the event (having a toilet emergency at home that needed overseeing), so I didn’t get close enough to ask Mayor Pete to go on the Ben Shapiro program. I did get a nice spot on the balcony to snap pictures of the stage below, which was a good enough spot for a guy from the New York Times to stake out as well.

Mayor Pete seemed to be a very polished, articulate candidate who knew how to work a crowd, but I found a lot of his talk about “uniting” the country to be terribly disingenuous. He went almost immediately from talking about “values that unite us all” to praising abortion and the impeachment proceedings, which brought easy cheers from a left-wing crowd but were unlikely to get the “other half” of the country on board. I also couldn’t help but notice the crowd was almost entirely white. This isn’t something I normally care about, but it highlighted the difficulty Mayor Pete has had connecting to black voters. I guess using stock photos of Kenyans didn’t help bring anyone on board.

Next stop: Thanksgiving, and the kick-off of the Christmas season!