I spent the day on Sunday with Brandon Straka and his gang from the #WalkAway movement — a campaign of former liberals who’ve found themselves pushed to the center as the American left moves further to the fringe. The event was jointly-sponsored by the Nebraska Log Cabin Republicans and the Nebraska Liberty Caucus, and like Scott Presler’s visit a few weeks ago, there was a significant emphasis was on building a “big tent” party (specifically including the gay community). 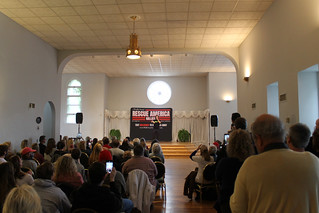 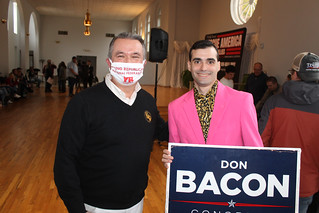 The day began with a “Walk Away Rally,” which was moved from Memorial Park to the Starlight Chateau due to winter-like conditions that dropped on the city with a dusting of snow, and a crowd of a little over 100 packed the hall. While they were mostly conservatives, I got to chat with one guy who supported Amy Klobuchar but was also voting for Don Bacon. He didn’t like the way Kara Eastman treated her Democrat primary challenger Ann Ashford, and he’d been brushed off by her campaign while being greeted by the Bacon Brigade with open arms. He’d also been called a “closet homophobe” for not supporting Mayor Pete and a racist for not supporting Kamala Harris, who was his second choice. 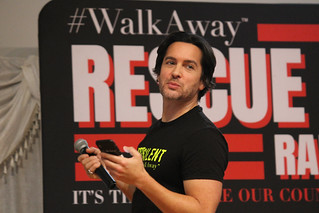 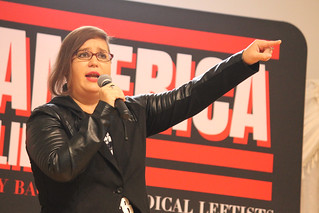 The rally started with the pledge of allegiance and the national anthem, both initiated with a flag from the audience (as the venue didn’t seem to have one). Then Brandon Straka took the stage, introducing himself as a Nebraska native from O’Neill who left the state a liberal and returning as a conservative. He also talked briefly about the WalkAway campaign and highlighting the bias in the media, who refused to cover violence directed at his members and instead trying to blame them for initiating it. Congressman Don Bacon took the stage next, making his case for a third term in Nebraska’s second district, and then KFAB’s Chris Baker played emcee introducing the rest of the WalkAway gang. First up was Karlyn Borysenko, who found herself castigated when her knitting community went woke (knitting the “pink pussy” hats you may have seen at the Women’s March). Next was political commentator Shemeka Michelle, followed by the most “banned person on Twitter,” Mike Harlow. 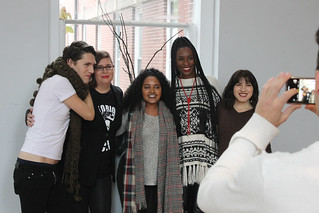 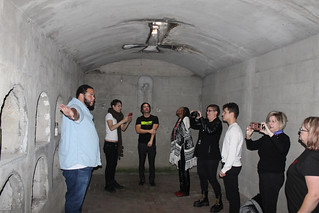 Straka re-took the stage briefly to introduce a woman named Lydia, who is a Catholic living in Bellevue who emphasized the “big tent” idea that we don’t have the luxury of voting only for people who align with all our religious beliefs. Straka then led the crowd in a sign-holding chant to wrap up the rally, which he posted as a video on Twitter.

Following the rally was around half an hour for pictures and selfies with Straka and his gang, and among the audience members getting photos were Straka’s parents, some of Omaha’s finest, and me, of course. After most of the guests had cleared out, Straka then took his WalkAway team downstairs to check out the crypt beneath the Starlight Chateau. The facility had once been a monastery with nuns entombed underneath in a series of vaults in a crypt, which the gang dubbed “Biden’s Bunker” before heading back upstairs. 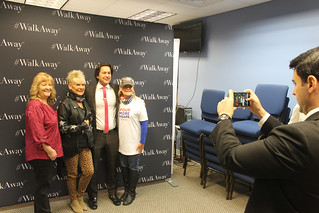 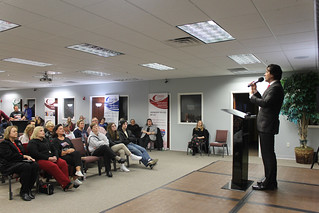 Then that evening, Straka and the WalkAway gang went up to the Cross Training center on north 72nd for a more dressed-up evening with a few more guests. More people got pictures and selfies during the cocktail hour, and then KFAB’s Scott Voorhees played emcee, introducing Straka and the WalkAway gang as they spoke a bit more about the campaign and their experience being homeless former liberals after the ground shifted left underneath their feet. Most interesting among the evening’s guests was Chris Janicek, the Democrat running against Ben Sasse for the United States Senate. I didn’t get the chance to ask if he were walking away, but he stayed a while chatting with guests, including Straka’s parents before the evening wrapped up.

It was a long, fun day for me, being engaged in politics, but I found it particularly interesting how the political ground has shifted so significantly since the days of George W. Bush. There is a clear libertarian movement on the right that eschews foreign wars and embraces gay marriage and legalized marijuana and a strange, almost religious purity test on the left that’s leaving more and more Democrats without a home. It will be interesting to see how this continues to evolve after Election Day.