We just wrapped up a fun-filled weekend that involved both Father’s Day and an actual tornado in Bellevue, but first I wanted to write a brief political post. 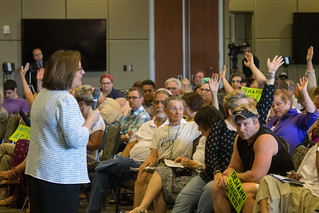 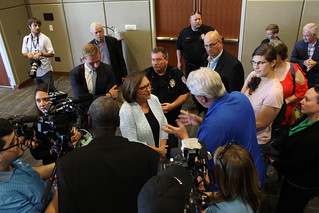 One of the best things about our Republic is the back-and-forth average citizens are allowed to have with those who represent them, so on Friday, I decided to attend a “listening session” with Nebraska Senator Deb Fischer. It was held her at the Fort Street Campus of Metropolitan Community College near the heart of North Omaha — not friendly territory for a Republican by any means. Word of the event had spread among left-wing circles in Omaha, so when I arrived, the room was filled with rainbow–haired SJW-types, some of them handing out signs that said “demand single-payer” and “save the ACA.”

To her credit, Senator Fischer took questions from just about everyone, particularly those were were clearly hostile to her and the Republican Party. I think the left-wingers in the crowd were more interested in the catharsis of yelling at a Republican than having a dialogue, but Sen. Fischer didn’t even blink as she took their questions. She even stuck around afterward to take more questions one-on-one before she left.

What impressed me most about the whole exchange is that Senator Fischer didn’t have to hold a session like this at all. Brad Ashford didn’t hold even one town-hall event during his brief two-year term (which may be one reason he lost his seat to Don Bacon). Fischer also could have held an event like this with a much friendlier crowd in West Omaha, but instead she willingly walked into a lion’s den and met with some very angry people who would clearly never vote for her. That gives her high marks in my book. (And speaking of books, yes, I gave her a copy.)