Wednesday was an exciting day in politics for Omaha as Ben Shapiro, host of the popular podcast and editor-in-chief for The Daily Wire came to speak at Creighton. General admission tickets were available on January 31 but sold out within a couple hours, and there was still so strong a demand for seats that people were offering cash money for tickets on the TPUSA Facebook Page up until the day of the event. 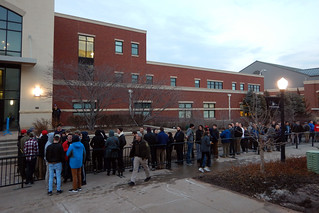 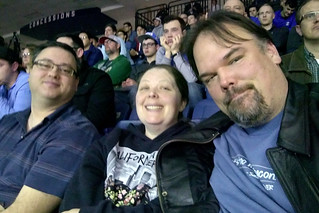 I was ready to grab tickets for me and Vivian once they became available, and then we turned up a couple hours before the doors opened to get a couple good seats inside (along with a bunch of other people). We arrived just as a literal busload of security guys showed up to secure the event. There were guys on rooftops and on horseback and several others with full riot gear assembled in case there was any trouble. It was truly bizarre, particularly since only TWO protesters showed up, with a single sign to share between them.

There were 1900+ other people there with us, some of whom sponsored the event and got good seats down on the floor (and some even getting to take pictures with Ben Shapiro at a private meet-and-greet beforehand). Such noteworthy VIPs included Nebraska Lt. Gov. Mike Foley and several state senators in the front row. We bumped into our friend Phil in the long, long line outside and sat with him up in the free seats before the event kicked off (nearly an hour late, much to the irritation of people online trying to find the live stream). 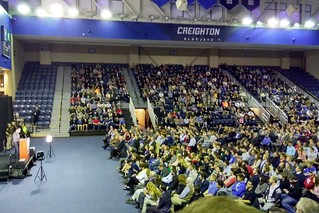 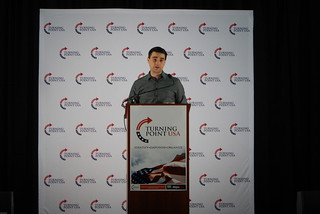 Ben Shapiro came out to a very enthusiastic crowd around 9:20 and gave a half-hour talk on the Second Amendment, which you can see online. Then he had about half an hour of Q&A afterward, most of which involved the second amendment but also included a few pointed questions from a liberal guy and more questions (and an “air high five”) from a guy I’m pretty sure was stoned.

It was an exciting event, though I had to go back to the live stream of the speech to catch everything Shapiro said, as the acoustics in the arena made it difficult to hear (and I spent half the time taking photos, of course). Mostly, I was amazed to see how many young conservatives there were who not only came to the event but also helped to organize it. The absolute overkill with security was amusing too, of course. Creighton University is most definitely not UC Berkeley.