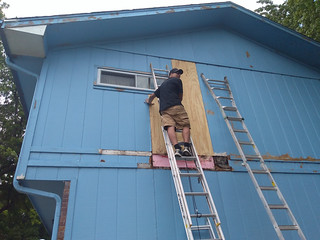 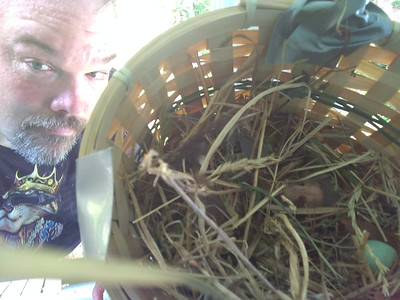 I’m still recovering for a busy weekend doing some more home improvements around the house. There’s some rotting siding on the east side of our home that our friend Nate offered to help me replace — and by replace I mean do almost everything as I mostly held ladders and fetched things. In addition to the siding itself, there were two “bird boxes” that were severely deteriorating — one of which had an actual nest of baby starlings living in it. We called the Bird Rescue hotline to try to figure out what to do with them, and they suggested placing the next in a basket as close to the original location as possible. The birds will still flopping about and peeping when I put it up next to our gutter, so at the moment we’re praying Mama Bird finds them well.

Nate and I spent all Saturday and half of Sunday on the siding, which included a trip to the Menards in Fremont, which was the closest place that had siding to match (and an automated floor scrubber). Even now there’s still more to finish up, but the hardest parts are all over. Just a few more inches of siding to patch up and caulk and then a fresh coat of paint on everything. We thanked Nate with some sushi from Jade Palace but will have to do something more special once everything is done.

In other news, we’ve had Mama Ginny over to spend some extra time with her son while the Mills took a trip to South Dakota. 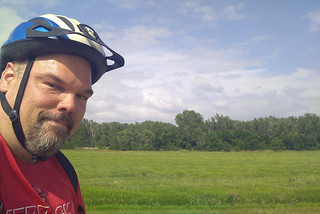 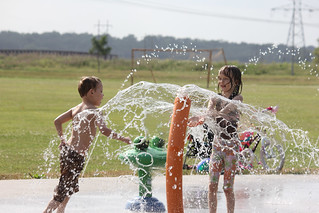 It’s been consistently hot and muggy week after week in the meantime, but that hasn’t kept me from firing up the grill to make brats or riding my bike to work every (though random road destruction on the Keystone Trail has made the latter more difficult). There’s nothing more refreshing after a hot bike ride than chasing a couple kids through a shower of ice-cold water. Vivian was also nice enough to bring along a picnic dinner for us to eat together before heading home.

Next stop: Fourth of July!