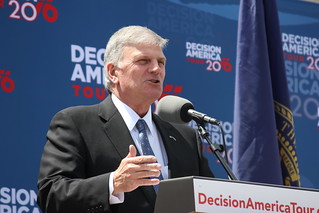 Wednesday was an especially fun day for the Johnson Family as we loaded everyone up into Grandma and Grandpa Johnson’s SUV and took a road trip down to Lincoln to see Franklin Graham on the Capitol steps. Franklin Graham, son of revered evangelist Billy Graham, is visiting every U.S. capitol as a part of his Decision America tour to encourage Christians in all fifty states to pray, vote, and run for office. We arrived an hour early and saved a spot for all of us to sit. Then Vivian and I took our kids inside to tour the capitol with them for the first time, which included a trip up to the very top to look down at the crowd below. Vivian and I had visited the capitol twice before in our dating years and again for our sixth anniversary, and it felt special to share the experience with our own kids now.

Back outside, the crowd grew to over 3,200 people as everyone began to wave flags and sing along with the praise team up on the steps. Rev. Graham took the stage shortly after noon to speak to the crowd and led everyone in prayer for the nation’s elected officials, as well as personal forgiveness for the nation and its people. Graham didn’t endorse any specific candidates of course, but he was insistent that everyone get out and vote, even if it means “holding your nose” to vote for the lesser of two candidates. I could only imagine who he might have meant by that. 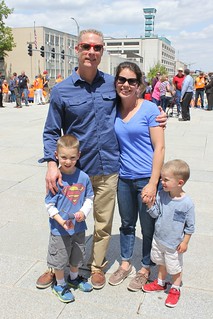 We saw a couple friends in the crowd once everyone started to disperse, including our old friends Mike and Bekah, who have one more kid since we last saw them over three years ago. We also bumped into Sarah Redfield, who we hadn’t seen since her 80s party back in 2008. She’s now married, lives in Lincoln, and has two kids.

The kids got to stretch their legs a bit as the grandparents went into the Capitol to meet a state senator or two, and then we all went out to eat at my favorite pizza joint, Big Sal’s. We made a serious dent in two giant combo pizzas and then took the scenic route home via Highway 34. (For those interested, Rev. Graham went to eat at the Hog Wild BBQ Pit. I’ll have to try them next time.)

Photo of Aaron at the top comes courtesy of Franklin Graham’s Twitter Team.