Merry Christmas, everyone! The Johnson had a lovely yuletide with the family, celebrating with presents and eating way too much food, per the norm (including tamales, Nachos Navidad, and the occasional graham cracker gingerbread house). 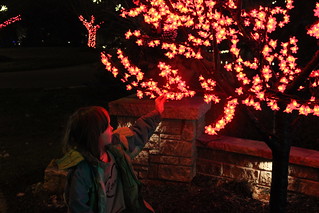 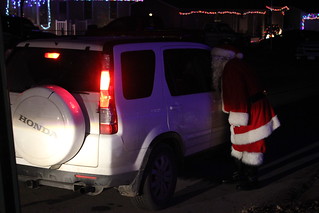 We kicked things off on Friday the 21st by driving around town and looking at Christmas lights on display. Wood River Drive had a lovely display that featured Santa handing candy canes out to those of us driving past. We went by Linden Estates up north as well, and Hannah and I dodged traffic and tour buses to get a close-up look at the glowing trees on Nicholas Drive. We swung by Aksarben Village to see the Stinson Park spire lit like a Christmas tree and then headed north to Memorial Park, lit up in red, white, and blue splendor. We finished off the night with the most elaborate display in town, which was ironically a few blocks from our house. Every year this thing seems to get bigger — I suspect the owners add a new bit ever season.

I burned CD with a custom mix of traditional Christmas songs to keep us in the spirit all on our drive, which was a welcome change from the local “Christmas station” that plays mostly ads in-between non-stop loops of “Last Christmas,” “Simply Having a Wonderful Christmastime,” and other horrible ear worms from Michael Buble and Mariah Carey. 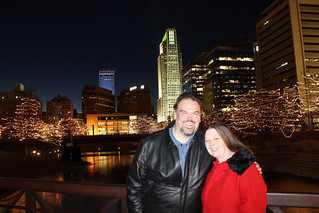 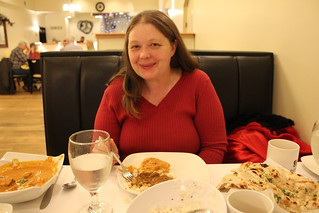 Then on Sunday, Vivian and I celebrated our twelfth first date anniversary in downtown Omaha. We had plans for the night other than dinner, so we wandered through the near-frozen waterfront by the Gene Leahy Mall one more time and wandered by our favorite candy shoppe, where the candy man was busy making a chocolate cabin, among other things. We got our usual batch of Christmas fudge before heading back to have dinner at a lovely new Indian place we stumbled upon named Shahi (in what use to be in the O Lounge). Vivian and I stuffed ourselves with a dinner for two, which included a handful of appetizers, lamb curry and chicken tikka masala over rice and garlic naan bread, some tea for each of us as well as dessert (which we didn’t have room for).

We took one last walk down to our favorite bench just t say goodbye, as the city plans to destroy this lovely little spot in town and remodel it for a couple years. I for one will certainly miss it. 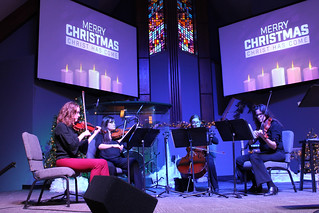 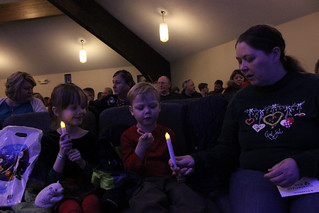 I took a half-day on Monday and then went with Vivian and the kids to the four o’clock Christmas Eve service at Wildewood (dressed in our Christmas finery). I was somewhat surprised to find the place packed wall-to-wall, with only a handful of seats available and ushers hauling out rows of folding chairs for the near overflow crowd. A string quartet from the Omaha Symphony played music up front as the Pastor led everyone in a series of scripture readings, songs, and a skit revolving around Away in a Manger. We also had the obligatory candlelit singing of Silent Night (with glow sticks for the kids). Afterward, we were invited to put prayer requests on the “western wall,” as well as sending selfies to people we cared about. It was a nice little service, but if we return next year, we’ll have to try to come earlier (even though we won’t). 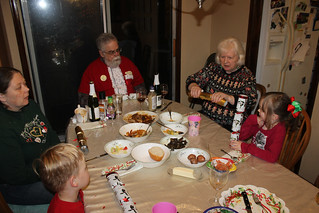 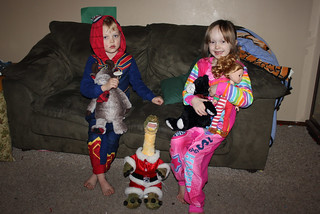 Back at the house, Jack and Donna came by to prepare a roast beef and potatoes for a Christmas Eve Dinner. After dinner, we introduced the kids to some Christmas Crackers, which they had fun pulling on to open with us but were somewhat underwhelmed at the prizes inside, which included a luggage tag, a tape measure, and a tiny picture frame, among other things. We settled the kids down for a long winter’s nap in their new Christmas jammies before hauling out a truckload of gifts from the car to start arranging underneath the tree. We basked in the tree’s glow for a little while afterward and had some candy cane pie from Village Inn, which Jack had apparently been saving for weeks.

There was certainly something magical in the air this Christmas Eve. I was actually so impressed with the full moon when I took out the garbage that I let loose with a jolly “Ho ho ho” as loud as anything that might come from Saint Nick. Little did I know, however, that Hannah was still awake in her bed and bolted out of there in shock at having actually heard Santa Claus. 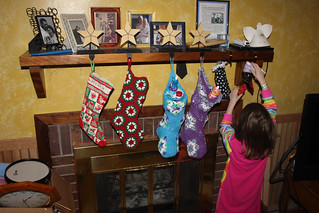 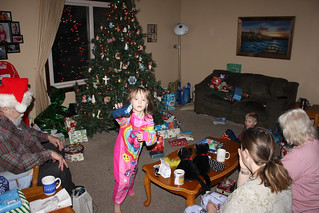 Hannah, of course, could barely contain her excitement as Christmas morning approached and actually got up to peek in a few stockings (one for her doll) and set out her toys to watch the tree. Vivian and I eventually got up a little after six to have coffee and then have Hannah hand out the presets as we slowly set about opening gifts. Hannah got some toys based on characters from a few of her favorite shows, and Aaron got a plush Kirby, a new sled, and a comfy new sweater. Both kids also got a pair of plush sleeping bags for sleepovers, the first of which they got to have in our living room at the end of Christmas Day. I got some new cargo shorts, a fidget spinner, and an ice bucket, among many other things, and Vivian got a giant Bible timeline, which well have to figure out where to put someday.

Sometime mid-morning, I popped some quiche and banana bread in the oven, which I’d prepared in a rush the day before. We had a nice little Christmas brunch together (and mincemeat pie afterward) as a break from opening presents and then let the kids watch Rudolph the Red-Nosed Reindeer before setting about opening stockings as the afternoon began to wind down. 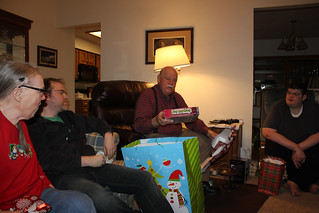 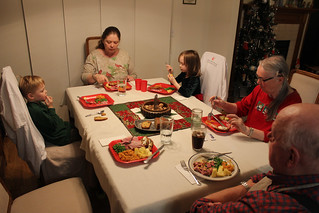 It was a rather pleasant 45-degrees outside, so once Jack and Donna headed home, I walked to my mom and dad’s house with Hannah and Aaron for a lovely Christmas Day walk. We got to open a handful of new gifts at my parents’ house, which included a Squirrel Girl for Hannah and a plush Mega Man for Aaron. I’d bought a bone-in ham for dad to cook in the oven, and we all sat down for some Christmas Dinner around six. We opened a few more gifts afterward, which included a Nintendo Switch from Uncle Nathan to Uncle Jonny. I borrowed it long enough for some soy face selfies and then let the two of them play some Smash Brothers as the rest of us packed up and headed for home.

I’ve got the rest of the year off now as I use up some accumulated vacation time at work, getting to do such mundane things as getting oil changes for our cars and catching up on laundry and housework. The end of the year is just around the corner, though. Stay tuned for a few of my highlights through the year as we close out 2018!

A full, unedited 36 minutes of Christmas.