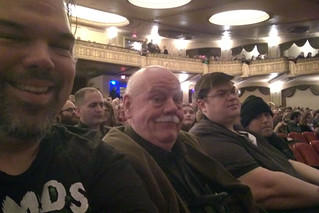 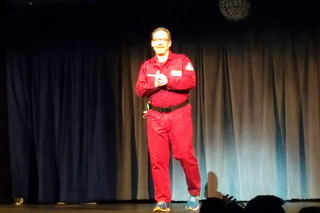 There were a couple more fun things in store for us this week. On Tuesday, Joel Hodgson of MST3K fame came to Omaha to riff a movie live at the Orpheum. I got some Chinese food before the show with dad, Uncle Jonny, and Richard, and then we met up with Nathan to get wanded up and down before squeezing inside the Orpheum to find our seats (with LIsa’s help) with a couple hundred other MSTies. As usual, there were a number of dressed for the occasion, either as a character from the show or toting a life-sized Tom Servo.

The show itself followed the format of the original MST3K TV show. Joel came out and played the theme song on guitar (with the audience chiming in with a “la la la” or two), and then they introduced the cast — which included an “assistant” named Emily, a Pearl Forrester clone (and some Pearl puppets), as well as Krow and Servo. The movie being riffed was a monumentally cheesy Karate Kid knock-off called No Retreat, No Surrender, which was so delightfully cheesy it could be watched without riffs. Joel and the Bots performed a few skits during breaks (preceded with video of the classic “tunnel sequences”), and they had a curtain call with the actors themselves at the .

It was a very good show, though it felt like a much more formal a production than the similar shows I’ve seen with “the Mads.” Specifically, Joel and his cast stay on stage, while the Mads sit with the audience and have a Q&A after each show making for a much more interactive experience (especially with the meet-and-greet time before and after the show). Still, as a long-time fan of MST3K, it was great to see Joel himself up close and personal for one last “movie sign.” 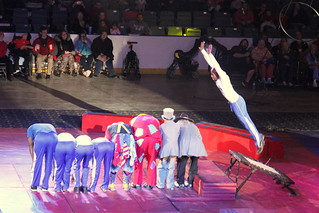 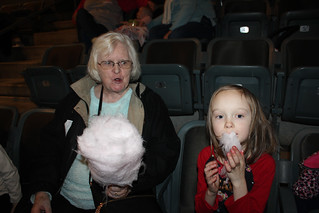 Then on Thursday, I took the entire day off just to enjoy about an hour at the Tangier Shrine Circus in Council Bluffs with Vivian, Grammy, and the kids.. They performed a shortened “free” show on Friday, which included a motorcycle on a swing, some trapeze artists, quick-change artists, a dog show, and a few acts by the local Tangier clowns. They had one new act — a trio of motorcyclists riding around simultaneously inside a spherical cage. My favorite act, however, was the Chicago Boys, who I’d seen multiple times before bouncing around and jumping rope to energetic music. Aaron actually got up and started dancing during their act, which was especially fun to see. Grammy also bought the kids some cotton candy just to get the kids properly sugared up before we headed home.

In the meantime, we’ve had a couple lovely weekends with spring-like temperatures — warm enough to venture at least one trip to Stinson Park during a lunch break this week, and likely more on Saturday. Soon enough it’ll be time for flowers to blossom and for me to get back to work on the lawn and garden again.