Summer vacation’s officially over now, and fall-like weather is starting to make a welcome return. That seems to mean packing more fun into every possible moment, right before I turn one year older. 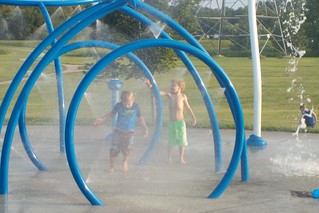 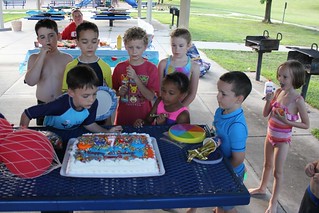 We kicked off our busy weekend with our old friends Randy and Jolene to celebrate their son Emmett’s birthday. They had it down at Eagle Ridge Park, which had a playground and a splash pad separated by a small bridge, so we wound up wandering between the two with the kids to play and get wet, alternately. Randy grilled some hot dogs, and Jolene brought out a piñata for the kids to take a couple whacks at before we had cake.

We had a handful of old friends with their own kids, as well as a second birthday party next door, so we had a veritable zoo of kiddos playing together most of the evening. Mostly, though, it was just gorgeous, end-of-summer weather. (We also got some cool shades to take home afterward.) 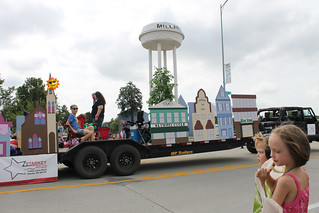 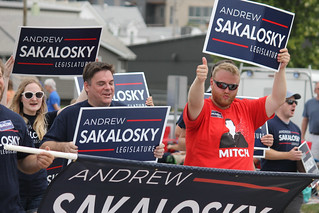 The next day, I was able to drag the family all the way down to Millard to enjoy at least one legit parade together before the summer ended. It was the perfect morning for a parade, cool and cloudy with a slight breeze. A handful of our favorite politicians were walking the catawampus Main Street, including Mayor Stothert, Don Bacon, and state senate candidate Andrew Sakalosky (as well as a guy with signs for a dozen more). Most of the parade had local businesses and churches giving out candy (and frightening children), as well as some Irish dancers, Country Kickers, and a few marching bands. A few men riding lawn tractors pulled a train of kids through the parade, and one guy rolled a giant beach ball toward the end (for reasons I can’t explain). One float even featured the model of Millard itself.

Our kids got a decent haul of candy, and then we stopped by BIG Meats afterward so Vivian could get a nicely-marbled hunk of beef to take home (as thanks for letting us use their parking lot). 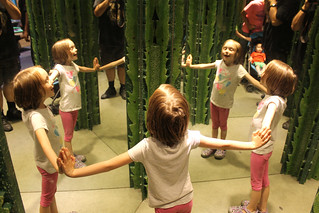 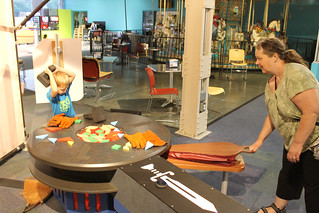 On Sunday, we spent the evening at the Children’s Museum with the kids. They got a brief look at their new playground outside before going in to have the usual run of their balls in pneumatic tubes, makeup table, model river water table, pretend cooking, Gordman’s animal slides, and baby hospital. We had the most fun upstairs for an “Enchanted” traveling exhibit that featured such things as a “hall” of mirrors (which was about the size of a closet), a blacksmith table with a giant foam hammer, a bubble fountain, and a stable with a dozen plush unicorns for Hannah to care for.

The whole night was hosted by the Autism Society of Nebraska, which had some of the sensory overload of the Museum tamped down just a tiny bit, (though with all the kids running around you might not have noticed). 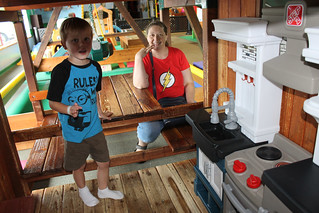 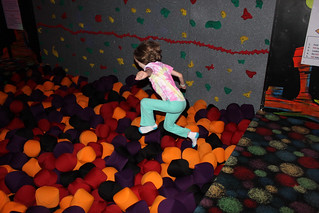 Hannah started the second grade on Monday (with a picture, of course). Then we spent a long, fun day in Lincoln on Tuesday. The kids got to play at Lost in Fun down in South Lincoln, getting their fill of a foam ball pit, climbing wall, and bounce house for most of the afternoon. In the meantime, I did some freelance work for my old company Land and Sky, shooting video and taking pictures of beds, continuing a gig I started some 15 years ago.

Before we headed back to Omaha, we dropped by Big Sal’s to grab a giant combo pizza for dinner together. (Hannah wanted to stick around and shoot some pool in the meantime.) 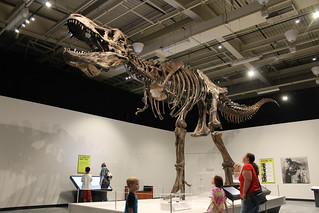 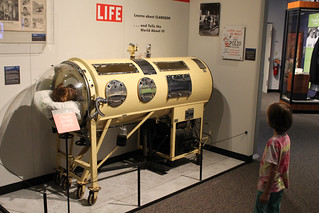 Before we returned home, we swung by the Durham to see some dinosaur bones. They had several model skeletons, skulls, and even a model heart on display — as well as a giant, fully-assembled T-Rex skeleton named “Scotty.” The kids were a little more interested in a giant video screen that superimposed dinosaurs walking around on top of live video of themselves.

We also had enough time for a brief walk by other things, including a buffalo skin, some trains, and an exhibit on polio — which I explained to Hannah that her grandpa had when he was little. It came complete with an original “iron lung,” which a man down the street had to use when my dad was little. Polio is one of those things I’m glad we no longer have to deal with — through the magic of medicine and vaccinations (of which my mom was one of the first recipients).