It’s been another busy week as the countdown continued to the big four-oh. In one week, I’ll be crossing the threshold of another decade, but I’m not officially feeling (or acting) old yet. 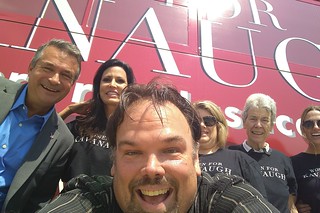 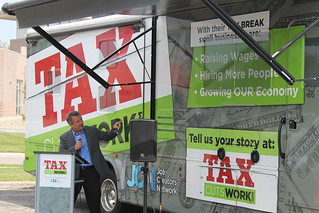 On Thursday, a pair of political issue buses rolled into Omaha, which must be some kind of new trend in politics. The first was a bus from Concerned Women for America promoting Supreme Court nominee Brett Kavanaugh. I arrived late and only got to few minutes meet the ladies on the bus, as well as Congressman Don Bacon, who happened to be among them.

The second was the “Tax Cuts Work” bus from Job Creators Network, which was founded originally by Home Depot co-founder and former CEO Bernie Marcus. The bus parked in the lot of Mutual 1st Federal, and they highlighted the tax cuts passed late last year. Don Bacon was at this bus as well, and they gave him specific credit (and an award) for voting to pass them. The crowd for this bus was a bit larger, and they bus seemed to have more crew members, which included a videographer who filmed the event and photographers who put pictures up on social media. I also saw a handful of familiar faces in the crowd.

I have to wonder what kind of impact a few traveling buses might have on an election or voter opinion, but someone must think it’s worth the money to get them wrapped and on the road. (Maybe I’ll even do it myself.) 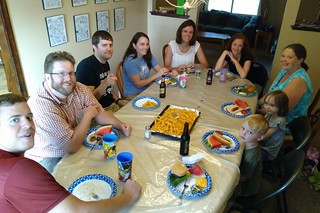 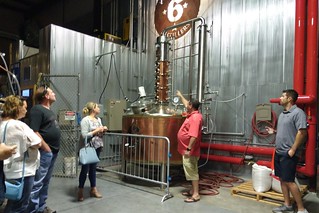 It’s been a good week for food and drink as well. Aldi had ribeyes on sale, so Vivian and I got a couple of them for a lovely dinner (with red wine). Then on Friday, we had a kind of impromptu couples dinner with six of our mutual friends: Anne and Brandon, Lydia and (other) Matt, and Jenny and Kody, who grilled up some hot dogs and burgers for all of us.

Vivian had pitched this as a “girls’ night out” originally, and I learned later it was not just a girls’ night IN, but also a guys’ night OUT. Kody had actually bought a Groupon for a distillery tour and took me out as a kind of early birthday present. He took the other guys and me down to Patriarch Distillers, home of Soldier Valley whiskey, rum, and vodka. We got to see a giant still and various distillery machinery up close and personal, as well as get a taste of some of their spirits. Our tour guide also told us how individuals could invest in their own private label, single-barrel whiskeys that they would make themselves and then have stored on the premises for aging. That was particularly interesting.

The whole facility had a military theme, and a portion of their sales went to various military non-profit organizations. (Also, Don Bacon was not at this event, but he had been there a few weeks earlier with Col. Allen West.) 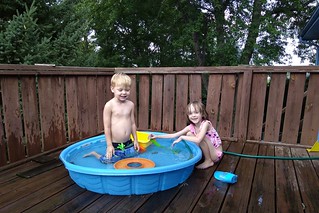 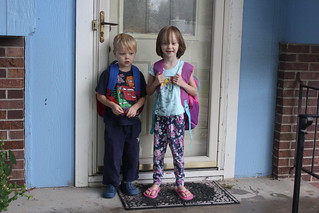 In other news, Donna came back from her month-long trip to California, and she made a gift for us to show that our family rocks. On Saturday, we took advantage of the nice weather by taking the kids to play at Elmwood Park as I did a family photo shoot for our friends Phil and Jen (and baby Gabriel). I also hauled out the wading pool to let the kids get some splash time before the school year started again.

The school year of both our kids officially started on Monday (also Zoey’s birthday for some reason), as Hannah returned to Classical Conversations for extended homeschooling and Aaron began his first year of preschool at Spring Lake Elementary. It feels like time is just passing us by, and my Pebble watch decided to crack on me as if to emphasize the point.